It’s a rarity to find an established permaculture property for sale.  After people spend years—countless hours of research, planning, and design implication—to develop a permaculture site, they generally stay to reap the rewards of all that work. But, sometimes life throws us curveballs, and it would seem that has happened to Addy Jones.

Addy (meet him here) has practiced permaculture for three decades and actually worked several years at Tagari Farm with Bill Mollison and Geoff Lawton. He was amongst the first to complete a diploma in permaculture. Geoff praises Addy for his practical design skills that reveal themselves in artistic flourishes. In addition to being a proficient permaculture designer, Addy is an established surfboard shaper. He has made surfboards for some of the world’s best surfers. He specialises in building boards, as well as buildings and furniture, from up-cycled and repurposed materials. He also spent a decade creating an organic range of animal health products—all from the natural world—while caring for injured wildlife.

Addy is selling his 6.5-acre property in Binalong Bay, Tasmania. A stand alone property he designed himself—one where the only bill is the rates! He will leave behind a 7X11 meter shed converted into a studio apartment, and there is a septic tank (suitable for a 4-bedroom house) installed. Completed earthworks include four dams fed by a seasonal creek and other water catchment features that fill them. There are heaps of good garden sites to choose from, solar electricity, and abundant wildlife, including sea eagles, penguins, wallabies, wombats and black cockatoos. The property has outdoor rooms, fire pits, its own bike trail, and a 50,000-litre water tank. Quirky and clever projects are dotted throughout.

The location (114 Gardens Road, Binalong Bay, Tas 7216) is fantastic. Crown land borders it on three sides, and it fronts Grants Lagoon in The Bay of Fires region of northern Tasmania. The Bay of Fires is regarded as one of the best fishing and surfing regions in the world and it’s a five-minute walk from the front gate. St. Helens Mountain Bike Tracks are only ten minutes away as is the town of St. Helens itself, which has a new hospital and all of the other amenities towns have, particularly coastal towns. It’s the largest town along the northeastern coast of Tasmania and is the state’s second biggest fishing port.

For more information or to book a viewing, check out the listing here. It’s definitely worth a look, whether you are in the market or not.

The Permaculture Student 2: A Guidebook For The Future 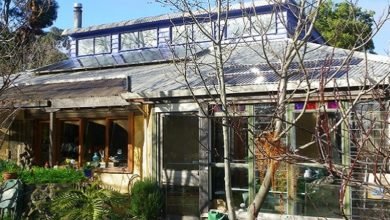 A rare opportunity for multiple occupancy in Central Vic

Selling the Family Plot of Gold

Perming the ‘Burbs in Queensland, Australia

How a Single Women Transformed Her Urban Garden into a Productive, Organic, Tropical Paradise

What is a Refractometer and Why Do I Need One?

Save the World, Without Giving Your Money Away!