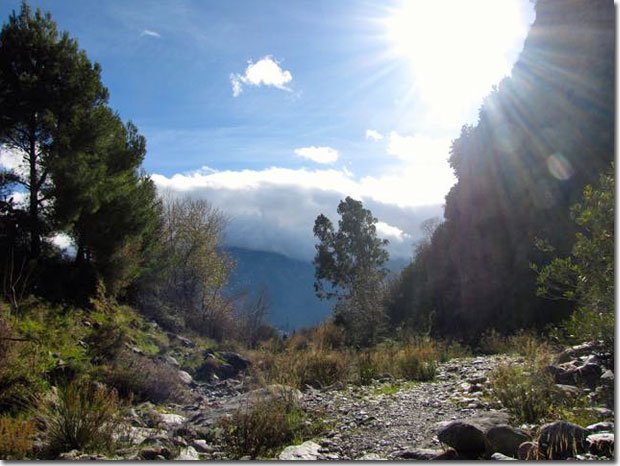 This became a favorite spot for our daily hike, after a morning’s work, lunch settling in our bellies as we scuttled across the rocks of the Rio Chico under the afternoon sun.

I’ve always liked the idea that, once a permaculture system is in place, the largely perennial garden will not merely survive but actually thrive without you. My wife and I have started this year volunteering on farms in Spain, and at our second post, we got to witness this very aspect of permaculture—self-sustaining, expansive longevity—in all its fleshy greenness.

Our current location—Orgiva of Spanish Andalusia—is a famous spot for those interested in innovative agriculture, experimental energy systems, and an uncommonly accepting community. Spurred by a wonderful book, Driving over Lemons, by Chris Stewart (a former rock-n-roller turned farmer), tourists and merry bands of land rovers (and Land Rovers) began showing up all over the area. 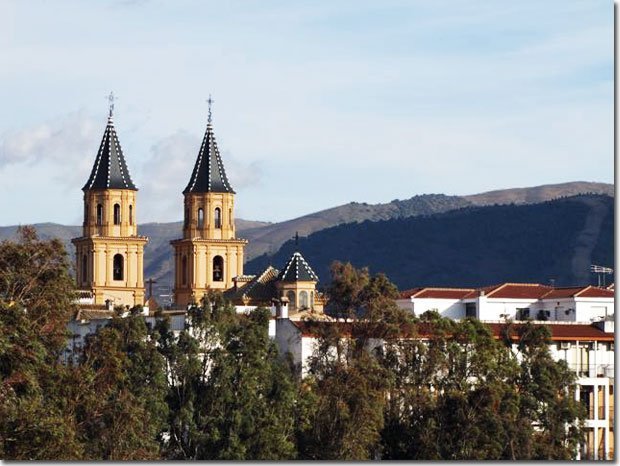 Really a small village, Orgiva is alive with activity, with a large percentage of the residents devoted to different ecological and sustainable system pursuits. Such is the case across Andalusia.

Jasbir and her late husband, Peter, were one of many expat couples who just felt the draw of this place. They came here to visit a friend, a sojourn from the typical British holiday in Costa del Sol, and a few years later, they were the proud owners of a finca. And, they decided it was going to be of a permcultural persuasion.

About Andalusia and Agriculture

Andalusia is a special region in Spain. It holds the most prolific of the autonomous communities in the country and is renowned for its beautiful shoreline along the Mediterranean. It’s dotted with famous cities, like Granada, Malaga, and Seville, but also it boasts hectares upon hectares of agriculture, with special attention to citrus, almonds, grapes, and particularly olives. 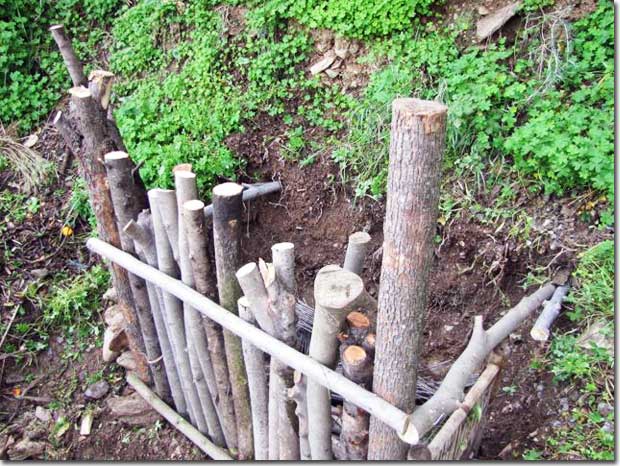 I roughed together this quick compost bin for food scraps from the kitchen. Before Jas had been carrying her scraps uphill about a hundred meters away. This was just on the far edge of her patio and made from pruned branches that needed clearing.

Agriculturally speaking, it has an interesting feature courtesy of the Moors, who ruled here for the nearly a thousand years. When the Moors first arrived, they discovered Roman irrigation systems that had been abandoned, and they both repaired and extended them into a mesmerizing watering network that is still in use today.

With these interconnected acequia (ditches) and alberca (pools), the arid landscape is kept abundant, and you’d be hard-pressed to find a plot of land—from yards to patios to roadside medians—not devoted to the growing of something edible. In that way, it’s no wonder that Jas and Peter couldn’t resist it. Frankly, as I sit in the midst of it all now, writing, I can’t help but daydream of owning a plot of my own.

Upsetting the Order of Things Jas’s food forest was a wonderland of produce, tree limbs truthfully bowing under the weight of fruit and with amazing diversity to choose from.

Of course, as is the case with many agricultural undertakings, things have gotten thoroughly systemized here. Land is often kept very tidy, the trimmings of olive trees ceremoniously burned away each winter, the ground surrounding the tree trunks kept bare and raked into concentrically circular ridges. Groves are in uninterrupted rows, with hectares upon hectares of singular crops. Economically speaking, the most marketable of all of Andalusia’s produce is hothouse grown.

So, when Jas and Peter set about with their—at that time relatively unknown in these parts—brand of agriculture, it was to the horror of many locals. The farm was regarded as messy with greenery growing everywhere, a carpet of clover covering the hillside, wild edible weeds sprouting every which way, the trees mixed and insufficiently pruned. They, not just in country alone, were out of their element. 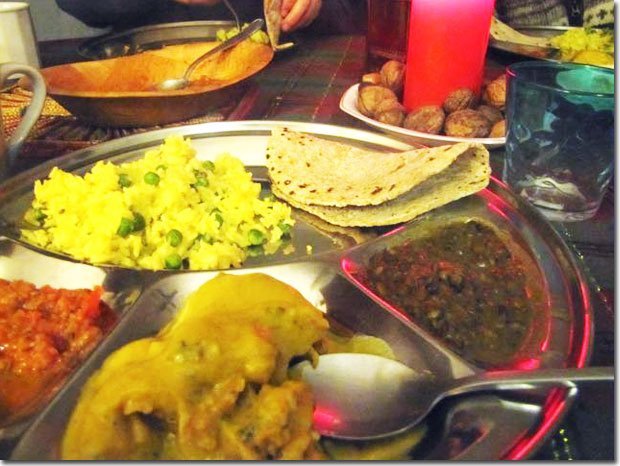 Jas, a Brit of Indian heritage, fed us with some delicious dishes while we were there and, in the early days, actually ran a take-out food service from her kitchen.

However, the garden undoubtedly produced, all sorts of citrus varieties, branches heaving with lemons, mandarins, navel oranges, pomegranates, Valencia oranges, satsumas, and tangerines. There were figs and persimmons next to olives dropping alongside walnuts and almonds. Grapes grew up the arbors and along the ridges, a cherimoya (a delicious cousin of the soursop) near the kitchen door. Amongst the grasses, there were salad greens: sprigs of rocket, species of spinach. There were native herbs like lavender and lemon balm. Stuff everywhere, growing a bit too wild for some.

Survival of the Wildest

While this sort of crop mixing, as well as the live-and-let-lie method of cultivating a permaculture food forest is not so unfamiliar to me anymore, what made Jas and Peter’s plot remarkable to see was that it went from wild to wilder. Sadly, when Peter passed, Jas went home to England for a few years, unable to face the farm without him. Everything actually was left to its own devices, and … 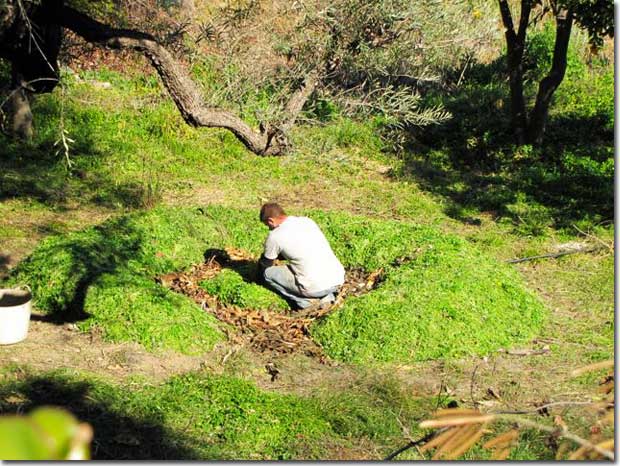 It seems every new hugelkultur I participate in excites me for a different reason. This was my first attempt at using a keyhole bed design with hugelkultur technique. Here I’m planting a cherimoya, or custard apple, at its center.

It all worked. Not only did the trees keep producing in abundance, but seeds started propagating themselves (as if nature had intended it this way), saplings sprouting up in new places, where they were never intended to be (like in front of the gate). The old lettuce beds simply continued along on their own. Things grew larger, stronger, stretching both comfortably and uncomfortably within and amongst one another. A wild, largely edible forest had taken on a life of its own.

When Emma and I arrived at Jas and Peter’s property, she’d only just returned. Realizing that things had grown beyond productivity, she’d hired a local pruning maestro to clean up the overgrowth, and in turn, he’d left her with severed limbs everywhere. They were blocking the pathways, congesting the terraces, even spilling onto the roof of her villa. 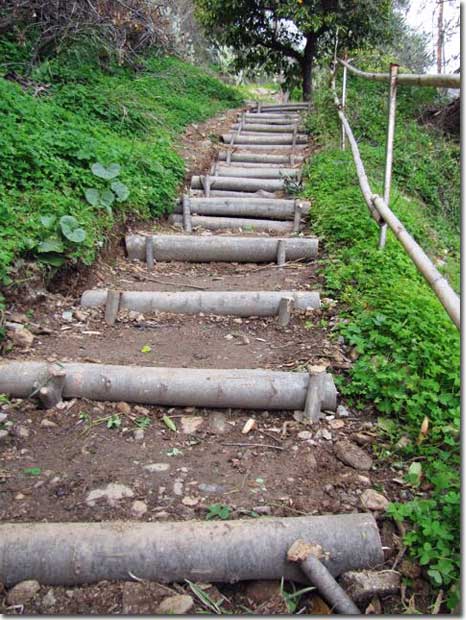 On her first day, Jas struggled to get up a hill while giving us a tour of the place, so one of the first projects I took on was taking some of the pruned branches and building her a staircase to climb.

An Introduction to Hugelkultur

Now, of course, a windfall branch or even tree isn’t such a problem as it is a wonderful opportunity for nature to take advantage: It falls, rots, and feeds everything around it, all the while providing fodder and habitat for insects and other animals. But, when pruning is done on such massively human scale, it presents an instant and hulking amount of organic matter, problematic in that it makes a space largely inaccessible for a nearly seventy year-old grandmother, like Jas. It was our job to sort it all out.

Seeing such an abundance of wood, and being such immense fans, Emma and I immediately thought of hugelkultur. Quickly, for those unaffiliated with the method, hugelkultur is a live action composting system in which wood, especially large pieces, are buried so that as they slowly breakdown beneath the soil, they’ll feed the plants growing atop them. What’s more, it’s a perfect solution to something Jas was presently missing: vegetable patches. The technique can result in years of fertility. Jas had never heard of it, but she soon put her budding Internet skills to good use and got wise. 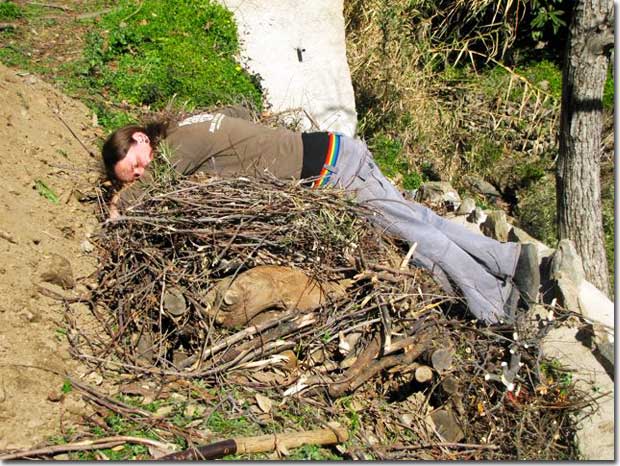 This was our first hugelkultur bed on the site, a massive block of wood probably three-square meters worth, that Emma and I completed from start to finish in just a few hours.

So, we started breaking down the limbs into useable parts, some of it going the way of firewood, some of it churned into chop-and-drop mulch, some of it begrudgingly burnt (not something any of us like to admit now), and some of it buried to create large mounds, promising planting grounds for the future. It’s an exciting thing, gardening this way, to think about what’s being done now only makes for a healthier and more productive future. And doing so, I can only imagine what it felt like putting in all of these trees.

A Variety for Visitors

It must have been quite the adventure watching this place—both the farm and the region—blossom into something so inspiring. Nowadays, innovative farms are dotted throughout the valley, into the Sierra Nevada mountains, and over to the coast. A quick look on HelpX or WorkAway will reveal all sorts of opportunities for work-stay volunteering, and there is reportedly still affordable land to buy. There are interesting sites to visit, such as Beneficio (a plot of land left to the public and upon which people are allowed to live for free), Sunseed (a desert project devoted to low-impact living), as well as villages and cortijos (rural habitats) down every road. 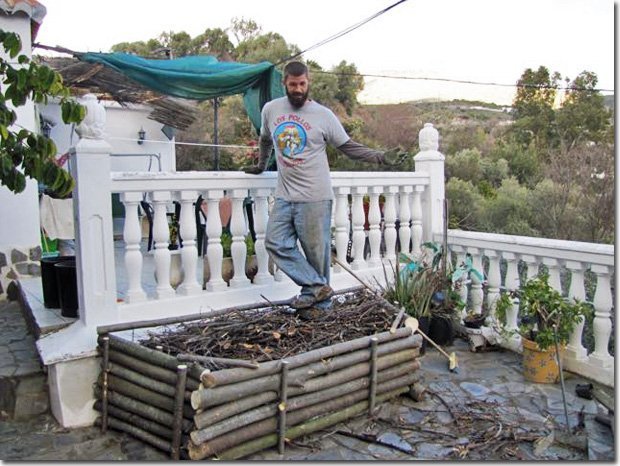 It was a great time, and we felt fortunate that Jas got so behind the hugelkultur bonanza we started. She even asked us to build this experimental raised-bed hugel mound on her patio.

Why Walks in Nature are So Permaculture