I love discovering new, useful plants to incorporate into garden design schemes. Of course, there are a great number of plants many of us have never heard of, let alone know how to utilize, but one of the great things about the permaculture mindset is that it constantly yields wonderful, unfamiliar flora to cultivate.

There are many ways a plant or tree can be useful. Food is one that we most readily address, but the ideal is to find three or more uses for the things we devote our time to nurturing. Some plants are great pioneers, fixing nitrogen into the ground or mining minerals from deep below the surface. Others provide good wind breaks, privacy screens or living fences. Flowering stuff can attract pollinators. Fruiting stuff can feed wildlife. Woody stuff can provide fuel. There are all sorts of reasons to grow something.

Recently, I’ve been working on a design for a property in North Carolina, just at the foot of the Appalachian Mountains, and I’m discovering some wonderful new plants and delving further into some familiar ones. The part of the design that I’m working on is a productive, mixed hedge border that will act as a privacy barrier, deer thwarter, and productive forest garden. In doing so, I’ve become really excited about some of the plants I want to include, and I thought I’d pass some info along.

To be completely honest, after spending my first season around this tree blooming, I knew that I’d really like to have one around. A few weeks later I noticed pods hanging from them, and that’s when the whole mimosa treeendeavor got more interesting. Not only do they have fragrant, pompom flowers, but they are nitrogen-fixers.

That was exciting enough, but the list of attributes my research unearthed was even greater. Unsurprisingly, bees and hummingbirds love the flowers. However, I also learned the young leaves could be used a pot vegetables, and blossoms are edible as vegetables.  Plus, it’s a fast-growing tree that can be coppiced for firewood.

I’m almost ashamed to say that I’d also declared a love for redbud trees prior to knowing any uses they might provide. Seeing them flower out in early spring was an amazing experience. The flowers, more magenta than red, stood out vibrantly against a still largely barren tree-scape and seemed to scream the seasonal change was coming. They were beautiful.

Not long into this affair, a friend informed me that those lovely flowers were also edible. In fact, the redbud buds have an exceptionally high vitamin C content, right when the supply might be running short. The tree is also a legume, though its nitrogen-fixing abilities are debatable. The bark can be used medicinally for treating colds or as cordage for basketry. There is even documentation of Native Americans eating the seeds broiled. 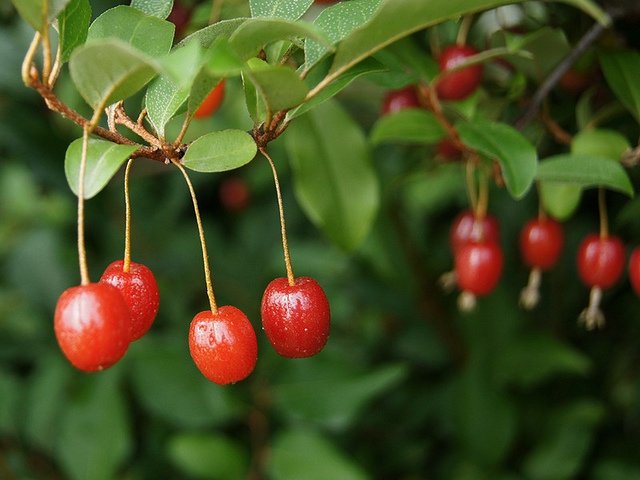 Technically, goumi—aka cherry silverberry—and silverberry are two different plants, but I discovered them looking into serving a very similar function. Closely related to the somewhat infamously invasive autumn olive (Elaeagnus umbellata), they are both nitrogen-fixing shrubs with edible output that can work in the understory of this mixed hedge. And, they both tolerate the temperate wintertime chill.

Goumi fruits are much beloved, and even the seeds are edible. They can also be trained as dense hedges; however, they are deciduous, which is what lead me to straight-up silverberries. Silverberries have a less respected fruit, though still consider eddelicious and with an edible seed, but they are evergreens. For my design, that means the privacy barrier aspect remains intact throughout the year. 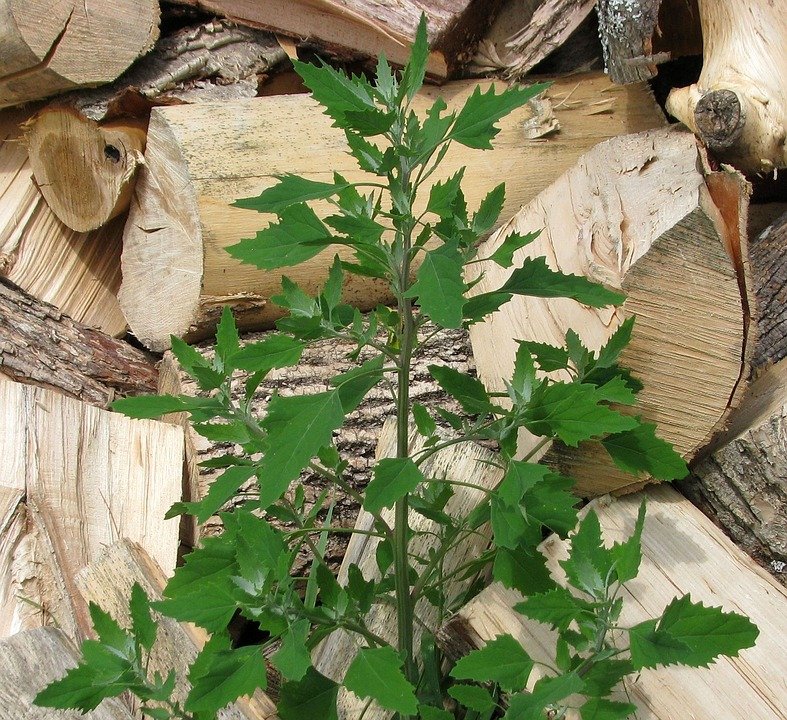 Considered a weed by most, I spent the better part of the early summer eradicating them from a garden I was paid to look after. However, I transplanted a number of them home to our garden, where we have been enjoying them immensely. Lambsquarter is a widely recognized edible weed, but one that traditional gardeners have learned to detest. Not us.

Aside from being really tasty, lambsquarter is highly nutritious. It’s also very versatile, able to be eaten raw, added to pots, or—most recently—substituted for basil in “pesto”. The roots and seeds are also edible. And, it pulls up so much salt mineral (a dynamic accumulator) from the soil it can be used as a salt substitute. Plus, it’s a weed, so it doesn’t want for any labor, just a place to grow. 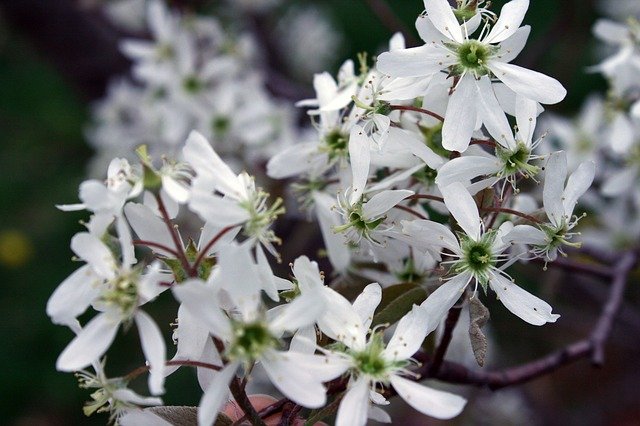 A family of deciduous shrubs, actually part of the rose clan, that are more often used ornamentally, serviceberries are belovedfor early spring blooms and amazing foliage displays in the autumn. However, there are several varieties, including “Juneberries”, which have notably delicious fruit, comparable to blueberries.

What caught my eye about serviceberries was that some were listed as deer-resistant (occasionally damaged), though juneberries haven’t made that list. Nevertheless, I was taken by the utility this family of plants had to offer. And, I love blueberries, so the thought of having something around that was similar sounds pretty nice. 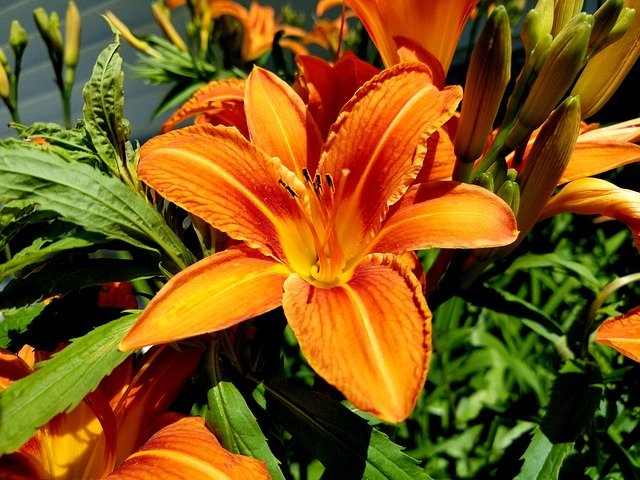 Daylilies are one of those cases when the Latin name actually means a great deal. In the 1700s, an orange Asian daylily was brought to the United States, and it has since spread along the roadsides like a weed. That species, Hemerocallis fulva, has many edible parts; however, the cultivars of daylilies resulting from it do not all have these qualities. Some are toxic.

In my case, the weed-like version, locally referred to as tiger lily, is plentiful. They transplant well, spread in clumps, and make showy displays for several weeks in late spring and early summer. They are resilient plants that can be dug up for tubers and put back in the ground to grow again. In fact, deer will eat them to the ground, but the plant survives and grows anew. Plus, I can harvest them wild from the roadside. 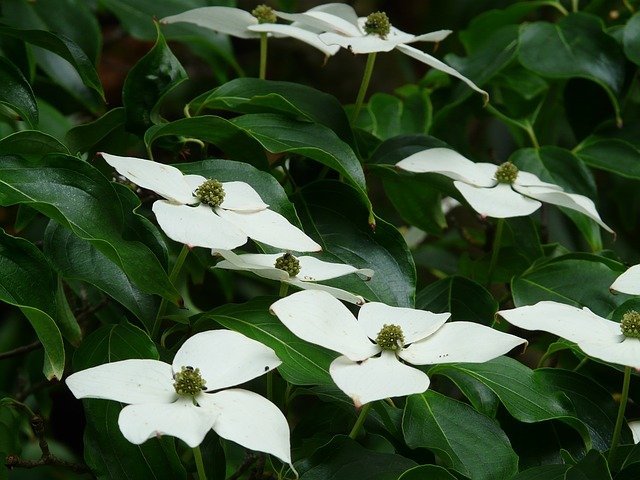 Western North Carolina is wrought with rhododendron and dogwoods that put on some renown flower displays in the spring. Slightly later in the year, the Kousa dogwood, also known as the Japanese or Korean dogwood, fills its boughs with white flowers. The flowers of this cultivated variety are distinctively different, but as striking as the buds of the native one.

The other major positive of the Kousa dogwood is that it puts out an edible fruit that provides a tropical flavor. For me, having lived in Central America for years, I like that thought. Plus, the young leaves are edible, which could help in leaner times. What’s more is that the Kousa dogwood is remarkably disease- and pest- resistant. 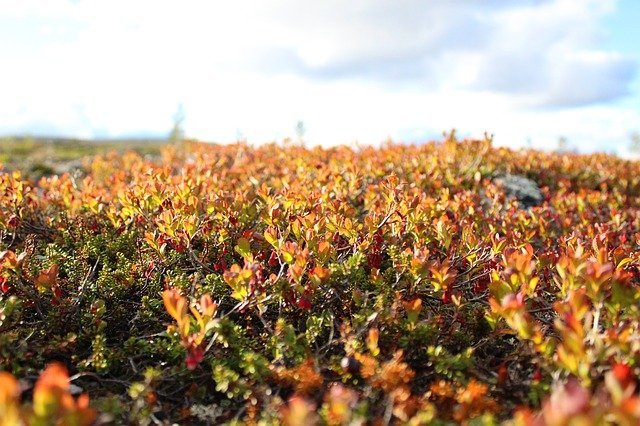 These are plants that have me buzzing lately. I’ve compiled a list of several others that I hope to include in the mixed hedge/boundary food forest: Elderberries, chinquapin (a chestnut shrub), American pawpaws, and strawberry trees. There will be a mix of wildflowers, particularly native black-eyed Susans and naturalized daffodils. I’m hoping to include comfrey, borage, hosta, and elephant garlic as an herbaceous layer. And, I’ve been looking into several edible groundcovers that are new to me, such as lingonberry and cherry berry wintergreen, along with a mix of mints and oregano. I can’t wait for it to begin to materialize.

The primary purpose of this space is to create a visual break between a gravel road and a home, but playing with the possibilities has really captivated me. It’s the opportunity to steer out of traditional fruit trees that would be included in a mixed orchard and take a more obscure route to production, a place where foraging will feel more like an adventure.

Other Articles by Jonathan :

What do lizards, procrastination, and Permaculture principles have to do with your brain? Part 2

Why is Sustainability Important?

What is Aquaponics and How Does it Work?