Free Range Studios have been doing an outstanding job of boiling important topics down into user-friendly sound bites that encourage the viral spread of thought-provoking information. We’ve seen The Story of Stuff, The Story of Cap and Trade, and now I introduce you to the latest in the series – The Story of Bottled Water: This might be hard for the average world citizen to understand, but I remember, after growing up in a land flowing with pristine water supplies (New Zealand) and then heading overseas, being rather surprised – even shocked – to be introduced to the concept of buying water. Coming from the heart of an island covered in stream- and river-laden mountains and valleys, the thought of surrendering my hard-earned cash for a bottle of water seemed obscene.

To me it was just one small step away from companies selling us the very air we need to breathe.

In some of the places I lived and visited, people regularly purchased bottled water due to the perception it was healthy or due to suspicions about the local supply. I remember the water industry being big business in Australia. In some parts of Sydney, at the time, a poured glass of tap water always had a slight yellow tint to it. This bothered me, and so once I placed a full glass of water on a bench, determining not to move it for a week or so. After about five days the water in the glass became perfectly clear – except for a 5mm layer of thick brown sludge at the bottom….

This experiment told me there are, sometimes, valid reasons for concern about tap water in places. But, from what I’ve seen, this is the exception rather than the rule. Many studies around the world have shown tap water to be just as good (and often better) than expensive bottled water. (Often bottled water is tap water.)

Unfortunately, the last time I visited New Zealand I discovered the wonders of modern marketing had done their thing in my absence – as almost every supermarket and corner store has bottled water from France, Wales, etc. If New Zealanders, with their gloriously pure aquifers, can be convinced to buy water from the other side of the planet, it does leave one a little dismayed with industry motivations, and the gullibility of consumers….

Depending on where you live, your tap water is likely to be just as good or better than bottled water – but if not, consider having a filter system installed in your home. The one-off cost will soon be repaid in savings, and immediately compensated with peace of mind – not only in regards to your personal health, but also in regards to your environmental footprint.

What kind of future are we financing with our bottled water purchases?

Aside from health and environmental concerns, there are freedom and justice issues at stake here too. Another important reality is that our above-mentioned gullibility in surrendering to BigWaterCorp’s media marketing is financing the growth of mega-corporations who are working hard to control the world’s water supplies. These profit-centric corporations seek to privatise this precious resource under the guise of ‘managing it more efficiently’, but in reality they’re setting the stage for a future where only the wealthy (think well financed industry with a thirst for great quantities of water for their processing requirements) have access to the blue gold (highly recommended reading). Continued water conflicts will be the result. The following clip is a snippet from The Corporation documentary, and looks at the result of water privatisation in Bolivia in 2000, where San Francisco’s Bechtel Corporation won the bid for control over the water supplies of the country’s third largest city, Cochabamba. The company immediately jacked up prices to unaffordable levels and it even became illegal for people to collect rainwater without a permit. Several people were killed and hundreds were injured, many seriously and permanently, in the resulting unrest – until Bechtel was finally ousted and run out of town. 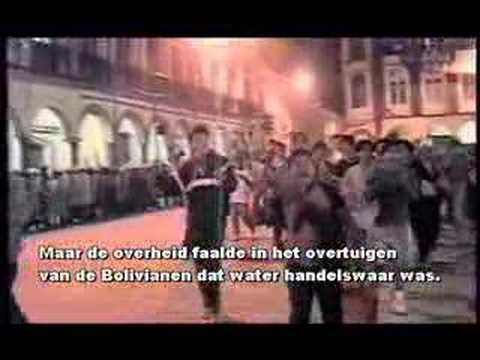 As an aside, last year we even observed the strange irony of World Water Forum protesters being subued by having water cannons turned on them by Turkish police. This is a scenario we’re seeing all too often – security, police and even army forces being utilised to enforce the ‘rights’ of Big Business. We are in effect financing our own subjugation through taxes and through being ‘good consumers’.

One of the ‘constants’ we observe and design around in permaculture is that water always flows downhill, and at 90 degrees to contour. This is true in natural systems, but in economic systems it’s also true that water flows uphill, towards money. Let’s not be the source of that funding. Reusable water bottles, water filters where necessary, water harvesting – they’re all ways to bypass the money machine and ensure water remains a human right and not a commodity managed for private profit.