At the end of last summer, Emma and I finally found the property for which we’d been searching for about half a decade, and though it isn’t in Central America as we’d originally planned (it’s in North Carolina), it has ticked off all the items on our list: an acre of it already cleared, existing forest, and a healthy stream running through it all. It fit the budget, is the right size, has the ideal aspect, and allows freedom with development.

There were even some bonuses. A picnic shelter with a good slab and roof is on the property, so we’ll be closing that in for a cabin. We are also only three miles from a prominent state park (Stone Mountain State Park) and one mile from a national park (Doughton Park, part of the Blue Ridge Parkway system). In other words, in terms of wilderness, we’ve gotten more than what we wanted.

Also, in terms of not clearing land to build a homestead, we got exactly what we wanted. More important than the wild space to us was not damaging wild space to get the homestead we wanted. That was a very hard idea to get across to real estate agents, as well as friends and family. We didn’t want to have to clear trees to build a home, and with good intention, folks would often say, “Yes, but it’s just a little.” We were convinced it didn’t have to be any.

On this side of the purchase, I just thought it might be productive or inspiring or reassuring for others to know the process we’ve gone through to get here, as well as what’s ahead of us.

As I said, originally, we were searching for land in Central America, which has two seasons: wet and dry. During the wet season, things grow voraciously. During the dry season, moisture is at a premium. There can be several months without rain. So, having an alternative source of water, even beyond rooftop water catchments, makes an enormous difference in terms of drought-proofing. We knew we needed a stream or a constant source of water. Ultimately, we decided this was important wherever we were because we wanted a place to swim, bathe and cool off.

Like many people who get into sustainable, natural living, we have a passion for being outside and, in particular, in the forest. We like to walk in the woods. We like to spot wildlife. We like to find ourselves in secluded areas. We like to forage. We’d idealised the notion of a forest surrounding our property, creating both a privacy boundary and providing an immediate Zone 5 to enjoy. We knew we could potentially grow that, but if we could find a place with it, that would be huge. We wanted to be close to or in the forest.

We also, however, didn’t want to cut down any trees. In my heart, I felt the appropriate location for a permaculture site would be one that had already been scarred by the presence of humans. That most likely was going to be in the suburbs or the city, the opposite of where we — in our hearts — wanted to be. Countryside or not, it was imperative that our place have a cleared area, and we were hoping for roughly an acre, to develop.

We had other stuff, too. Being in the northern hemisphere, we wanted a south-facing (sun-facing) slope so that we could have passive solar heating and solar energy. We wanted to be off any busy highways. We had imagined somewhere in the 2-5 acre range (0.8-2 hectares), partly because that fit our budget (approx. $25,000 USD but no more than $30,000) and partly because that meant enough space for both forest and development. We also needed a location without a lot of restrictions, somewhere where we (not a construction company) could build a cabin and grow a big garden. 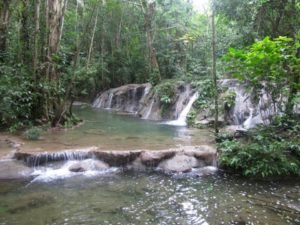 Despite it taking far longer than we expected, moving us through three countries of searching, and consuming hours of time on the internet, we stuck to our checklist. We felt like it was reasonable. We were looking to invest our savings into something, and we didn’t want to do it lightly or rashly. We thought that, if we were patient, the right place would come along. And several did.

The first property we tried to buy was in Guatemala, near Las Fronteras on the Rio Dulce. It was about seven acres with existing fruit trees, including citrus, plantain and coconut. It had a small river running through it, with a beautiful bend overhung by construction grade bamboo. It had plenty of forest and plenty of cleared land as well. We’d agreed on the price of $28,000, and as we were lining up a lawyer, the owner of the property found someone that would give him cash without going through the legal system. Despite our agreement, he sold it to the other buyer.

The second property we tried to buy was in Belize, maybe half-an-hour east from Punta Gorda, along the Caribbean coast near the southern border with Guatemala. It was 14-plus acres with a creek, including several waterfalls and pools, running along the boundary. It had nice forests and lots of cleared space. It even had small ancient Mayan burial sites, something somewhat common in the area, which is scattered with jungle temples and modern Mayan settlements. We’d agreed on $30,000 and spent the next six months living there and trying to pan out the legalities of the situation. In the end, the person selling us the land didn’t actually own it. It had once been his grandfather’s.

The third property we tried to buy was in southern Virginia. It didn’t have its own source of water, but a river ran about a quarter of a mile (0.4 km) away. That river was part of state protected land/forest. Plus, rain was more consistent than in the tropics. The site was three and a half acres, most of which was cleared, save for a tuft of forest in the middle of it and a line of trees surrounding it. It was a south-facing slope with a gorgeous view of the Blue Ridge Mountains and huge potential for swales and a pond of its own. It was priced at $30,000 as well, and after a week of contemplating it, we made our offer. It had sold during the week.

Though it took ages to get where we were going, I think we had a couple of things that helped us get through that. There were elements of our search that kept it alive. I don’t think everyone will have the same advantages, but the point is that, while we weren’t flexible on certain things, having some wiggle room elsewhere served us well. We never thought we’d end up in North Carolina. We never thought it’d take us four or more years to find a place. However, we didn’t have much in the way of obligations or bills to try to keep up with. What we had was a vision for a place to make a home.

We never got completely fixed on a location. Emma (from England) and I (from the US) had lived abroad for 12 years. We’d switched countries nearly every year, and we felt comfortable that we could make a good home wherever we were. So, when Guatemala didn’t seem to work, and Belize didn’t seem to work, and Central America didn’t seem to work, we were able to adjust. Location was never part of our checklist, and that meant that, when we felt we’d exhausted what was available somewhere, we had a next step: somewhere else. North Carolina, by unforeseen circumstance, became the place.

We never rushed ourselves. It’s very difficult in the excitement and anticipation of the moment to jump the gun and get something that feels almost there. We considered a few places like that. We talked them over and how we might make them work. In the end, though, we never forced something to be right when it wasn’t. The property we’ve ended up with (we’ll get to that again in a minute) isn’t what we originally envisioned, but it is in keeping with what we wanted. And, as with the other places we tried to buy, we knew it was right — a sort of love at first sight scenario — when we saw it.

Emma, an ESL teacher, wasn’t able to work — at least for money — through much of our search, but we did a lot of work-trading via HelpX (similar to WorkAway and WWOOF) to provide for room and board. I had my freelance writing to provide the basic income we needed otherwise. We got boosts here and there. Emma taught in Antigua, Guatemala. She managed an eco-hotel there. I ran a farmers market for a while. I taught at a couple of community colleges once we got to the States, and once she got a green card, she started teaching online in the mornings. We kept our bills to a minimum and never overextended ourselves, even when that meant living in less than ideal situations. We kept our savings as savings, set aside for our homestead. Things eventually fell into place.

In July of 2018, we found our place. It took us one month to buy it. It’s 4.66 acres (1.88 hectares). Check. It has two year-round streams on it, as well as a dam that’ll make a great swimming hole. Check, check. It has over an acre cleared and over 3 acres of forest. Check, check. Not only is it on a south-facing slope, but the picnic shelter as is could not be more perfectly positioned for passive solar heating in winter and passive cooling (roof-provided shade) in the summer. Check. It cost $32,500, which was over our budget but more than balanced out with the infrastructure — dam, slab, roof, well — that was already in place. Check. To put it bluntly, we did it.

Now, that by no means has meant smooth sailing. We spent half a year, November to April getting our septic system/permit situation sorted out, a state requirement, even though we plan to do a composting toilet and grey water system, which are somewhat frowned upon. We are in the process of a getting a building permit, which requires an engineer to sign off on the existing roof or tell us how to reinforce it so he will sign off on it.

We’ll have to hire certified people to do the plumbing and electricity — legal requirements — rather than doing it ourselves as we’d originally hoped. The dam and well are in need of repair. We are finding that buying the property was only the beginning of making a place a home. Surprise, surprise.

That said, finding the right place has made a world of difference. It’s made us resilient, and it’s given us a property worthy of the sacrifices we are now making. In fact, it was worthy of sacrifices we made long before we’d seen it. I want to say that properties like these are still out there to find for those who are trying to balance permaculture ethics with personal desires. It is possible to do both.