Willi Paul: Is there a global permaculture revolution rising now?

Craig Mackintosh: Well, there had better be. The other kinds of revolution aren’t pretty. Revolution, I believe, is going to become an increasingly popular word. But often revolutions merely pull things down, without offering meaningful replacements.

Over the last few years the level of interest in permaculture has skyrocketed. People are increasingly realizing the world is running out of options, but many are also realizing that this is exactly what permaculture gives to the world – options.

WP: What are the pros and cons of a world-wide database?

CM: We need people to see the breadth and scope of permaculture activity. If people facing resource depletion and economic meltdown believe that permaculturists are just a handful of scattered, idealistic dreamers, they’ll say to themselves, “nice idea, but too little, too late”, and they won’t get on board. If, instead, they realize that this is actually a worldwide movement of individuals operating at a grass roots level in almost every country on the planet, then they’ll instead think, “hell, I’d better get involved as I’m getting left behind!” Given where we’re at in history, getting left behind in essential re-skilling and future-proofing is not an attractive position to be in.

We’ve always known that permaculture was widespread – permaculturists are on the ground everywhere – but, due to its inherent, decentralized properties, its extent has, until now, been hard to quantify. The Worldwide Permaculture Network (WPN) system will solve this.

The pros are that people who are doing tangible things to change the world for the better right now have a chance to inspire others to do the same – and to demonstrate and educate them in the how of it – whilst simultaneously, and symbiotically, gaining increased knowledge themselves through interaction with other permaculturists in the system. More, they can network with each other and leverage each other’s efforts.

The cons? Well, perhaps just that I will now have even more work to do. But, it’s a small price to pay for saving humanity.

WP: Can you chat live with folks on Worldwide Permaculture Network (WPN)? Can you upload videos?

CM: Not yet, but we have quite a few things we’d yet like to build into the system. So far, with the exception of a few thousand dollars of much appreciated donations from our readers, we (the Permaculture Research Institute of Australia) have carried this on our own. It’s been quite a commitment in time and financing. We trust that the new WPN community will see the potential in what we have, and also in what we could have yet with further development, and will pitch in to tailor and improve even further.

WP: Will you obtain advertisers or other financial support?

CM: Advertisers? Selling products? You’re kidding, right? Given that we don’t live on an inflatable earth, permaculture is about developing steady-state, sustainable, community-based economies. The self-interested, impossible, economy-must-grow mindset is the antithesis of what needs to happen over the next decade, and is thus the antithesis of a PERMAnent CULTURE.

I won’t allow advertising on the WPN.

Offers of financial support from people who understand the vision behind what we’re trying to achieve would be welcome. Indeed, they’d be welcome even if they don’t understand – so long as there are no strings attached. The key thing to know is that this system is not a profit-motivated venture.

WP: What is sacred about the practice of permaculture?

CM: What is sacred is our inherent right to live free and gloriously. Permaculture equips people to be more than mere drones for a system outside of their control. It frees people to live as skilled, self-reliant individuals who work interdependently with other self-reliant individuals, with the goal of obtaining a lifestyle that is centered in health, positivism, resilience, beneficial social interactions and sustainable productivity.

WP: Are there new stories and songs based on permaculture? What are some symbols in your passion with the land and people? Who are your heroes? Talk about the spiritual and the interconnected as possible catalysts for new myths.

CM: Perhaps I’m too pragmatic to really understand what you want here. I haven’t been following stories and songs, and really don’t know what you mean by symbols. I’m also not one for encouraging the hero mentality. We need to be everyday heroes. All of us. After taking on board the realities of what our collective futures will look like if we give in to despondency and inaction, we can become heroes by, instead of letting it get us down, realizing that the only way forward is to start to look at where we are now – our vulnerabilities and our opportunities, as slight as they may seem – and, comparing that objectively with where we need to go, beginning to make steps towards getting there. It will take a level of cooperation never seen before in human history.

I believe the WPN can become a platform for these everyday heroes to make themselves known, and to replicate themselves – sharing skills, seeds, designs, inspiration and enthusiasm.

WP: Are you an alchemist?

CM: I’ve never been described thus before, and don’t lay claim to the title now. Besides, you can’t eat gold.

In my work, however, I have met a few who can turn sand and rocks into fruit and forests, so perhaps some permaculturists could be described as alchemists of sorts.

WP: So WPN is an open network? Is this a permaculture principle?

CM: All who align themselves with the three ethics of permaculture – People Care, Earth Care, and Return of Surplus (back to the first two ethics) – are welcome to join and contribute to the community. The big thing to understand is the WPN is not, unlike Facebook or similar, merely a social club, nor is it a system designed for profit. The WPN is intended to help facilitate well-meaning, collaboratively-minded permaculturists to inspire and educate each other into the kind of world-changing activity we need to see if we’re to head our multiple impending woes off at the pass. While the WPN is not going to be for absolutely everyone, the aim is that its purposes will ultimately come to be shared by all.

WP: At this early stage, how would you describe the common shared vision?

CM: ‘Permaculture’ has been a word for more than thirty years, yet, over this period, many permaculturists treated the design science as merely ‘an alternative lifestyle’ — keeping one foot in their back yard and the other in the supermarket and their almost-always destructive places of employ. Over the last few years this has been changing. The internet has enabled writers like myself and others to join the dots online like never before, and now there’s a sense of urgency that no matter what little oasis of abundance you may have in your back yard, if all your neighbors around you and across town don’t have any degree of resilience themselves, then as the economic and social fabric of society continues to come apart, you’ll still not make it on your own.

In the same way as we’re learning that an apple tree has far more value than a plasma screen, we’re also recognizing that a neighbor with skills to share is worth infinitely more than a drinking buddy.

Permaculturists – this is our time! Let’s stop considering permaculture as an ‘alternative lifestyle’ and accept the fact that there really is no alternative. As far as our place in history is concerned, it’s permaculture or bust. – Craig Mackintosh

What is the alternative, Craig?

CM: Well, we could just pretend, as do the politicians and fantasists, that everything’s just peachy. We could pretend that the scientists will invent our way out of this (ignoring the fact that they invented our way into it). We could also all sit in a circle, holding hands, chanting, and thinking positive thoughts. For myself, though, I’d rather get busy. The WPN is for all who feel the same. 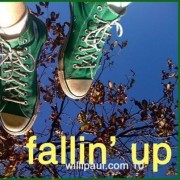