We’ll start the post by introducing the format for our polyculture profiles and then go on to look at a simple 3 species, perennial polyculture that produces a bounty of asparagus for us each year, provides habitat for wildlife, is easy to establish and requires relatively low maintenance.

The polyculture schemes as presented are offered as a starting position as opposed to a finished article. It’s also worth noting that how a polyculture performs will vary considerably from site to site due to climatic/micro climatic and edaphic factors, the plant material used, and your own establishment and management practices.

The polyculture profiles are presented in the following way:

Compatible Climate(KCC) – Indicates the climate zones that are suitable for growing the polyculture. Based on the Köppen Climate Classification system to indicate the climatic compatibility. In areas at higher latitudes be aware that your light levels will be lower so your canopy density should be thinner. i.e wider spacing, fewer plants. Microclimatic conditions should be well considered when assessing the compatibility of the polyculture for a site.

USDA Hardiness – Indicates the hardiness zone that the polyculture can be grown in. I have used the hardiness of the least hardy plant in the polyculture for the lower limit and often this is just one plant. For growers in colder areas, this plant (or plants) can be replaced with a hardier species that more or less match the role the plant serves so do not rule out trying a polyculture based on this information alone. You can find the individual hardiness of each plant in the species list table further on in the profile. more on plant hardiness here.

Water Needs – Indicates the general water/irrigation requirements of the polyculture

Light Preferences – Indicates the general light preferences of the polyculture

Soil Preferences – Indicates the preferred soil conditions of the polyculture. The plant combinations and spacing I am using are generally based on working in a soil that is in optimal or near-optimal condition to start with as we always prepare poorer soils in advance of planting. On soils that are in moderately good condition (anything scoring over 40 on the soil health test) I’m confident these planting schemes will work.

Overview Image – An illustration of the design. This image often depicts the polyculture in the early stages of development and will include the broad dimensions of the design area and labeled positions of the species and features

Functional Components – Summarizes the potential functionality of the polyculture in the following areas:

Species List – A table listing all of the plant species used within the polyculture, and how many of each species is required (per unit depicted), the botanic and common name, the family, USDA hardiness zone, forest garden layer, and function

Maturation Phases – An illustration of the polyculture design when initially planted and when mature. Sometimes other intervals of the growth development stages are included here

Planting – A diagram of the planting layout indicating distances between plants and planting location within the planting zone. For some polycultures, you will also find suggestions for layout variations in this section

A word on the flowering and fruiting times on the calendars. During long cold winters in locations at high altitudes or regions of high latitudes, plants will not follow the sequence as indicated on our calendars. In our gardens at approx. 580 m above sea level on the 42nd parallel north, the calendars are an accurate representation, although there is a lot of variation within the month each year.

All establishment and maintenance information provided is based on using starter plant material i.e, rhizomes and cuttings and 1st or 2nd-year-old saplings. If you are using mature plants or older plants you need to account for differences i.e, fewer plants may be needed, more irrigation and fertility provided to support older/larger plants, and possibly staking and supports if very large plants are used. I always recommend using starter material as it will very often outperform larger plants in the long run, requires less input and attention to establish, and is significantly more cost-effective especially when planting at scale.

Aside from the essential maintenance for some of the amenity plantings and more ornamental polycultures, the level of maintenance required will always depend on the level of tidiness preferred. Generally speaking the less tidy you are the more attractive to wildlife your polycultures will be but there is merit in keeping some areas tidy, namely providing plenty of space for air circulation, allowing more even light distribution within the plant layers, and checking plants that may dominate an area thereby reducing biodiversity. It is much easier for the majority of people to connect with a garden that shows at least some order. Having beautiful, as well as productive and biodiversity-enhancing polycultures, is an important factor when recruiting and inspiring new growers.

Intro – Plutus is a three-species perennial vegetable polyculture of Asparagus officinalis – Asparagus ,Allium tuberosum  – Garlic Chives  and Fragaria x ananassa – Strawberry that we have been growing in our market garden (Aponia). 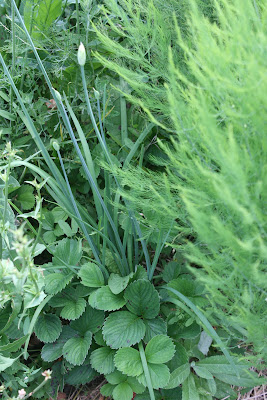 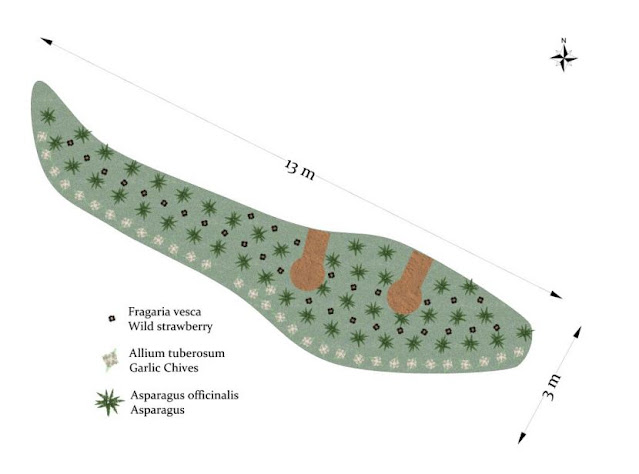 Aerial photo of our market garden (Aponia) with overlay. Plutus is located in the area circled red 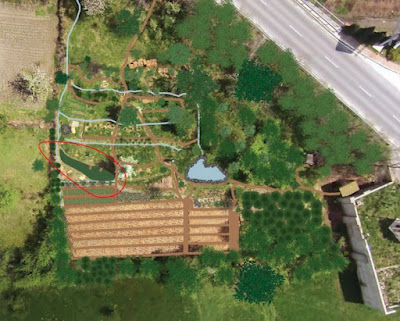 The Asparagus can be considered the canopy in this design with Strawberry forming a ground cover to prevent weeds and the Garlic Chives planted on the south edge to take advantage of available light.

Production Potential – Asparagus can be harvested from April through to June and Garlic Chives can be cut from April-August. Garlic Chives are quite happy in dappled shade but by mid-summer the Asparagus plants can get very tall and the leaves tend to drape over the Chives. The Asparagus row that runs parallel to the chives can be contained with wires to avoid them smothering the Garlic Chives. The Strawberry ground cover will provide a small harvest of berries but nothing substantial, their main purpose being to provide ground cover. Strawberry leaves are rich in iron and vitamin C and can be harvested for teas and salads. 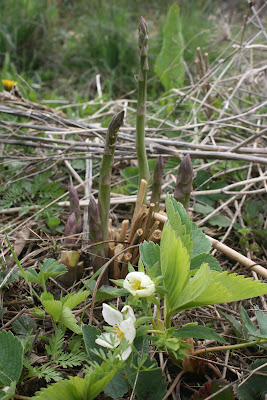 Habitat Potential – When left to flower Garlic Chives are extremely attractive to a range of Borgs, furthermore, the biomass cut from the Asparagus in winter and piled onto the beds as mulch provides suitable cover for many insects and spiders. We keep the bed area free from volunteer plants but encourage native growth in the pathways and alongside the edge of the beds. This wild growth provides a range of habitats for wildlife both above and below ground. 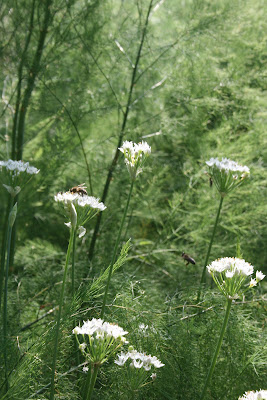 The polyculture is situated on a raised bed with pathways surrounding it and two keyhole paths to access the wider section of the bed. The pathways double up as irrigation channels that we flood during the dry season to irrigate the crops.

Plutus just after planting – Volunteer growth on the edge of the bed can be cut throughout the growing season providing mulch for the beds. We generally leave the wild growth untouched from Oct – March each year. 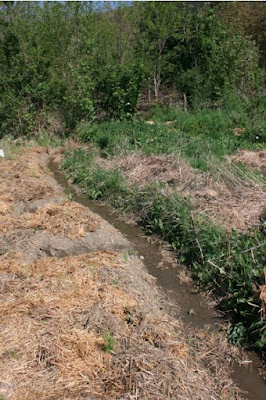 Plutus in the second year after planting out – Summer 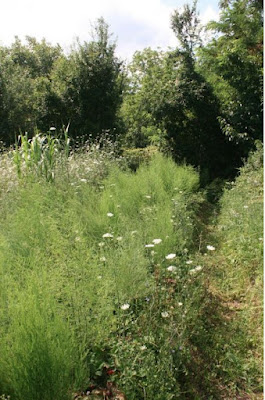 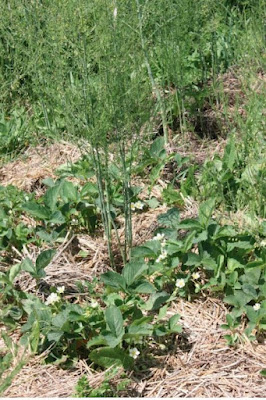 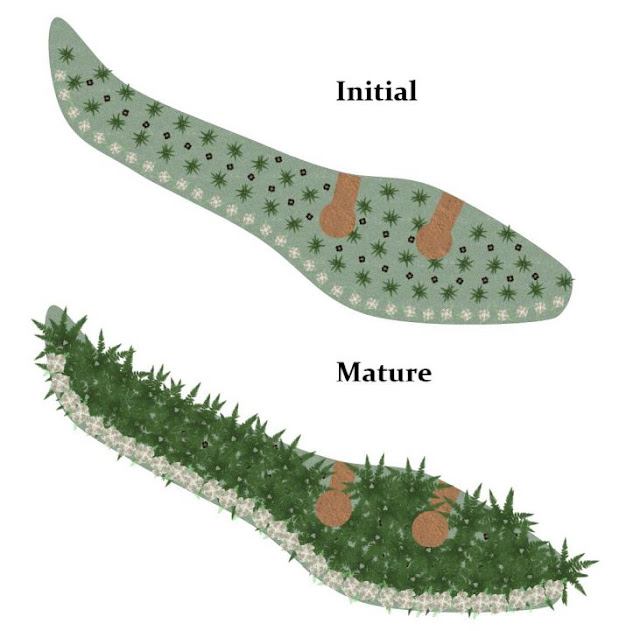 Example of planting distance between rows and plants 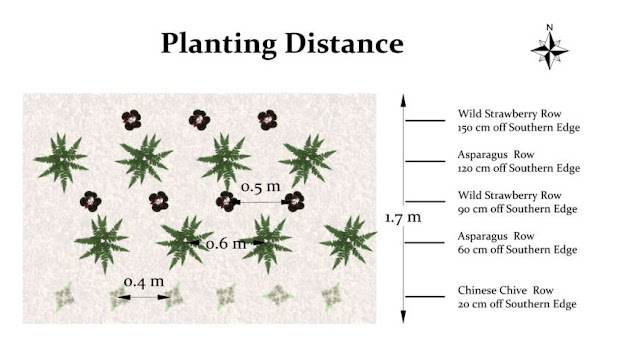