This week has been all about leaves. Autumn leaves provide a valuable source of organic matter that can be used in our landscapes in many ways.  The ESC volunteers have been helping the Mayor to clear the leaves from the streets and taking some of them back to the crew house garden where they are being used to build the soil. We’re going to look at three different ways to use leaves in the garden to help create healthier soils. But first, let’s look briefly at the science behind the colours of autumn.

Leaves get their green colour from their photosynthetic cells, chloroplasts, that contain light-absorbing pigments. These pigments respond to different wavelengths of light. You are probably familiar with the main pigment used to help plants photosynthesize –  Chlorophyll – but Chlorophyll is also assisted by the pigments Carotene and Xanthophyll. Carotene is responsible for the orange colour of the carrot while  ‘Xantho’ is Greek for yellow. These two pigments are always present in leaves, unlike Chlorophyll which stops being produced in a response to the shortening days. It’s commonly thought that leaves get their green colour in the growing season due to Chlorophyll reflecting green light, but regardless of where the actual reflective action goes on, it is clear that with Chlorophyll not being produced, the orange and yellow pigments of the Carotine and Xanthophyll become visible. The red hues that we see come from pigments called anthocyanins, which actually not all trees produce. There are many theories as to the role of  anthocyanins, the most widely accepted being that they protect the leaves from excess sunlight and help the trees to recover any last remaining nutrients before shutting down. In addition to the processes described above, trees also form a separation layer of cells at the bottom of each leaf to seal it from the tree. Once the layer is complete the leaf falls. This entire process is known as senescence and can be seen as a coded or programmed shut down before the death of the actual cell.

It’s not essential for a grower to understand plant physiology and the scientific basis of how everything is working but it does also seem an inevitability. The book that we recommend delivered this knowledge in a way that only someone who has dedicated their life to trying to understand the complexity of plants and plant care can  – the brilliant Botany for Gardeners by Brian Capon. 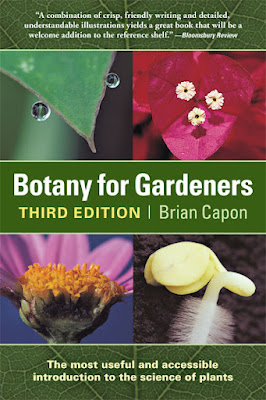 We’re now going to look at 3 ways in which you can use leaves to create healthier soils. In each of the examples it is advisable to gather the leaves soon after they fall. This is in part because leaves contain Lignin, an important component of a plant cell wall which among other things enhances rigidity. This function can slow down decomposition and as the leaf falls from the tree or shrub, it often further dehydrates and toughens, reducing its ability to transmit nutrients into the soil as readily. If you gather the leaves and store them together, keeping them reasonably moist they will become hydrated and break down more quickly.

Autumn leaves are generally considered as a carbon rich material but most will still contain some nitrogen. It can take a year or sometimes more for leaf mould to have fully decomposed but it will then become a valuable addition to your soil.  It has excellent drainage and water holding capabilities and may be dug into the soil, applied as mulch in its semi-decomposed state and may also be used to create a potting mix. We have never tried this as we generally use sieved compost and river sand at a ratio of 1:1, but see no reason as to why leaf mould would not make an excellent alternative if your compost supply is thin on the ground. Simply gather the leaves using a rake and pile them into a designated compost station, preferably one with with open sides and top, allowing the air into the leaf pile. If it’s dry you can add some water.

If you have access to a lawn mower that can collect the trimmings, it’s an excellent idea to mow over any autumn leaves on a lawn as this shreds the leaves which helps them to decompose more quickly and also adds a proportion of nitrogen to the carbon rich leaves. A word (or perhaps a few hundred) here on carbon to nitrogen ratios: although many elements are required for microbial decomposition, carbon and nitrogen are the most important and are the basics on which we build our compost heaps. The ideal carbon to nitrogen ratio is generally accepted to be around 30:1 by weight. This encourages the best performance of the composting microbes that require carbon for energy and nitrogen for protein production. It’s easy to become somewhat fixated on this ratio, but we have found over the years of building compost piles that keeping it simple and piling lots of carbon rich and some nitrogen rich organic materials in alternate layers works very well, especially if the dry materials are soaked, and the pile is kept light and fluffy during the build for good air circulation. 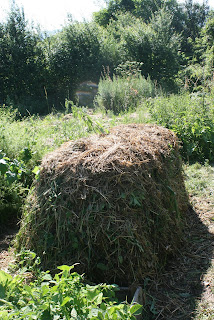 In the above compost pile we mainly used grass clippings, straw and cow manure, but the more diverse your supply of organic matter a more diverse range of microbes should populate your pile resulting in a higher quality compost. If you are adding autumn leaves to your compost pile you may simply treat them as a layer of carbon rich materials, although it should be considered all of the materials we compost have both elements within them, just to a higher or lesser degree or ratio.

Autumn leaves may be applied to all areas of the garden – directly onto productive beds or under trees or shrubs. It’s fine to pile them up to around 50cm in height as the leaves will lose height with the rains and as the seasons progress. If you want to avoid the leaves being blown out of position in strong winds, you can soak them after laying them in position. Leaf mulch has insulating properties which can be very useful when applied to an Asparagus bed, for example, or an area where autumn planted crops such as garlic is growing, as it will create a micro-climate and reduce the chance of the soil freezing.
Although leaf mulch can increase the acidity of soil, it shouldn’t be a problem adding it to productive beds, especially if, like us, you add wood ash during the winter and other organic matter during the spring. Pine needles also have the potential to lower the soil pH, but in small quantities shouldn’t cause major issues. If you have a larger amount you can always collect them separately and reserve for acid-loving plants such as Blueberries. 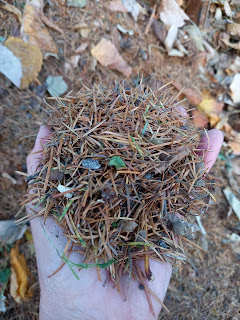 We always leave a certain amount of leaves where they have fallen to feed the trees and also sprinkle some on the more formal grassed areas, supplying nutrients to the lawn. It’s also good to remember the old tried and tested ways – gather leaves into a huge pile and jump or fall into them, as demonstrated here by ESC volunteers Fanny and Markus :) To read the ESC crew’s personal blog see here.