Facing the encroaching winter and water-damage to all of the 100-year-old lumber we’d painstakingly repurposed, we had to improvise.  We called the building inspector and asked for a bit of grace with our inspection if we installed a propane heater—meant to eventually be our back-up heat source—for now. To his credit, he agreed to allow us to move-in as long as we could install the cookstove within an arbitrary 45 days of passing inspection. So, we bought a vent-free, wall-mounted propane heater that was UL-listed and powerful enough to warm our space. It arrived promptly and seemed to solve all our woes. We’d be in the house before December.

When the first gas company (that’s right, “first” again) refused to set up the heater because vent-free heaters aren’t allowed to be in the same room as beds and, our house being one large room, disqualified us, we may have panicked a little. When the second and third gas companies didn’t mention our disqualification, we learned that—winter being right around the corner and all, business booming this time of year—it would be at least a couple of weeks before they could set up our propane tank. We had to improvise again.

The solution it turned out was borrowing my boss’s (a wonderful man, to be sure) old propane heater that affixes to a portable propane bottle. And, on December 1, when temperatures dropped several degrees below freezing, that’s how we kept the house warm enough to stay in it overnight, the door cracked to keep fresh air circulating into the room. We kept the solar components warm enough to continue functioning properly (or, at least, seemingly so). With that success and little more, no bed or wood-burning cookstove or operational shower-head installed or final inspection, we just stayed in our cabin. We cordoned off a little corner, slept on tent-style sleeping mats, and kept on building.

The permanent gas set up happened a couple of days later, and the vent-free heater worked great, even with us continuing to crack the door a little to be extra safe when it was on. It took buying two shower-heads and several adaptors to make our secondhand cast-iron clawfoot tub have a shower option—we did have a few baths—but now it does. And, it kind of works. We have a propane stovetop that sits in our unfinished mudroom (it has to be outside for the same reason vent-free heaters shouldn’t be in bedrooms) which, for now, we’ve crudely closed in with repurposed plastic from our insulation shipments. That’s our kitchen.

We’ve been living here for two months, though we can’t officially do so. Nevertheless, we’ve built a mailbox out of some cedar boards and shakes that I acquired from scrap piles at work, and lo and behold, packages arrive. We got a mattress as a Christmas present to ourselves. We put in some flooring around that empty hearth and built a kitchen table, a coffee table, counters, a bed, and shelving. Though we don’t run the heater a lot the house stays toasty, a sign we did something right, and the place grows more comfortable by the week.

Years of theoretical homes and designs have come to this point in time. Nothing is completed. We’ve been building this place for about 18 months, but by law, our home isn’t even allowed to be our home just yet. Sleepless nights over solar and well pumps and errant shipments are part and parcel to a new reality. The problem-solution essay writing I used to teach students at the community college has become a tangible way of living. But, we have home. And, there’s a garden waiting for spring to break. Everything works out, and works, kind of.

Coming down the mountain we are both lost in thoughts and disappointed to find the sky quickly goes back to grey. It’s mid-afternoon, and it’s been a long day already. Though we are pleased to know how to fix the issue with our electricity, with no service centre calls necessary, there is the palpable reality that this is our life from now on. With no landlord to call when the power goes out, with no water company to pump our water in, the onus is on us to keep it all going. That’s before and after and during all the gardening that kickstarted this off-grid homesteading dream.

As we reach the valley below and turn on the road heading home, the sun is doing its best to fight through the cloud cover. Patches of blue are appearing, and it’s looking like we’ll get an hour or two of at least broken sun if not high-quality rays. We get the battery hooked back up in less than five minutes, and by sun fall, it has a healthy charge. In the morning, with the battery power reduced significantly, we shut off the electricity running to the house and use the generator for Emma’s classes.

While the solar power hasn’t stayed afloat as long as we might have hoped, the generator has served as a reliable back-up, as planned in our home design, and Emma has managed to keep her job. The forecast promised sun again, and that proves out by about 9:30 when the battery starts to fill, this time without ever going into protection mode. It seems we’ve learned a few new steps in the solar power salsa, something to keep the music going without driving up to steal a 48-volt charge every time the weather disagrees with us for a day or three.

A couple of weeks back, we finally got an email announcing the stove would be on its way. Though it was mistakenly shipped to Illinois before reaching our home in North Carolina, it did make it. And, that neighbour with the tractor helped us unload it, and it turned out that he was a master of moving heavy appliances. He cycled a collection of pipes, rotating the ones from the back to front so they worked like rollers, while Emma and I pushed the stove right to its final resting place.

The double-walled chimney had been sent ahead of the first stove in September, and the stack of boxes had been moved around the house—much like the solar components had been—multiple times to accommodate the ongoing construction. Even so, it took us nearly a week to brave the chimney installation. We had a couple of nights of sub-freezing temperatures, and the idea of cutting a hole in the wall, let alone getting caught with said hole, seemed a worthy deterrent. But, we knew there was more work to be done. The stove was here, but it wasn’t operating just yet.

When Friday morning was sunny and bright, we ran the chimney from the stove through the wall before dusk sent us back inside. Saturday morning we cut through the roof overhang and sent the pipe up, finishing in early afternoon, just as the sun ducked behind a thick carpet of clouds. The forecast showed up to six inches of snow in the next 24-hours. Just before I climbed off the roof, I asked Emma to take a photo of me with the chimney. I wanted to cry. We’d been nervously waiting to move that stove in and install that chimney for five months. That’s a long time to be nervous about something. 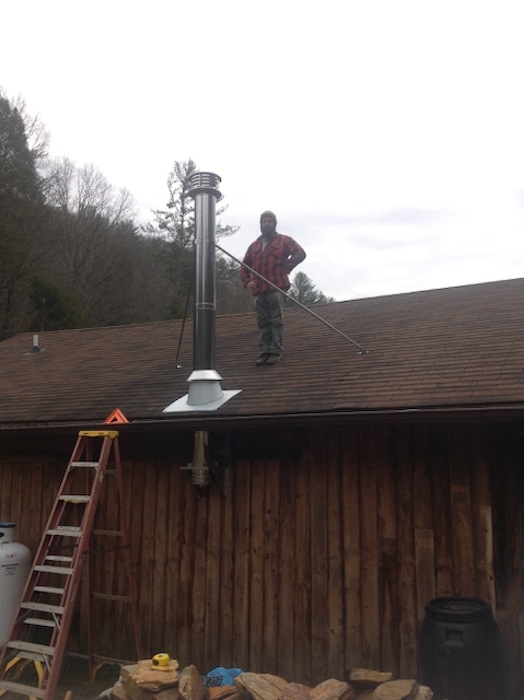 Funny thing is we go inside, crack open a couple of celebratory beers and peanuts, and just sit in front of the cookstove without building a fire. It was as if we couldn’t yet quite bear the reality of another responsibility. We’ll get there soon enough. It’s where we want to go. Sometimes you just need a break.