It’s been much cooler weather this week with a daytime temperature falling from 32°c one day to 12°c the next! The cooler spell has brought with it rain, that the gardens seem to be appreciating and is slowing down the pace of growth. A welcome pause.

So here’s what we’ve been up to in the gardens this week.

The cherry trees are lovely and ripe now although we’ve been eating them for the last week and should have another 5 or 6 days before they fully ripen. The photos below show cherries picked from the same tree, the photo on the left picked 7 days before the photo on the right. I’ll get a photo next week for comparison, but it’s definitely worth the wait for those darker fruits. 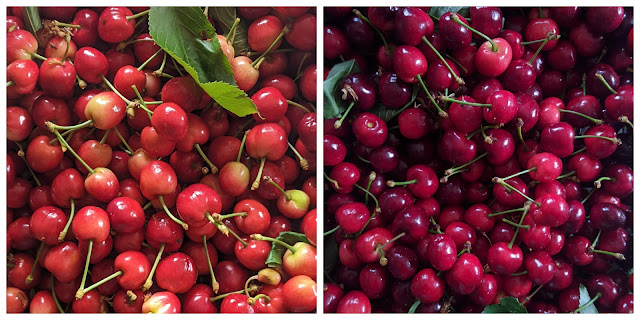 Lunaria annus – Perennial Honesty, seeds developing in the pods. It’s a great self-seeding annual and is spreading around our perennial beds attracting a lot of interest from bees and butterflies when in flower. All parts of the plants are edible. The leaves can be used as a green vegetable or in salads before the flowers appear, the flowers can be added to salads,  the seeds can be used to make a mustard substitute and the root can be peeled and eaten. 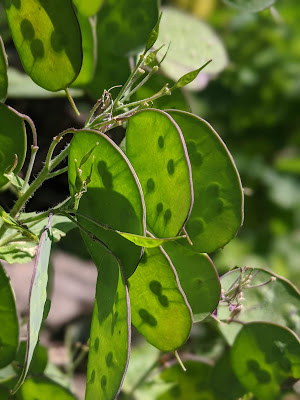 One of our early potato plants has started to flower, which can be considered as a signal to start mounding up the potato plant as it signals the stems are mature enough and have enough leaf mass to start forming tubers. 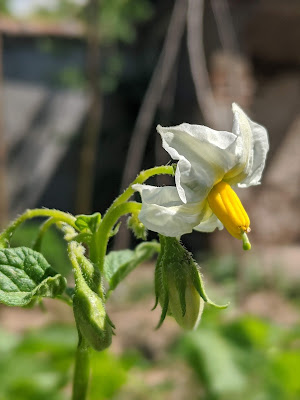 This year, we are experimenting with using wet straw in our potato beds instead of using traditional mounding up methods.  We collect spoiled straw bales from a local farmer who can’t use the straw for animal bedding but they are ideal for mulch. We store them outside until needed and as they are outside without cover, the bales get wet in places which makes them ideal mulch to apply to the potato beds, as the straw has some weight to it when wet. We’ll see how well this method works when it’s time to harvest them in late June/early July. 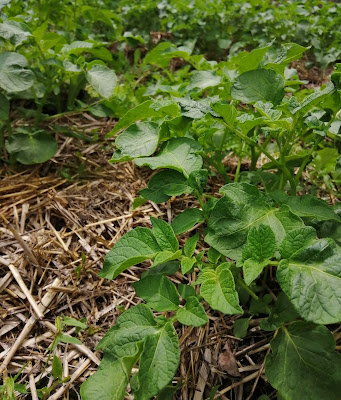 ​Prunus nipponica – Japanese Alpine Cherry fruits. As the name suggests this plant originated in Japan often found on mountainsides. A deciduous small tree or shrub with beautiful serrated green leaves, it makes a popular choice in the garden as an ornamental tree. Its pale pink flowers in early spring give way to unusual red husks that stay on the tree for a considerable time after the blooms have finished.. It is one of the hardiest cherry trees and helpfully suits a variety of soils. This “Brilliant” variety is a compact, bushy tree attracting many useful pollinators to the garden. 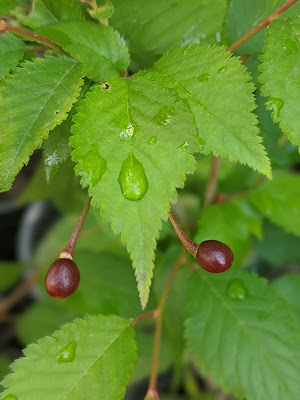 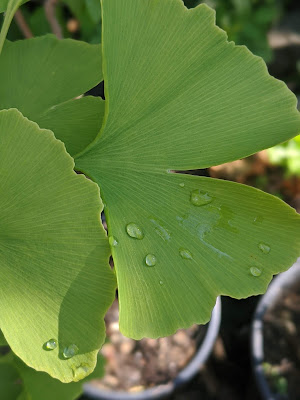 I found this Ichneumon wasp in the sunroom, a great pest predator.  Although that ovipositor looks alarming, they cannot deliver a sting as many wasps or bees do. Interestingly, it’s used to lay eggs. Some ichneumonid species lay their eggs in the ground, but most inject them either directly into their host’s body or on its surface. After hatching, the ichneumonid larva consumes its still-living host from inside out saving the vital organs until the end to keep its  meal fresh. The most common hosts are larvae of Lepidoptera, Coleoptera and Hymenoptera and include some common garden pests. 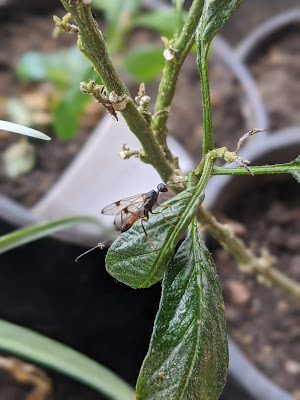 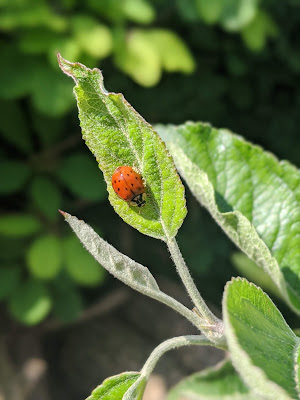 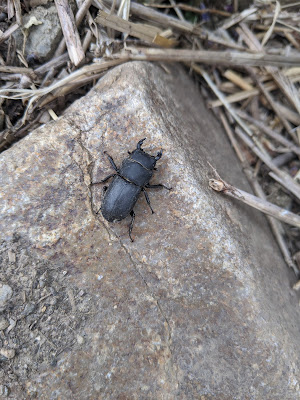 Now that we’re moving towards the summer,  our ducks are completely free-ranging and are not locked up at night, but sleep close to the pond.  Foxes are relatively rare in the village and tend only to be a problem in the other 3 seasons (I hope not to be proved wrong in this case!). Our main predators are the European Polecats – Mustela putorius or the European Pine Marten – Martes martes.  These fascinating but deadly creatures usually come out at dusk or dawn, and we’ve lost many a flock of chickens to their predation.  They tend to kill the bird by biting the neck, drinking the blood and sometimes leaving the corpse behind. They are part of a diverse family, the Mustalids, carnivorous mammals that include ferrets and weasels. 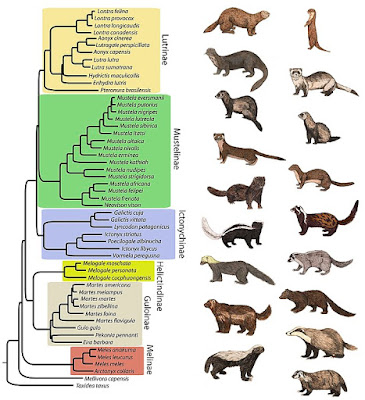 It seems the early spring and late autumn are the danger times, and the later is when we start locking the ducks up again. Free to lay wherever they choose, it’s like an Easter egg hunt every day trying to locate the latest nesting spot.  We’re hoping that one of our three females might go broody and sit on a clutch of eggs, but so far they haven’t shown any interest. 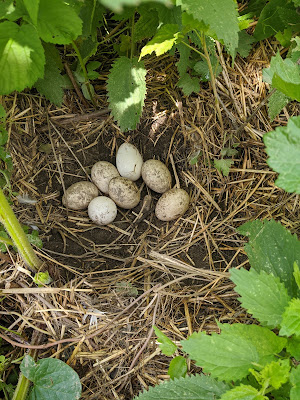 Sambucus nigra  – Elderberry in full flower, the clusters of white flowers attract a lot of interest and are pollinated by a wide variety of insects, especially hoverflies. We dry flowers for tea and have made Elderberry flower syrup in the past  The berries provide an important food source for garden birds such as blackbirds and thrushes, as well as being used widely in the kitchen and for medicinal purposes.   We’ve also started growing  the purple-leaved cultivar Sambucus nigra ‘ Black Beauty’ – Elderberry 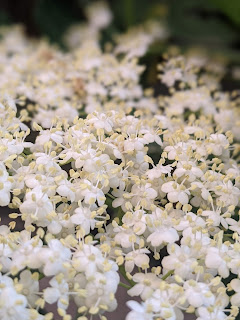 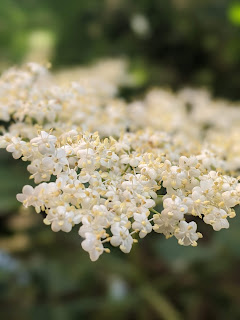 Ficus carica cv. – Fig and Convallaria majalis – Lily of The Valley growing under our Elderberries. The Elderflower Snow effect :) 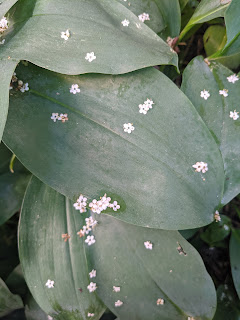 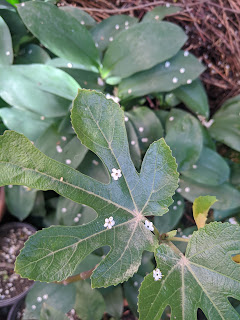