It’s certainly feeling like mid summer around here, the temperature has increased, the rains have paused and there are more fruits than you can shake a fruit laden stick at. This week we started a series of observational surveys and tests looking at habitat, garden wildlife (specifically invertebrates) and soil health.

So here’s what we’ve been up to in more detail.

Our project mission is to develop and promote practices that can produce food while enhancing biodiversity. In order to encourage biodiversity in our gardens we include a variety of habitat into the landscape design, some wild (at various stages of succession) and some cultivated. The gardens are, essentially, a mosaic of habitat.

The map below shows the various habitat types within our 8 year old Market Garden, Aponia. (Aquatic habitat not labelled). I’ll be writing a detailed report of these habitat types at a later date including the typical flora and fauna species, how to develop, maintain and manage them, and what is the productive potential of each habitat. For now we wanted to take a closer look at the biodiversity value that each of these habitats provide, specifically to see how they compare with each other and how our cultivated habitat types i.e annual and perennial polyculture, compare to the wild habitat types. This week we devised some simple invertebrate surveys within the habitat types using pitfall traps and canopy observations to measure the number of unique species found in each habitat. The habitats we surveyed included:

This will be a 3 year study with the surveys carried out at the same time every Monday and Tuesday  for a 3 week period in the months of August and April.  Weather conditions – Cloud Cover, Temperature, Wind – are recorded with each survey. 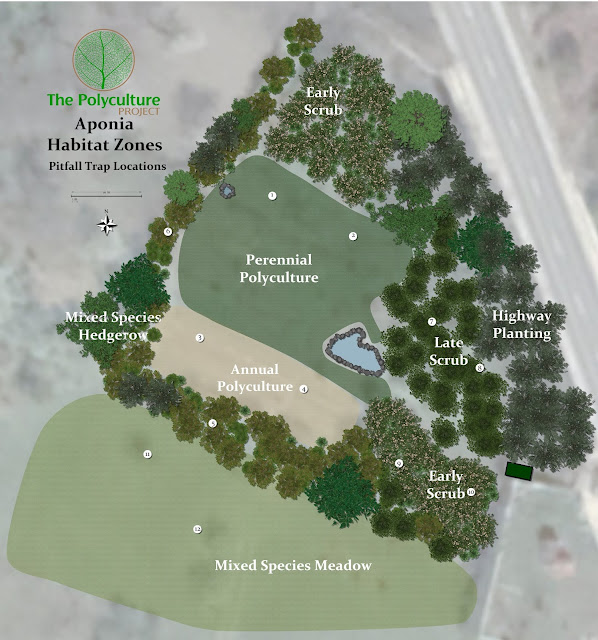 Shahara made some great videos that show the habitat types and how we undertake the pitfall traps surveys.  Here’s part one

You can find more of Shahara Khaleque’s videos on her project facebook page GrowingSmart.HK. Thank you Shahara :)

50m trails within each habitat are determined as shown by red dotted lines in the below image. 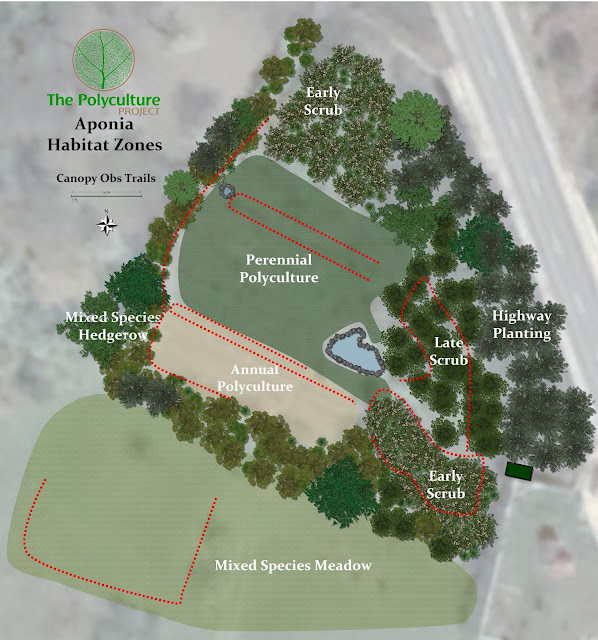 There are 10 observation locations in each trail spaced 5m apart from each other.  At each location the observer stands and observes for 2 minutes within their field of vision (without moving head) and  counts and records the number of unique species they can see on the plant vegetation and on the ground. Species you have seen in previous locations are counted again. i.e. you start a new species-count after every change of location and an average of the number of unique species seen on the trail is recorded. Unique species = do not count individuals, count visibly different species, e.g.
3 black ants and 1 red ant = 2 species
1 big black spider and 1 small black spider, hard to say if it is young/old or male/female = 2 species
1 small spider and 1 big spider that are clearly the same species = 1 species
Flying species: Bypassing flying insects do not count. Insects hovering (to feed on nectar/pollen) or landing in your field of vision do count.
The canopy observation is then repeated by a different observer for each habitat and an average is taken of the two surveys for the final unique species count for each habitat.
Thank you Simon and Eva for writing the protocol for the canopy observation survey and with your help and feedback on the survey design.  Here are Philip and Shahara taking canopy observations in the Mixed Species Meadow and Early Scrub habitat types. 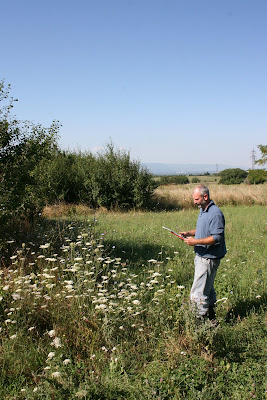 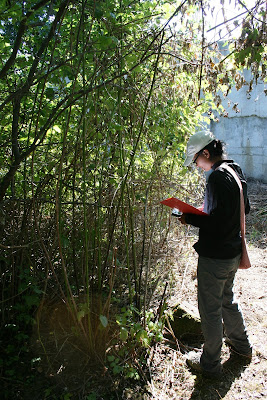 For what it is worth, here are the results from last weeks surveys . I’m looking forward to getting more data in the future and hope, at least, to gain a glimpse of how invertebrate diversity compares within these habitats. 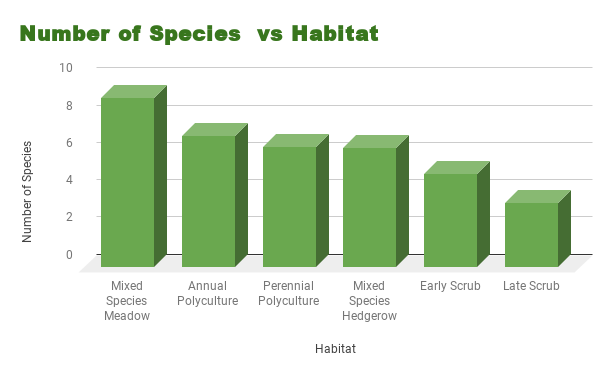 Shortcomings of the Surveys

We’d like to keep the surveys  as simple and replicable as possible without sacrificing the validity of the data. We’ve identified the following shortcomings so far.

If you have any suggestions on how we can improve the survey please do let us know and if you would like to try the survey yourself, send me an email and I’ll send you the record sheets and protocols.

About four years ago we planted out an experiment called the “biomass belt”, a support polyculture composed of biomass plants, Comfrey ‘Bocking 14’, in raised beds, Nitrogen fixing ground cover sown into pathways and a Nitrogen fixing hedgerow. The purpose of the polyculture is to grow mulch and fertiliser for annual and perennial crops around the garden. You can read more about this polyculture in detail here.
Here are some photos taken last week of the biomass belt. 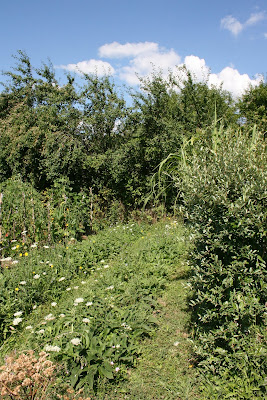 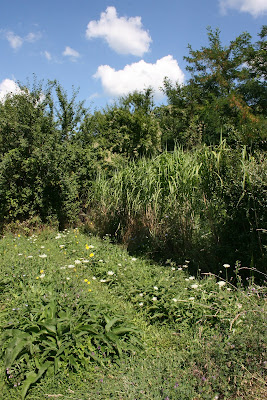 The belt is growing well, although not all of the original hedgerow species have survived, we added Miscanthus x giganteus – Giant Miscanthus into the hedgerow to fill the gaps. Elaeagnus umbellata – Autumn Olive has grown well as a hedge plant and is fruiting this year (even after trimming in the spring).  The Symphytum x uplandicum – Comfrey ‘Bocking 14’​ beds have done well and you can find some details of how much biomass we harvested from these beds here. I’m really pleased with the Trifolium repens – White Clover pathways.

Here is the original layout and planting scheme…

….and here an illustration of how the Biomass Belt functions – Thanks Georgi Pavlov for the illustration. 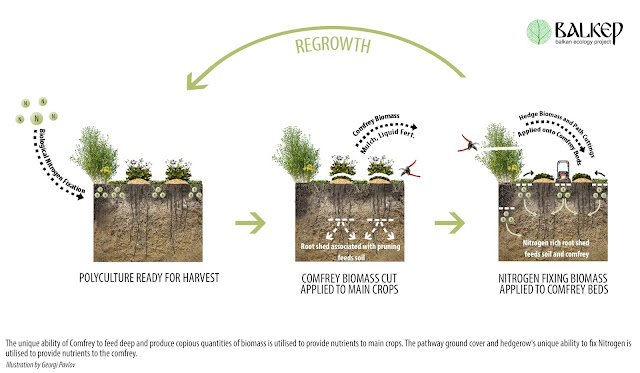 Climbing Beans, Cucumbers and Melothria scabra – Cucamelon. The Beans and cucamelon are doing great but I’ve rarely had great results with cucumbers. They always seem to be misshapen, small with bitter skin, although tasty enough when peeled. 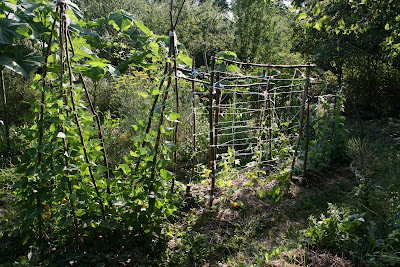 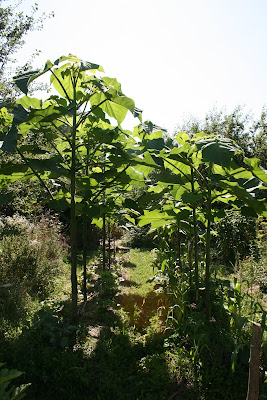 The fallow patches in the market garden are in full flower now attracting an abundance of insects. Viper’s-bugloss – Echium vulgare is a great wildlife plants and its deep roots (down to 70 cm) probably serve well as a mineral repositor fixing nutrients that would otherwise wash through the soil into biomass. 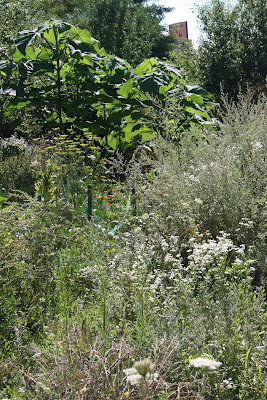 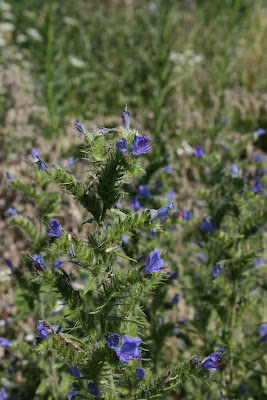 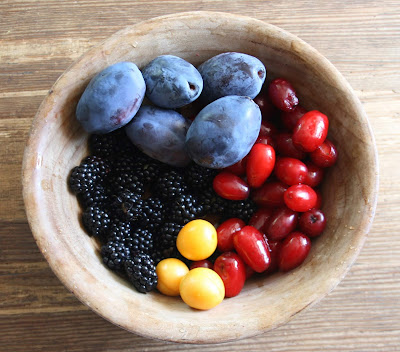 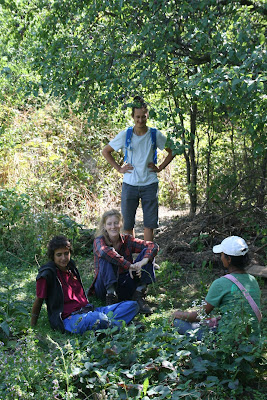 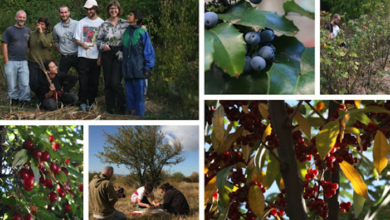 Starting a New Garden, Propagating Currants, Forest Garden Fruits and the Last Week of the Project 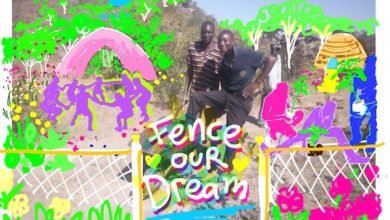 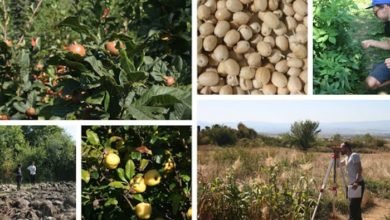 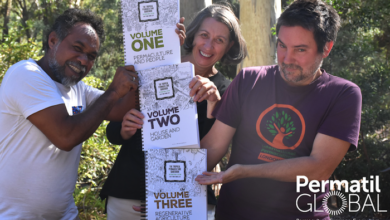 New foundation set to grow permaculture across the globe 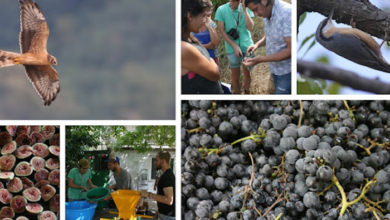 Juicing Grapes, Birds in and Around the Gardens and Moth Trapping 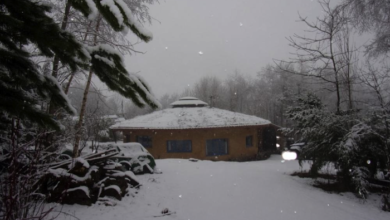 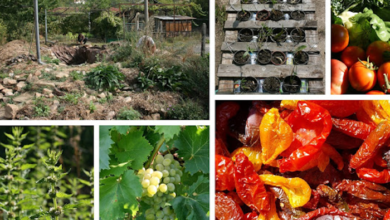 Preserving and Processing, Aquatic Habitat Island for our Rainwater Reservoir and Garden Biodiversity 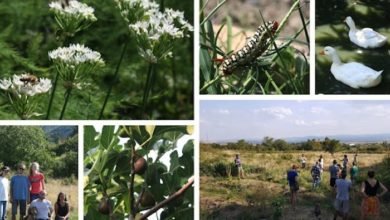