Emma and I have been in the process of becoming homesteaders for several years now. Most of that time was spent learning crafts like building, gardening, and designing, as well as looking for the right property. But, over the last year or more, we’ve moved on to the stage of applying these skills to reality, an actual piece of land and a home (in progress).

The hardest pill to swallow in this new phase has been bridging the things we’ve learned in permaculture courses (and the like) with the reality of putting them into practice. For example, we’d been wanting a sustainable, natural home, but building codes in the US don’t just let you do that. In fact, they are more or less pitted against it and, for that matter, a person building their own home at all, by code or not. Nowhere in our courses did we cover how to actually deal with these challenges, other than to acknowledge we were likely to encounter them.

Some of the sustainable measures we’d like to take, such as composting toilets and a wood (cook)stove hot water heater, we’ve designed as retrofits to our cabin, to be installed once we’ve passed building inspection. Others we are still figuring out. That’s where biodigesters come in. We’d love to give it a go, but the reality is that we’ve come to assume inspectors wouldn’t be big fans. Moreover, we still have a lot of questions about just how beneficial biodigesters are in terms of a fuel source.

The Short and Simple on Biodigesters

The concept of a biodigester is easy to understand, and though we’ve never built one, it seems the construction is rudimentary as well. Basically, a biodigester is a large container in which anaerobic (deprived of oxygen) decomposition takes place. This is done by promoting certain naturally occurring microbes to perform their biological functions of breaking down organic waste by providing them an oxygen-free space in which to do it, i.e underwater. As anaerobic decomposition takes place, biogas—mostly methane with some carbon dioxide and small amounts of other gases—is released. That mixture of gases can be captured and used for fuel, similar to but not the same as propane or butane.

There are loads of simplistic designs on the internet, specifically from Solar CITIES, for varying scales of biodigesters. After some research, we’ve narrowed our situation down to the recycled IBC tote design or, less likely, the all-in-one-kit offered by companies like HomeBiogas. While information on these DIY biodigesters is abundant (and free) online, it’s been difficult to fully understand the realities of using one. It’s as if the information emphasises the fact that biogas production is possible. Of that, we have little doubt. But, of course, there are a lot of other relevant details. This has become the issue with so many sustainable measures.

The question remains as to how much biogas are we going to get from this thing. Some estimates put the daily at a couple of hours for a single burner, but honest reviews quote much lower. There seems to be little consensus or stability. Because we cook every meal at home from scratch, even with just the two of us, it seems problematic to rely on maybe just half an hour of cooking fuel a day. That’s just not enough to do all the cooking we do.

The Voice of Experience

In other words, whether true or not, the information we could gather wasn’t supplying us with what we wanted to hear. We were hoping for a reliable cooking fuel to cover all our needs and supply fertiliser as the digital brochures and YouTube videos seem to suggest. But, that’s not the reality. Not even close.

Luckily, I’ve recently been exchanging emails with Nic Donati from Rancho Mastatal, a sustainability education center in Costa Rica, and they’ve got two biodigesters on site, both of which have been in operation for nine years. So, I tapped him for some information. The site’s digesters are both run exclusively on water and faeces, one on humanure and the other on cow patties.

The digester for human excrement is fed directly by two toilets. It has a brick digestion chamber roughly 2 meters deep and 1.5 meters across with 1.2 meters spanning the inside cavity. There are separate outer and inner walls with a gap of about 15 cm between them. The gap is filled with water, and atop that water floats a fiberglass dome that rises as the inner chamber produces biogas, filling it, and sinks as people use that gas, depleting it. It was sized to function with the average number of people there (and pooping in it) throughout the year: 20.

The digester for cow manure works differently. It involves a series of tanks (55-gallon barrels) that help to filter out solids before manure effluent enters a PVC bag that captures the biogas. The bag can hold 900 gallons of water, and it is given 30 gallons of manure effluent a day. The solids are put into a vermicompost before being used for the vegetable garden, and the manure effluent passively fertilizes tree crops. All the while, the anaerobic decomposition of the effluent is offing biogas.

Together, these two systems supply gas for the Rancho Mastatal kitchen, which accounts for about 50 breakfasts (eggs and gallo pinto) each morning prepared on biogas alone. Nic says that generally the gas gives out somewhere into lunch, at which time the cook switches over to a fuel-efficient, wood-burning stove. By the next morning, the biogas has replenished. The kitchen is roughly 30 meters away, and the system uses gravity to create enough pressure to use the gas for cooking. Ultimately, the gas comes through a specially designed stove that equates to a ½” (1.27cm) metal pipe with a ball valve. As we already know, biogas requires a different, more free-flowing stove design than what is used with pressurised tanks of propane.

While interesting and enlightening, in truth, the biodigesters at Rancho Mastatal won’t work for us.  For one, local codes would likely not allow us to use the biogas toilet system, though sewage treatment plants do use similar large-scale systems and there is plenty of information for using a home septic tank to create a biodigester. This, of course, would be better for the environment, which alone would make it worthwhile, but in terms of cooking with gas, our two butts just wouldn’t provide enough effluence. In the case of cow manure, we could probably find some from neighbours with cattle, but we don’t have a reliable source for 30 gallons of effluent a day. Being vegans, animal husbandry won’t be part of our homestead. So, we are left with a different path.

Many biodigester systems do run on kitchen scraps (or claim to), though using some cow manure to inoculate the digester helps. In the case of kitchen scraps (as well as grass clippings and similar nitrogen-rich matter), they must be ground up and added as a slurry rather than straight food scraps. Nic mentioned that they’d tried fruit peelings in their system, but yeast contaminated the fermentation and produced too much carbon dioxide, ruining the biogas.

Thus, we are left with the similar situation: Due to the restraints of environmental and building codes, the reality of practicing this has to be done on the sly, with risk of penalty, and consequently has to be implemented after the fact, a kind of preconceived retrofit to our kitchen. While there is still gobs of experimenting we’ll have to do, at least we do know (and have accepted) that our future biodigester is more likely to provide enough gas for a small fraction of our cooking.

In the winter, with a wood-burning cookstove doubling as a heater and water heater, that’ll be just fine. In the summer…we’ve got some more planning to do.

There Is Only One Place To Begin 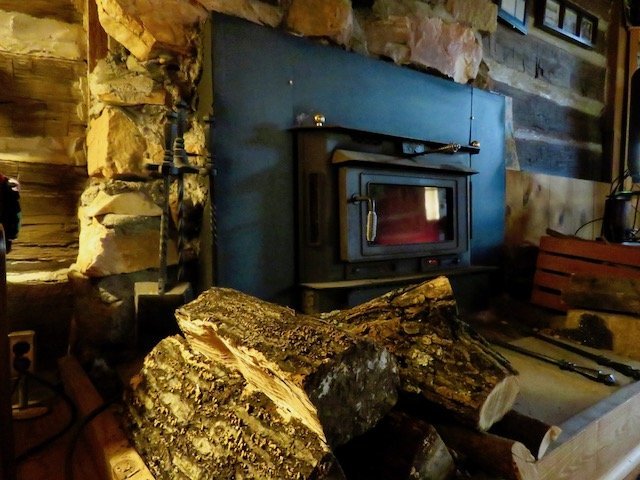