One of my favourite parts, and there are many, about foraging food is that some things can only be grown by nature. Even more amazing is that sometimes they are amongst the most delicious versions—greens or mushrooms or tubers or fruit—of what we can eat. Golden chanterelles are in this category. They are featured regularly on top 10 lists of edible mushrooms, they can only be found in the wild, and I’m currently eating them on a daily basis.

While many choice mushrooms can be cultivated, chanterelles cannot, at least not entirely or commercially. Mushrooms that grow on logs, as we are accustomed to with home production, need to be decomposers. They feed on the wood, breaking it down, and provide mushrooms all the while. But, chanterelles are mycorrhizal, and this means they have to initiate a symbiotic relationship with a living tree. Though we can attempt to spread spores in ideal locations, only the fungi and the tree are in control of this.

The reason I’m so excited about these mushrooms right now is that they are in season again. Emma and I have been picking them regularly for a couple of weeks or more, and we’ve already harvested several kilos from near our cabin. We are lucky to have stands of them in the oak-pine forest growing around us. This year compared to last, which was a great picking season, the forest floor seems littered with them. We’ve been sharing with friends. Now, I want to share the possibility with you. 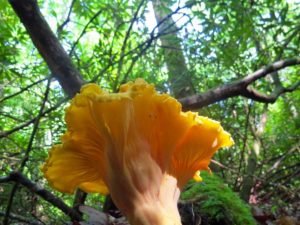 On the global scale, chanterelles pop up, quite literally, in many places. They grow in Europe, Asia, North America, Central America, and Africa. More specifically, they grow exclusively in the woodlands of these regions as they require an interdependent relationship with living trees, and even more specific, rather mature living trees.

Here in North Carolina, they seem to favour oaks, but in the Pacific Northwest, they like Douglas firs and hemlocks. Here, they are a summertime mushroom that thins out by early autumn, but in Oregon, they are more of a fall crop. In other words, it’ll take some research on local conditions to figure out the specifics. The question of when to harvest chanterelles differs depending on where you are foraging.

Beyond that, what we’ve realised is that we find chanterelles where the forest floor is almost exclusively leaf litter. If there is a lot of low-growing greenery, it’s not a good sign. Though not singularly, we’ve also found that they like the sloping banks of forest streams and tend to trickle down these banks. And, it’s important to know that chanterelles will be growing out of the soil in small groups but not clusters (tied together), often at the base of trees, but not on the wood. 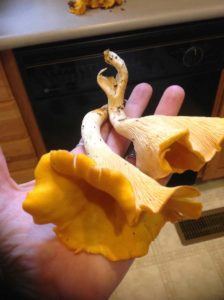 When foraging mushrooms (and plants for that matter), it’s obviously very important to know well what the target looks like, as well as what looks like it. Chanterelles are a great foraging mushroom because they have some features that are unique to them and easy to recognise. Plus, they don’t have a lot of lookalikes.

Firstly, they are several types of chanterelles, some which look very different than the golden chanterelles typically linked to the name. Black trumpets and cinnabars (we are finding these now, too) are also in the chanterelle family and good finds, but they aren’t what I’m writing about here. Golden chanterelles, which I’m using to mean Canterellus cibarius, C. formosus, C. lateritius, and others, are the prize.

Distinguishing features of golden chanterelles include their colour, shape, gills, and stem, or shall we say just about everything.

The main troublesome lookalike for golden chanterelles is a mushroom called the Jack O’ Lantern, which is poisonous but not necessarily lethal. (Even so, it’s not a mistake to make.) Jack O’ Lanterns are a similar size, grow in similar places, and have a similar colour, but the comparison stops there. Jacks grow on wood, in large clumps, have true gills (unforked), and sport bell-like caps. Knowing this, it is actually very difficult to confuse the two. 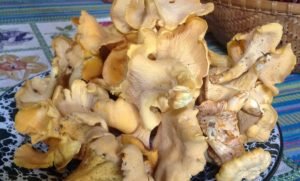 For those who like good, natural food, there is little left to be said for why we should forage chanterelles, but for a moment, let’s reflect on it. Chanterelles are organically produced, nutritious food worthy of being a featured ingredient for upscale dining. They are also completely free when found in the wild and wildly expensive when found in markets (about $20/pound here). Foraging for them gets us out in nature, in the forest, exercising and observing the world around us, things that just add to the health benefits of eating the chanterelles. They are known to be a good source of B-vitamins, iron, copper and vitamin D.

The other part of foraging I like is just how empowering it is. I’ve learned to recognise all sorts of wild things I can eat, a skill that was once common but now largely forgotten in Western cultures. While I love gardening, it’s something altogether different to take a walk in the forest and come out with a basketful of wild mushrooms, something that nature just gifted, for dinner. I’m capable of that now. Emma and I will go camping and sometimes forage 75% of our dinner: fresh, nutrient-dense food.

Lastly, I just want to point out that it’s easier than we tend to think. At first, we were timid and fearful. We’d grown up afraid of wild mushrooms and berries, sure that any and all of them would likely kill us. But, that’s just not the case. Furthermore, there are many of these foods that are abundant and easy to identify. Absolutely, being vigilant and knowledgeable about what we harvest (and avoid) is vital. There are deadly, poisonous things out there, but not everything that’s wild should scare us. Remember, technically even common garden-grown plants like rhubarb, kidney beans and tomatoes can be toxic if eaten wrongly.

Oh, yes, and lastly again, chanterelles are more or less seasonal. They don’t store well, losing flavour when dehydrated, and can’t be found out of season. While some people pickle them and others will sauté then freeze them, for the most part, they are enjoyed as a fresh food. Foraging them allows you to make the most of the mushrooms while they are around. Plus, picking them seems to encourage the growth to spread. 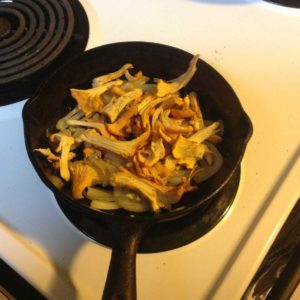 How to Prepare Chanterelles

Chanterelles are respected for their versatility. They can carry a side dish all on their own, simply sautéed in some oil or butter with onions and garlic. We like this on our homemade sourdough (get fermenting!) for breakfast. They can also be tossed into pastas or onto pizzas, and they are renowned for really kicking up omelettes and scrambles.

The important thing to be aware of with preparing chanterelles is that they shouldn’t be washed. They’ll absorb the water, and it’ll make them lose their amazing texture. We have a mushroom knife with a brush on it now, but we used to use a firm-bristled paint brush to clean them. It’s best to just knock any dirt off the caps, shave the bottom of the stem away, and call it a day. You’re already about to eat wild mushrooms after all, what’s a little speck of dirt or two going to hurt?

Disclaimer: Definitely don’t use this article as a guide for finding chanterelles. Be vigilant and do your own research and verifying. We learned most of our foraging on our own, but in addition to using books and online articles, we always posted photos (of the in situ location, bottom, top, and side view) on forums and waited for multiple people to corroborate with our identification. This article is for inspirational purposes only. There are plenty of qualified experts (with blogs and sites) out there to help.

August 25, 2020
PRI Newsletter
Get the latest permaculture news stories straight in your inbox