For the second time this year, I’m in the midst of transferring the rocks of a felled chimney to our property. These chimneys have come from dilapidated cabins, roughly 100 years old, that my wife Emma and I have purchased—$200 USD each—and taken apart for repurposed lumber. Well, that’s how we described it, “for repurposed wood”, but the truth is we’ve coveted the rocks from the chimneys every bit as much.

Rocks have a mixed reputation. Gardeners and farmers are often cited as hating them, pulling them from garden beds and fields in an effort to save tiller tines and tractor equip. Try digging a hole with a rock in it—we’ve been putting in fence posts, and it’s been a rocky nightmare at points—and rocks fall quickly out of favour. At their worst moments, there are bulky, weighty pains that slow down progress.

But, we shouldn’t forget, in these times of despair, that rocks, stones if we want to be sweet, are incredibly useful. Like weeds, which can be edible or medicinal or soil-building or deficiency-indicating, if we take the time to appreciate them, rocks can be fantastic allies on a permaculture site. In an effort to give them their due, I decided to reflect on some of the ways I’ve used rocks in the last year and possibly further back than that.

Rocks are amongst my favourite garden borders. I like them more than tree trunks or milled timber because they allow gardens to occur in more organic shapes, moving with contour lines and making curvy edges. Last year some time, Emma and I made a trail through the forest near our current cabin, and not long after, we took stones that were tripping hazards out of the pathway to use for garden borders for a growing space we were making. Of course, it’s not the first time we’ve used rocks for garden borders, and we’ve definitely done it since.

We’ve also taken advantage of rocks to work as thermal mass heaters. As we’ve adjusted to being in a temperate climate, as opposed to the tropics, we are constantly experimenting with extending our growing season. After building some cold frames for late fall and winter gardening, we realised we could use rocks within the frames to help with heating.

They absorb the heat all day and slowly release it within the frame at night. We’ll be using the same method on a larger scale for passively heating the cabin we are going to build.

In the mornings, I work as a gardener/caretaker in mountainous development. One of the projects I did last year was dismantling the stone ring from what used to be a garden bed around a now-departed tree and using the rocks to build small terraces. The terraces were put in place to pacify water flows that were causing some erosion issues along roadside hedges. It’s been the rainiest season on record this spring, and they are still working!

Our major rock project this year, and what took up about half of the first chimney we dismantled, was creating an earth spillway for the dam on our property. We used the bulky stones from the chimney to create a cascading waterfall effect down the backside of the spillway, and we lined the walls of the spillway channel with the flatter stones to prevent erosion. Then, we actually sifted small stones—what looked similar to the rocks in the creek bed—from the soil where we’d done a perk test. The spillway isn’t in full use yet, but it has been tested and stayed true through several massive rain events already.

Stepping stones have become something that people now go out and buy as concrete moulds, but a good collection of slate stones or flat rocks makes a much more attractive path of stepping stones. I’ve done this at work in the last year for sure, and we have some possible areas on our property where a stepping stone path would function nicely.

While finding a rock in a hole on the way down is infuriating, having it to use when setting the post in place is often worth the trouble. Of all of the stones unearthed while digging holes for fence posts, the bulk of them have gone right back into the hole from which they emerged. They are now working in my favour, holding those posts steady and allowing for a stable, no-concrete fence. 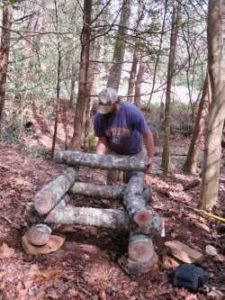 Though I’ve yet to use rocks as a foundation for something, it is definitely in the upcoming plans, and when taking down these old cabins, it’s been amazing to see them sitting on the same rock foundations they were built on in the early 1900s. As we trial and error our way through the modern building process, the permit maze, it’s a great reminder of how homes could be built without all this crap and last for more than a lifetime. That hardly seems the goal these days.

I suppose we’ve technically used rocks for the foundations of our mushroom logs, so there we go.

The reason our spillway is not yet in full operation is that we’ve allowed our stream-fed dam to remain drained—the water flowing beneath the dam wall through the old, rusted out pipe spillway—while we get some work done to it. We are going to scoop up the sediment to build an elevated rice/lotus paddy section—a la chinampas—between what will be the main pond below the paddy and a sediment pond on the upstream side of the paddy. The two ponds will be connected by a keyed-in rock gabion to allow the water through but drop the sediment behind.

I’m a firm believer in functional gardens, but I also like to build gardens that I enjoy looking at. It makes them more functional because I’m always happy to go out and have a mosey through them. One of my favourite garden features to build is a herb spiral. For one, I think it’s an easy way to begin explaining the ideas we utilise in permaculture design. Two, they are fun to build. Three, they are an easy way to put cut-and-use herbs close to the kitchen door. And, on it goes. I’ve built them with other materials, like logs and bricks, but my favourite herb spirals—and my first—are those built with flat stones. We just made a little one on our property, just off the (future) screened-in porch/outdoor kitchen.

Unfortunately, none of the current rock piles happening with me are meant to be animal habitat, but undoubtedly, they are, and some of the rocks will make it out into the forest garden to work as little rockeries for snakes and lizards and toads and frogs to call home. These, of course, will help with pest control. Making rock piles is somewhat like putting together an insect hotel. If you build it, they will come.

Well, this list was surprisingly easy to come up with, and I’m finding I need to curb it a little. I’m remembering using rocks as mulch when volunteering in southern Spain, where things get awfully arid. I’m thinking of times where rocks have been invaluable tools for pounding something, holding something down, lifting something up, keeping something in place, and…you get the gist.

The short and simple of it is that having a rock pile somewhere, a place where they can go until they are needed, just makes a lot of sense. They are an amazing natural resource, a multifunctional part of the permaculture site and something to be valued, even if it’s only by recognising the future project that could come to be.

August 13, 2020
PRI Newsletter
Get the latest permaculture news stories straight in your inbox