As someone who had already actively viewed everyday lifestyle choices as consequential acts, one of the things that excited me about permaculture was it worked outside of the mainstream jargon of environmental activism. This movement wasn’t asking me to turn off the tap while I brush my teeth or recycle plastic bottles; rather, I was looking at how to source that water and get the most from it. Plastic bottles felt completely outside any choice I’d responsibly make.

Within a permaculture lifestyle, the regular (free online) carbon footprint calculations don’t really compute. They aren’t created for people planting food forests, harvesting rainwater in swales, and designing homes for passive heating/cooling. I wanted those larger cultural shifts, a complete reimagining of how we can live, rather than 1,000 bandaids on what we were doing wrong. Even so, we can always have our eyes opened a little wider.

My wife Emma and I lived a different lifestyle that didn’t compute. We worked (and existed) abroad for over a dozen years, so the notion of a fixed address, shared bank account, or a car of our own weren’t realities. We lived in jungle huts and carried all our worldly possessions in a backpack. Then, we moved to North Carolina a couple of years ago so that we could buy some land and create an off-grid homestead for ourselves.

We’d gotten to a point where we’d hit the limits of our life abroad, and we hoped to push into lifestyle choices—real infrastructure change—we simply couldn’t make without a home of our own. Unfortunately, moving to the States has taken us out of less developed countries, without the means to be extravagant, and into one of the world’s most wasteful and, ironically, environmentally concerned societies.

Life in the USA has been, and continues to be, a real exercise in “the fourth ethic” of permaculture. And, recently, a writing assignment for another website had me looking at carbon footprints, and I was disheartened to consider my own, which has undoubtedly increased during this time. Sure, I forage more than ever, have a nice big garden, and make all sorts of ecologically-minded decisions, but life in rural North Carolina thus far is too difficult without a car.

Playing with the carbon footprint calculators, I learned that that addition to life—a three-day-a-week job and weekly trip to the supermarket for which I drive—accounts for over 50% of my footprint. It has made me want to engage with the larger structural changes in lifestyle that really matter in this regard. I want to consider, personally, what I’m doing and not doing on a level that recognises the difference between going in for efficient lightbulbs and taking a roundtrip flight across the country.

The biggest factors in our planetary carbon footprint come from sources I might not be able to personally change, but they are factors that I can make choices about. For example, I may not be able to single-handedly stop palm oil production, i.e. rainforest deforestation, but I can pull myself out of participating in it by boycotting products that rely on palm oil. This, of course, is much easier living a permaculture-y existence that focuses on whole foods and home food production, which typically keeps me away from products that would have palm oil.

In this way, there are factors to carbon output that matter on a personal level. With some of these, I’m functioning in a manner consistent with the choices I’d like to be making, and with others, it’s a moment of transition. But, the point here is to share with those who are looking to make a real effort to reduce their footprint what actually accounts for most of the carbon for an individual in an industrialised setting. These are the five that seem to make a huge difference.

Emma and I had become painfully aware of this towards the end of our travels. We minimised our flying—shooting for less than a flight a year—and factored this largely into our routes. Since moving to NC in May of 2017, we’ve taken one flight from here to England (to visit her family). However, we did make a serious error in this. We flew from Asheville to Charlotte (about 120 miles driving), which would have seriously upped the carbon footprint of our trip. Taxiing and taking off are the biggest offenders for jet fuel consumption; gliding long distances the least consumptive. In other words, non-stop flights, if air travel is going to happen, is notably better in terms of carbon footprint. Oddly enough, they tend to cost much more.

A little over a year ago, Emma and I bought our first car together: a used, mid-sized pick-up. We live about 20 miles from the nearest town, and there is no public transportation. And, we are building a homestead, which requires transporting materials regularly, at least for now. She works online, which doesn’t require commuting, and I write online. But, I’ve also gotten outside work that has required commuting.

I carpool as much as possible, but this has driven our collective carbon footprint far beyond what we produced abroad. My individual footprint is easily above the already-too-high global average. This, perhaps, has been the most painful part of living in US for me, and an aspect upon which I will make some serious changes in the near future.

We eat products instead of ingredients. We eat an overabundance of factory farm meats that are raised in inhumane conditions, fed a diet of monoculture grains, injected with multiple medications, and ultimately shipped miles away to the supermarket. The food we choose to eat has a massive impact on our carbon footprint. 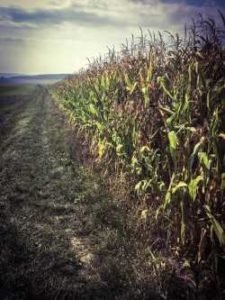 “Corn street” by Jerzy Durczak is licensed under CC BY-NC 2.0Permaculture has a different version of food, a movement towards locally sourced ingredients and, in particular, the call to grow gardens at home. We have been doing these things for years now. Furthermore, we are vegans on a mostly whole food diet. Veganism is often cited as a means reducing one’s carbon footprint, but this version of carbon calculators doesn’t accommodate for permaculture meat production, which would benefit the environment.

As we like to point out, it’s completely possible to be an unhealthy vegan living on potato chips and Oreos, and likewise, it’s possible to be vegan surviving on imported avocados and strawberries grown on fertilisers and laced with pesticides. We aren’t perfect, but we consistently make efforts to use organic, fair trade items when we do purchase things, making our veganism a positive in our carbon accounting.

The more we consume, from new cars to homes to toys to clothes to disposable cutlery, the larger our footprint. Eventually, and we are far past this point, the planet cannot keep up with the global consumption.

We do our best to consume largely based on needs (or carefully considered wants) and go out of our way to buy things secondhand. We get our clothes from thrift stores. Our truck and computers were previously owned. We’ve been taking down old houses to repurpose the wood and stone for our own cabin. We bought our bedding and cookware and tents and many of our tools secondhand.

Though we do occasionally buy things new, we carefully weigh our options before doing so. For example, we plan to buy a new wood-burning cookstove for the cabin because the older versions are much less efficient and, thus, much more pollutant. Plus, these items are generally used for decades.

Our systems don’t make enough of clean, natural sources of energy, and they don’t use water sensibly, e.g. flushing clean drinking water down the toilet. All of these things leave a massive, collective carbon footprint.

Emma and I have only lived off-grid a couple of times for a few months each. Nevertheless, the rest of the time we have worked hard to limit our consumption of grid-supplied energy by avoiding convenience appliances, such as air conditioners, clothes dryers, and entertainment centres. We’ll be off-grid when our cabin is finished.

We will also have a composting toilet in our cabin, but currently, in a rented place, we let the yellow mellow, wash dishes by hand, and wash clothes in full loads. We take showers on a needed basis rather than habitually, often using the creek for a bath. We mulch our gardens to minimise irrigation and make use of greywater when possible. In short, we act consciously, even when it’s sometimes tiresome. 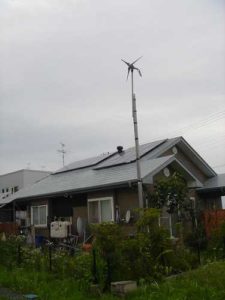 I write all of this not to compare our efforts with anyone else’s but in an effort to put honest thoughts and self-evaluation (this started with me being upset about my own driving) out there. It’s very easy to get pulled in with marketed environmentalism and forget that 1) buying stuff—even from 100% post-consumer recycled material or compostable plastic bottles—isn’t going to reverse climate change and 2) it is important to focus on the right things when we are striving for that.

The smaller efforts most of us are making with lightbulbs and bamboo toothbrushes, of course, count for something, but it takes a lot of them to equal one roundtrip flight. If instead of flying to the next G20 summit to protest a lack of effort by world leaders, we plant a garden or install solar panels, it might better serve the cause.

Featured image: “Buttocks” by ombrelle is licensed under CC BY-NC-SA 2.0