This article is Part 2 of a series that is mostly about chickens – not how to care for them, but how to appreciate them as being more complex and interesting than most of us give them credit for.

If you are interested only in chickens, and especially mother hens and chicks, this article will be fine to read by itself. But if you’re just tuning in and you want to know more about where interconnectedness comes into the story, and why it’s important, you’ll need to go back and read the beginning of Part 1.

A mother hen has at least 5 different types of cluck that I can recognize. (Maybe more, that I can’t.)

There’s a soft, soothing, calming cluck for caring for eggs and emerging chicks.

There’s a warning, rolling, growling kind of sound letting others know that she will peck if they come too close.

‘Follow me, stay close,’ for after the chicks are up and about, is easy to recognize. The chicks respond with a chorus of little peeps as they scurry along, keeping up. When a chick’s peeping changes from, ‘I’m coming,’to ‘Wait for me, I’m stuck!’ The mother’s metronomic ‘Follow me,’ cluck speeds up a little, and gets louder, as she retraces her steps, back and forth, until the lost chick is reunited with the rest.

‘This is food, eat this,’ is also easy to recognize. The little balls of fluff run swiftly to their mother’s head the moment they hear it, and she picks up the food and drops it in front of them, repeatedly, keeping it from running away if it has legs, breaking it up if it’s too big. 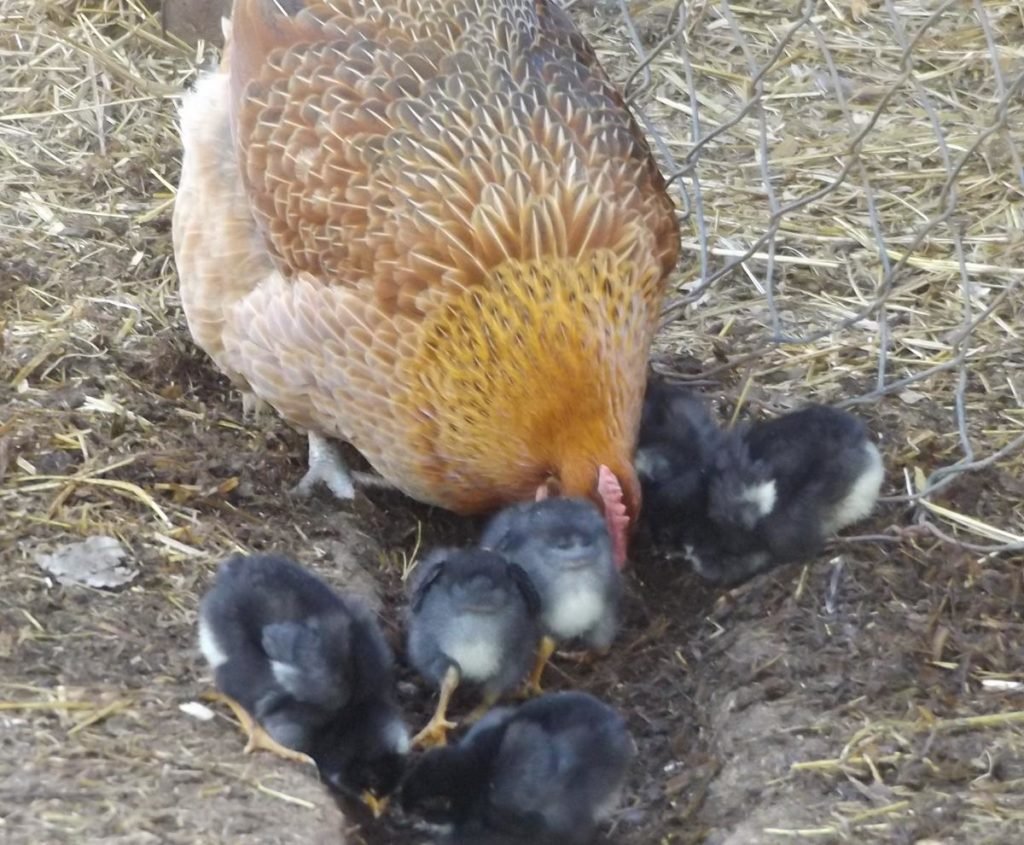 ‘Come, warm yourself and rest underneath me,’is more subtle, but still distinct, as the mother clears a little space under herself and squats, lowering her wings to the ground. Her chicks part the fluffy curtain of feathers and disappear from view.

What must be the true nature of a culture that is okay with replacing this miraculous complexity, this depth of rightness, with an incubator made of steel and plastic?

Who have we become, to have lost sight of the value of the warm breast and beating heart of a bright-eyed, careful, dedicated, happy and contented mother hen?

Whenever I watch mother hens with chicks I’m struck by the uniqueness of each mother, and each family.

Some mothers lead their chicks with loud, insistent clucking. Other hens have quieter voices and are less insistent, and the decisions about where the family goes seem to be more by consensus.

Some of the ​bossy, outspoken mother hens get frantic about scratching for food for their family, clucking agitatedly to the chicks to eat quickly before the food runs away. (An understandable behaviour for a bird that evolved feeding partly on insects that are quick to scuttle out of sight.)

The quieter hens are ​calm and gentle about indicating food to their chicks.

Perhaps these quieter hens are more domesticated. Maybe they’ve forgotten that they once had to rustle up their own food, and keep their chicks close in case of predators?

Or perhaps the loud, excited hens are extroverts, and the calm, quiet ones are introverts?

Hens that take care of chicks they did not hatch

Most mother hens recognize their own chicks and reject others, even others of the exact same age; but some will happily mother chicks that are not their own.

We once had two families of chicks hatched the same day, housed in adjacent pens. One of the chicks found a hole in the fence and would swap families as it suited him. The mother hen in the family he didn’t belong to allowed him to eat with her chicks, and then he’d go back to his own family when his mother called him and his siblings to eat.

Throughout the day, out foraging, he was always with his own family. Every morning at feeding time, until he was too big to fit through the hole, he visited the other family’s breakfast dish when the mother in that pen called her chicks to the food.

In a more recent example, one evening as the flock settled down for the night I watched four fully feathered chicks who are independent of their mother, settling down with a broody hen whose eggs have not hatched yet.

The mother seemed unperturbed, with eggs underneath and “nephews and nieces” crowded around for warmth, comfy and snug as could be.

These chicks have been independent of their mother for weeks, and I’ve previously seen them roosting up on the roosts with the grown-up chickens. Apparently when Aunty Blackie set up housekeeping down on the floor, they abandoned the roost in favour of a warmer arrangement.

My last example of hens who mother chicks that are not their own comes from my favourite chicken how-to book, “The Small-Scale Poultry Flock” by Harvey Ussery. Ussery describes a “super-mama” hen named Hope.

Hope had 6 chicks of her own, and next door to her was a pen full of day old chicks being raised under a heat lamp. Hope, according to the author, “asked to be mother to those new chicks.” He let her and her 6 chicks in with them, and she mothered them all.

But the story gets better: at the same time, Ussery needed a solution for 7 motherless goslings. He says he offered them to Hope, and she mothered them, too:

“…the centre of the action in the henhouse was Hope’s kaleidoscopic clutch—a tumble of colours, sizes, and shapes during the day; a tight happy clump spilling out from under Hope in a corner at night. And Hope was the happiest hen alive.”

The bold emphasis is mine. “Hope was the happiest hen alive.”

Isn’t that important? Doesn’t happiness – even “just” the happiness of some hen in a backyard henhouse somewhere, count towards a more whole, more beautiful world, a world that has a little more rightness about it?

Some mothers consider their job done when their chicks are barely feathered. They jump up high to roost in the evening, where the chicks can’t reach, and leave the chicks to crowd with their siblings for warmth. As soon as they can, the chicks follow their mother up onto the roost. 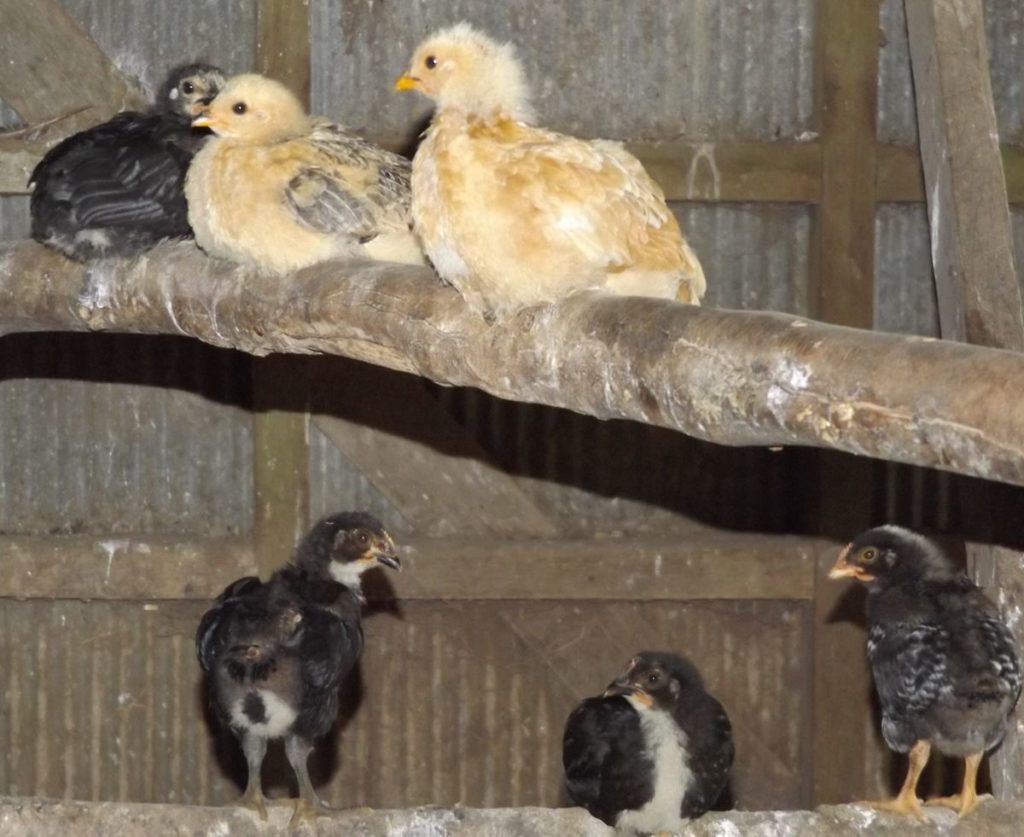 Some of these mothers still forage with their chicks during the day, and they rest up during the day together as a family, but some hens disengage from their chicks completely around the time that they return to roosting up off the ground.

Other mothers continue to sleep with their chicks for much longer. They stay on the ground at night and are still allowing their chicks to crowd underneath them when they literally no longer fit – a happy pile of fluffy feathers, with chicks underneath, chicks beside, and chicks often on top.

I once saw a tiny bantam hen with a single, large breed chick. She was still spreading her wing over him at night, long after he was towering above her.

I’ve also seen a family of wise old mother and four large, fully-feathered chicks who somehow managed to roost together, up off the ground, with two chicks underneath each side of the mother on the roost.

In this family, all the chicks turned out to be female, and the family stayed together for a long time. When they had grown into pullets (young hens), the daughters followed their mother, when she started laying again, into the nesting box. They sat with her every day while she laid her egg, for quite a long time before they laid any eggs themselves.

Perhaps they were learning about the birds and the bees from her? Or at least, about where to lay their eggs.

What might a wise old mother hen pass on to her daughters, that is not recordable or measurable by science? And — that we cannot measure it or define its value, does that make it worthless? I don’t think so.

Regardless of how long the mother stays with them, chicks seem to stay together until they reach sexual maturity. Large families of chicks do break into smaller groups, but invariably the same three or four sibling chicks can be seen foraging, resting, and grooming together until they are fully mature, at which time they seem to loosen their tight little sub-group, and become part of the flock.

Roosters are interesting, too

Now-a-days it’s not just mother hens and chicks that interest me. Our flock has become a constant source of interest, with individual characters emerging and displaying all kinds of chicken smarts. In particular, we currently have a rooster who does things I would never have imagined a rooster would do.

In the next article, I’ll share the things he gets up to.

Kate writes about thinking ​​differently​ and ​​living a more natural and sustainable life, at ARealGreenLife.com.

Download a free copy of her eGuide, Ditching the Supermarket.