I did a lot of research. I hummed and hawed, danced around the issue, came up with a veritable pros and cons type of list. Ultimately, the base of our food forest needed some fast-growing, nitrogen-fixing trees, and whether or not they were native came to feel somewhat moot. I found a good tree species. It was readily available (and free). What difference did it make if folks had deemed it invasive?

The mimosa tree, aka the Persian silk tree, officially the Albizia julibrissin, has been in the US for centuries now. A drive down any road here in North Carolina will likely involve passing several dozen along the side of it. If ever a tree were firmly established, invasive or not, the mimosa has become a naturalized citizen of the US. It ain’t going anywhere, and from what I can tell, no real efforts to make it disappear are underway. (Thank goodness, as they seem to typically involve the negligent spraying of toxic substances.)

That said, Albizia julibrissindoes appear regularly on the invasive species lists here in the United States and is listed second on the “severe threat” list in North Carolina. Also on the list are Russian olive and autumn olive, which, like the mimosa, are fast-growing, quick-spreading, nitrogen-fixing pioneer species. Once there, these types of trees sprout up everywhere. I get that.

Here’s where I struggle:

Many leguminous trees are pioneer species. They don’t grow in the forests and challenge established trees, like other members on the list, vines such as kudzu (Pueraria montana) or bittersweet (Celastrus orbiculatus). What the nitrogen-fixing trees are more prone to do is hit the open plains (yards, roadsides, disturbed spaces) and rejuvenate the soil. The problem, then, seems to me that they aren’t challenging forests as much as they are establishing themselves where their niche remains open. In those cases, they can be very domineering trees.

The Persian Silk tree seeds itself like crazy. My friend’s yard, where I harvested seedlings for the food forest, has sprouts coming up in any area that he doesn’t regularly mow. I fully expect, somewhat plan, that new seedlings will be popping throughout our food forest. In my mind, they will be a plentiful source of chop-and-drop mulch and a constant application of natural fertilization for the fruit and nut trees. These trees were of particular interest to me because of these qualities, qualities many “invasive” nitrogen-fixing legumes seem to have.

Furthermore, it’s not as if I’m bringing some type of tree that isn’t already well-established in the area. There are several just down the street, growing just beside the road, where forest was cut and cleared the way. The mimosa tree was introduced to North Carolina in the late 1700s. No, it isn’t native, but if we all only grew native plants, then there’d be a lot less corn and soy fields around here. The state isn’t objecting to those. 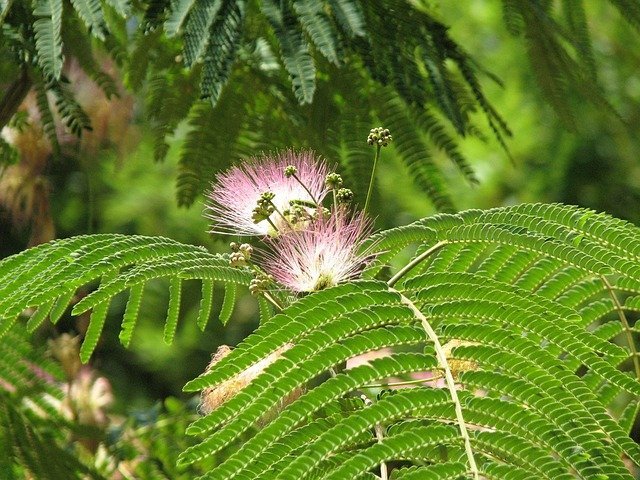 Here’s the other thing(s):

Additionally, the mimosa tree is just a dandy specimen to have around. It’s beautiful. The leaves are lacy and resemble fern fronds. It puts out pink pom-pom flowers in early summer. Not only are the flowers eye-catching, but also they smell absolutely fantastic. The trees stay relatively small, about 12 meters or less and bush out roughly the same. The leaves provide dappled shade that isn’t a horrible thing for cultivating young fruit trees.

On the checklist of things I’m after, this tree has a lot to be said for it, and though some may consider it invasive, I kind of consider it ideal.

Even so, I know that some people adamantly oppose planting the tree around these parts. I know that, in those open spaces where it thrives, it may out compete lesser natural flora for its space in the peeking order. Normally, I’m the type of person who fights to promote natives, and actively pursuing an exotic tree has left me defensive.

The other afternoon I was sitting with another friend who is into her native plants, and she saw a jar lid of seeds drying on our outdoor table. She asked if they were redbuds, so I begrudgingly confessed that they were, in fact, mimosa. She commented on the invasiveness, and I responded with the facts about how long they’ve been here and so on. It wasn’t ugly, and the topic dropped. But, it was a moment in which I felt the required to justify such a choice and doubted as to the efficacy of that justification.

The thing is that native redbuds are part of the plan as well, but, though they are in the pea family, they aren’t nitrogen-fixers. And, of the property my wife and I are developing, 3.5 acres of the 4.66 acres is in natural forest. The remaining area had already been cleared when we bought it. We looked for years for such a property so that we could protect a small bit of forest and have an area to develop our gardens without razing any trees to do so. Isn’t that doing our part for native vegetation? 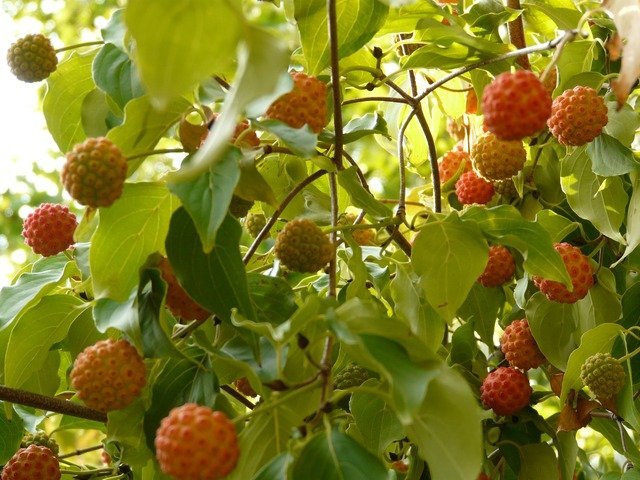 Here’s the rest of it:

We’ve planted the first of the mimosas, over twenty along the roadside border of the house, growing them to work somewhat like a privacy hedge along which we will grow other edible trees, such as the non-native Kousa dogwood (Cornus kousa), which has edible berries (and leaves) unlike the native dogwoods, which will also be around. I’d like to put in goumi berries, a nitrogen-fixer from the same genus (Elaeagnus) as Russian olives, throughout the food forest as an understory shrub.

But, plans don’t stop at trees. I’ll probably want to grow tomatoes, which are fantastic self-seeders, as well as many other non-native vegetables and fruits, most of which I hope will flourish and reproduce freely across the acre we are developing. I hope arugula, amaranth, mustard, dill, nasturtium, and so on grow wild and free. The potential of them doing so is part of what makes me want to plant them. I’m seriously looking into edible bamboo as well.

I guess the difficulty with the notion of invasives that I’m finding myself in is that, like the term weeds, the criteria don’t always seem to apply evenly across the board. The labeling sometimes feels misplaced or missing the point: If we clear forest and introduce a plant and it does what it is naturally programmed to do, i.e. begin to rebuild forests, has it invaded to challenge natural ecosystems, or have we just supplanted the normal regional sequencing? Is it wrong to do that?

Backyard Chickens, and the Interconnectedness of All Things