I imagine that when our grandchildren and great grandchildren read in history books about the supermarkets we relied upon for food, they’ll wonder what we were thinking.

My goal is to get to where our family can live without the supermarket entirely. There are many things we have yet to learn, but we’re well on our way.

We already raise all of our own meat and eggs, and most of our dairy foods. Some fruit trees are in, although not producing yet.

The number one food growing focus for us right now is learning to grow more of our own vegies. In this article I share the steps we recently took to get from bare ground to our first ever homegrown cauliflower.

By the end of the article you’ll appreciate that if we can do it, anyone can.

Step 1: Marking it out and setting up the framework

In early March, Alain and I finished clearing the space for our new covered vegie garden and erected our new vegie net, to see how it fitted.

Once we were sure we had it all in the right place, we took the netting off again to work on the beds. 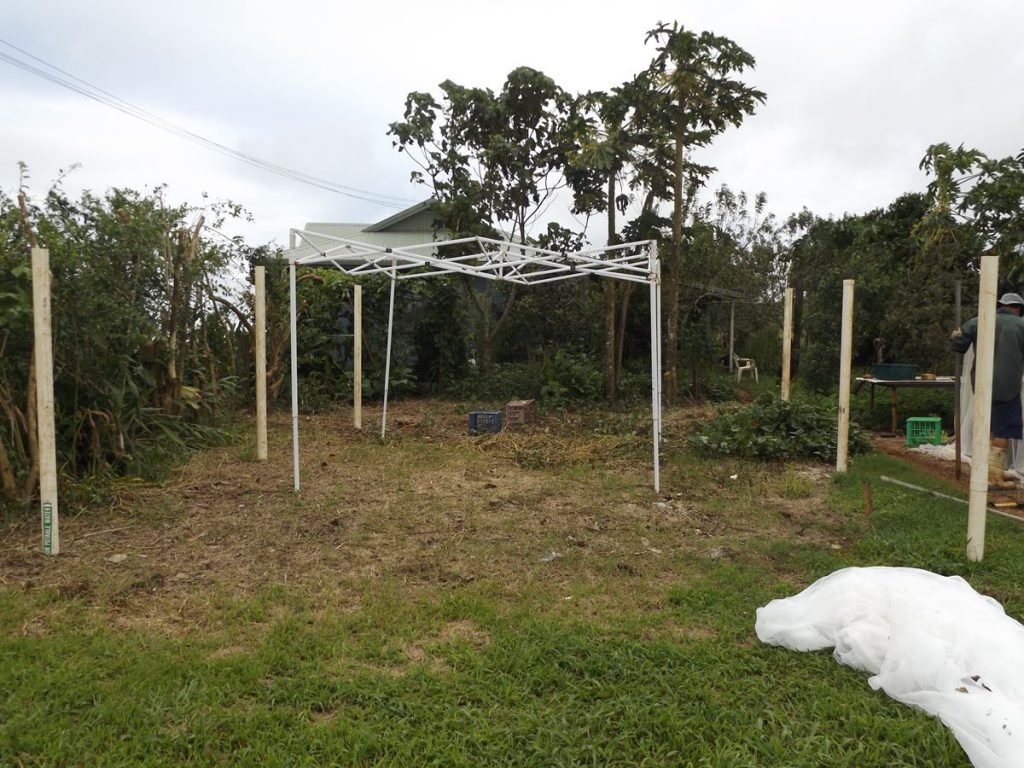 The 6 large white outside posts consist of a steel picket driven into the ground, with a piece of white pipe placed over them. The frame in the middle is an old marquee frame that we got second hand.

The area is approximately 6m by 5m.

For this garden we wanted to raise the beds (our climate can be very wet), but we didn’t have materials to create the sides of raised beds, and we didn’t want to spend money on such materials.

Also we didn’t have much soil available to fill raised beds with.

What we did have was a large pile of branches and sticks left from pruning messy overgrown trees and hedges, lying nearby, that we weren’t sure what to do with.

We decided to dig trenches, put the topsoil aside, fill the trenches with the sticks, then put the topsoil back on top to create mounded beds. Sort of a hügelkultur-ish idea.

So, we marked out the trenches, and Alain started digging, with a little help from his sidekick. 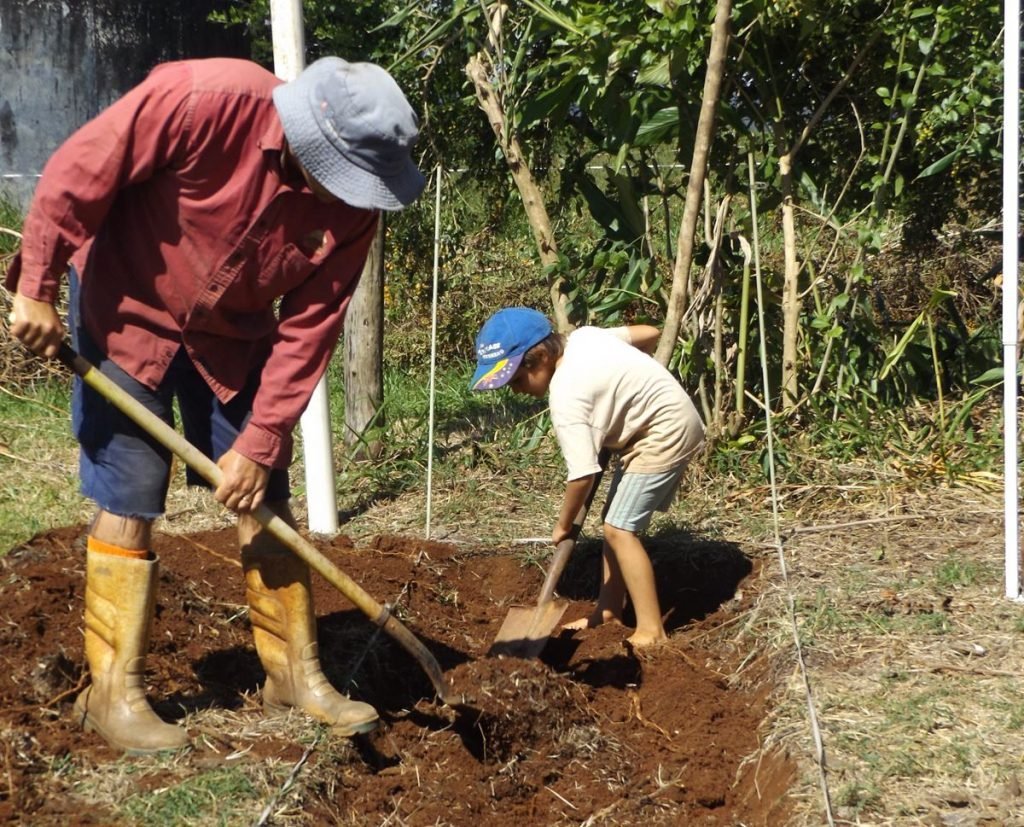 One of the paths can fit a wheelbarrow along them; the other two – not quite. Three of the beds you can reach right across from one side; one of them – you have to go around to the other side.

Step 3: Filling the trenches with sticks and piling the soil back on

The trenches were dug approximately gumboot depth – a minimum of about 40cm deep, but this varied too.

Next, Alain cut the branches and sticks into manageable lengths, and stomped them into the trenches. For the first two beds we then simply piled the soil back on, on top of the sticks. 25th March – first trench filled with sticks, and soil going back on.

By the time we got to the third bed (there were to be 4 in total) it had dawned on me that all that carbon under there might like to team up with some nitrogen, and maybe it would steal nitrogen from the soil around our plants. (Is that a thing?)

So, for beds 3 and 4, we put a layer of chook litter on top of the sticks, before replacing the soil. 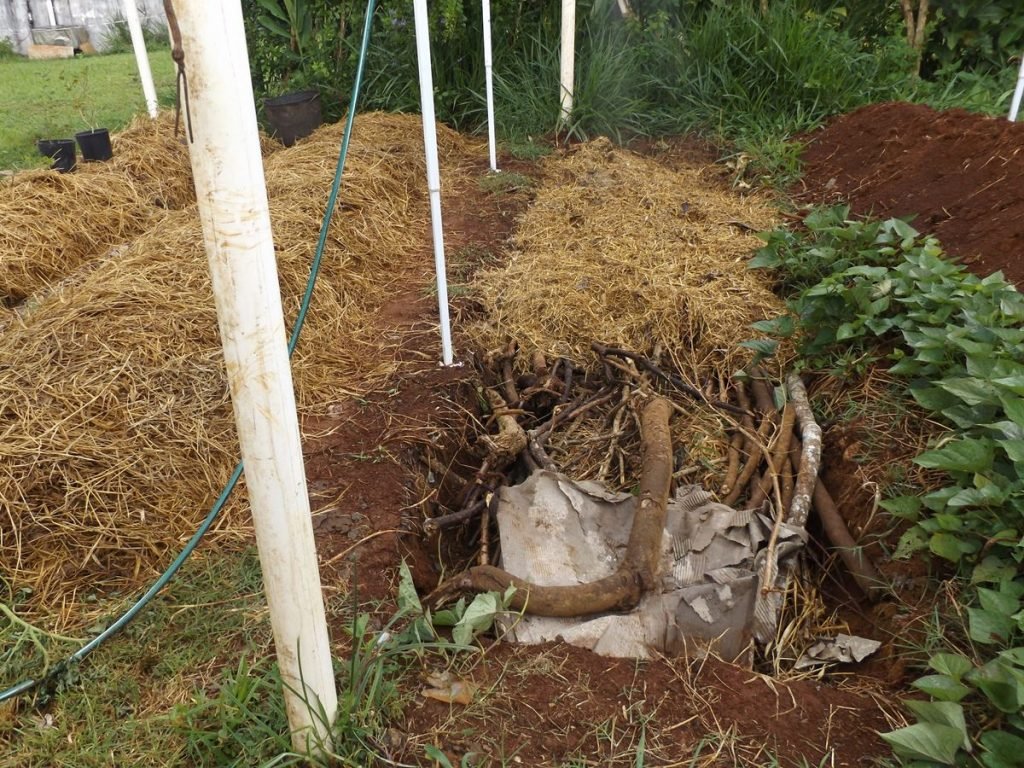 Chook litter being watered in on top of sticks.

In the picture, you can see that the sticks are of the all sorts variety, and we also threw in odd bits of cardboard that had outlived their usefulness elsewhere.

(In case you’re wondering about the sweet potato leaves you can see between the new bed and its pile of soil, this was a sweet potato patch before it became a covered garden.)

We didn’t hurry with this project, we had plenty else going on and we were often distracted from it. But we kept chipping away at it.

In early April Alain was still working on creating the third and fourth beds, and it occurred to me (a little late) that I could take the cardboard off the first two and mulch them with layers of hay, chook litter, and more hay, plus dustings of lime (our soil is on the acid side), rock dust and kelp. 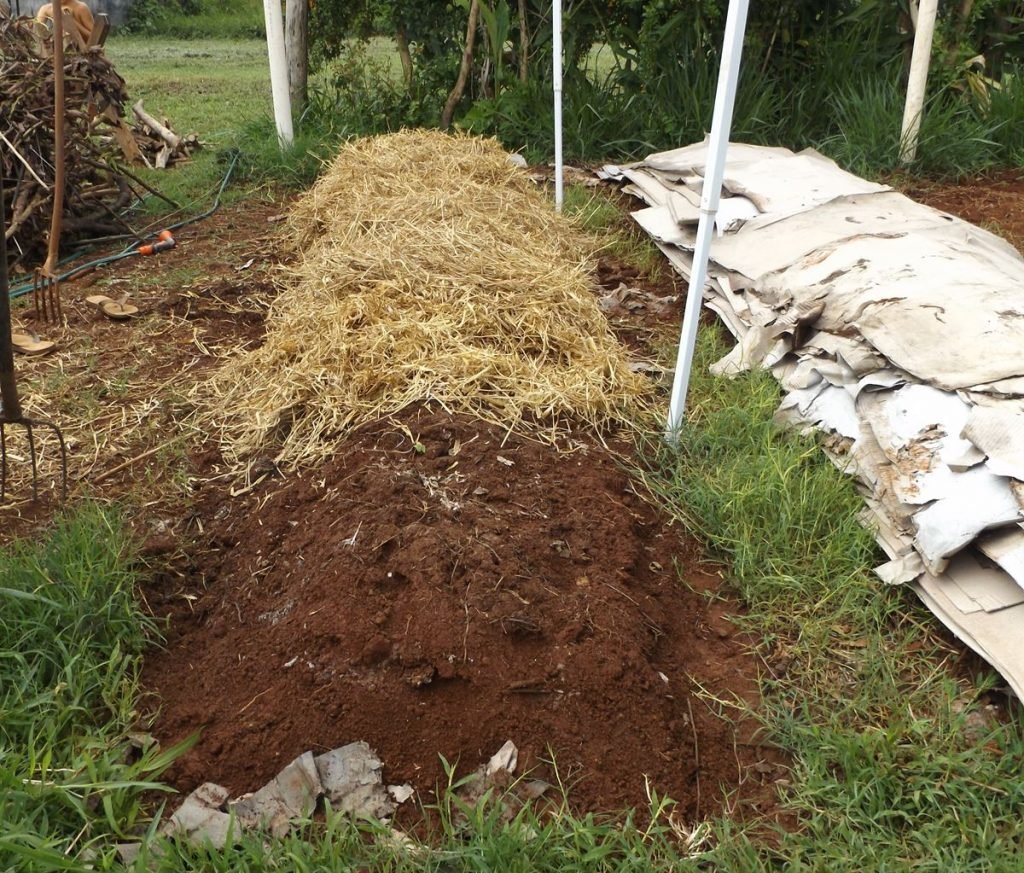 14th April – Bed#1 with cardboard removed and first layer of mulch going on.

In the background on the left in the picture, you can see the pile of sticks ready to be put into bed#3.

In late April I planted 3 blueberries and 3 arracachas and 1 comfrey in bed number 1.

I didn’t have a plan for what to plant in our new beds. I started with these plants because they had been sitting around in pots, and with all this new garden space to play with why not start by emptying neglected pots.

In early May I started planting brassica seedlings in the second bed – broccoli, cabbage and cauliflower.

Why brassicas? Because a friend of mine had brassica seedlings for sale, and it seemed like a good idea.

On the 2nd of June I planted snow pea seeds along the side of the second bed. I did buy those seeds. We like snow peas.

Step 6: Go camping (or whatever), and leave the garden to do its thing

Next, we went camping for a week.

When we came back, on the 11th of June, this is what we found: 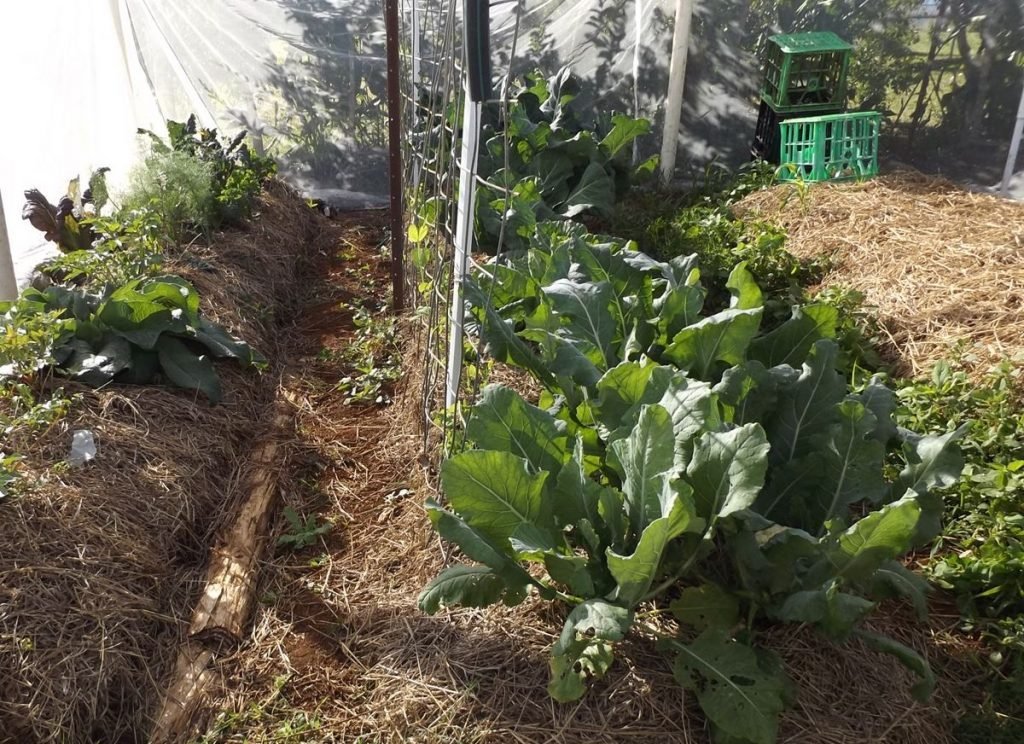 In the picture above, bed number 3 doesn’t have anything planted in it yet; I was thinking I should find some other plant family for it to break up all the brassicas, but—you guessed it—I didn’t have any friends who had seedlings other than brassicas and fennel… 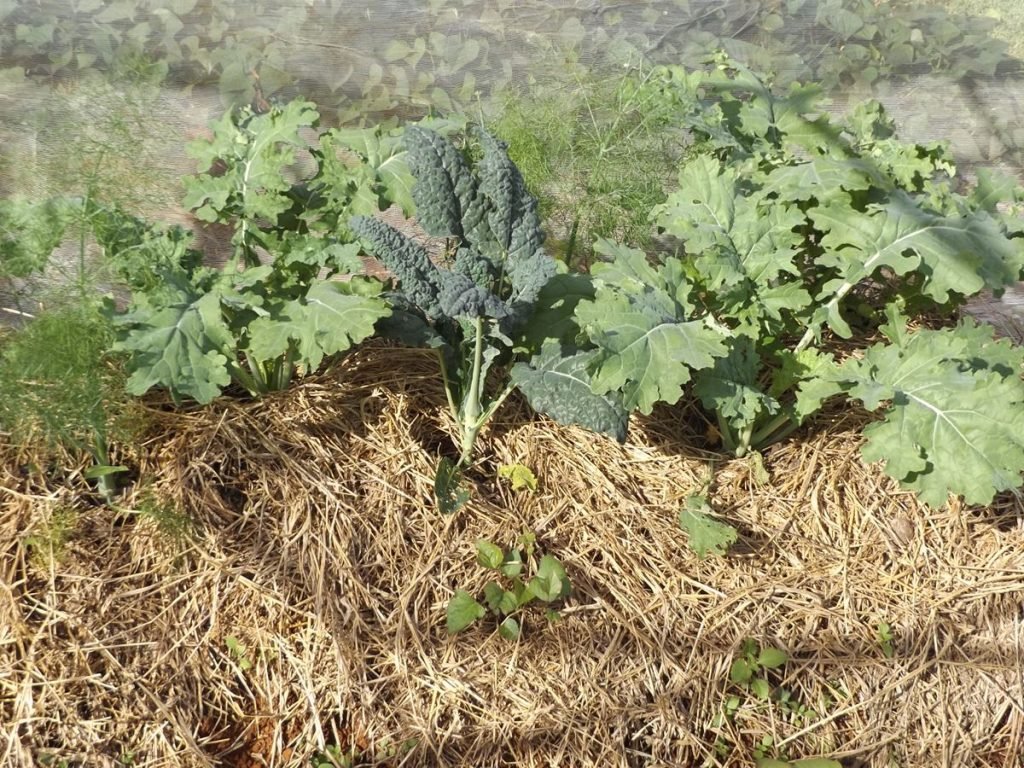 Photo taken from the side of bed number 4: fennel and kale. Yes, those are sweet potato interlopers coming up amongst the mulch. 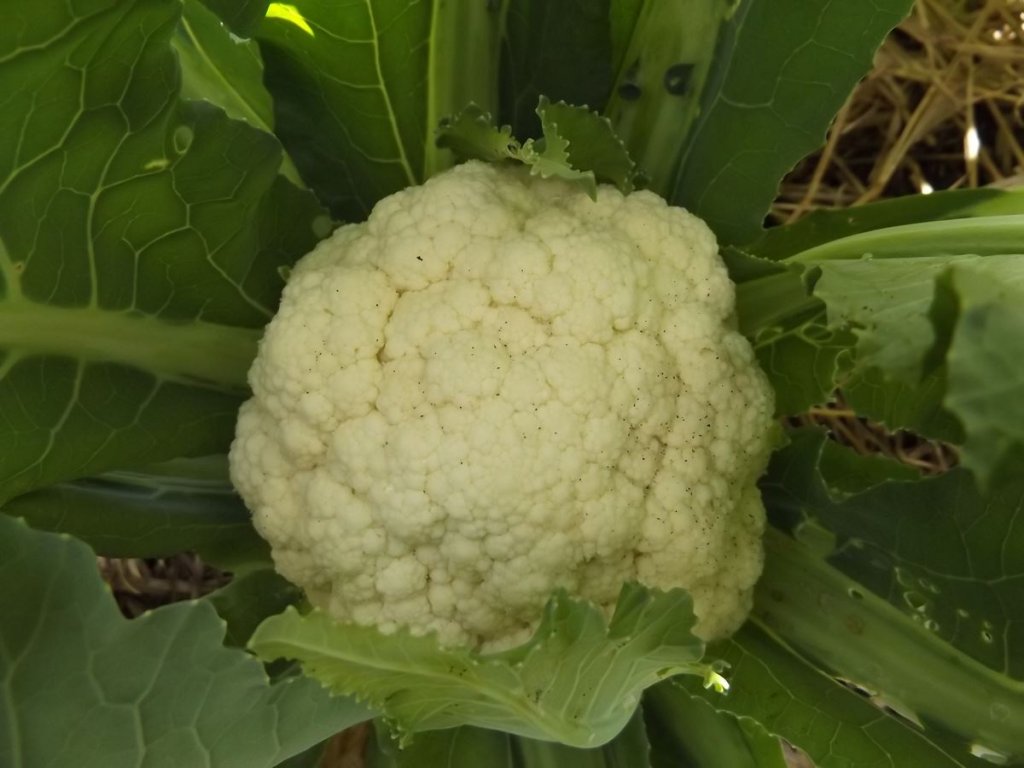 Our first ever homegrown cauliflower 😊 Who knew we’d be able to grow brassicas successfully!

What we still don’t know

We still don’t know how the beds with the layer of chook litter on top of the sticks will perform, compared to the ones that don’t have it. And we assume there will be some slumping and sinking as the soil filters down into the gaps between the sticks, and maybe some air pockets occurring around the roots of our plants as a result. We’ll find out when it happens, and no doubt, through trial and error, we’ll find out what to do about it.

What we learned for sure

Some of what we learned really felt like it was more about becoming:

3In practical terms, I would say I also learned two important lessons:

2. To have a plan (or at least, more of a plan than I did) for what will be planted and to have the seed or seedlings on hand.

Had we done those two things, we may well have been harvesting food from the first bed by the time we finished building the fourth one.

Most important of all however, is to just start. That way, you can learn what you need to know as you go along.