Dry composting toilets are an efficient, cyclical way of dealing with human waste without using and/or fouling fresh water, which is in ever-dwindling supply on the planet. Using clean water to flush human excrement sends it into either a septic system, which eventually has to be pumped and the sludge moved to larger facilities where it will then be dealt with, or sewer mains, where it congregates into a horribly toxic stew that requires serious chemicals to get into a slightly less toxic state. On the other hand, dry composting toilets turn that “humanure” into valuable fertilizer.

Flush toilets, which are the vast majority, account for around a quarter of the water used in American homes, and while those numbers are improving (and are a bit better around the world), it still doesn’t negate the fact that we are using precious fresh water for flushing. What’s more is that, once our waste mixes with water, it becomes much more likely to contaminate other stuff, especially when our collective waste is piped together into huge concentrations. It might have made sense in the urban squalor of Victorian times, but times have changed.

The concept behind dry composting toilets is quite simple and extremely effective, much the same as a basic slow composting system. Humanure is a nitrogen-rich element, so we add carbon to it and create a balanced mixture for decomposition. Unlike compost, with humanure, we keep it sequestered from our crops and off the ground, and we allow it ample time to get rid of pathogen issues. Water is taken out of the equation completely, as is the municipality. We can have the power and knowledge to deal with our own waste and prevent it from being a problem.

While some people worry about the smell, the fact is that, like compost, if there is a foul odor, something is afoul: There probably isn’t enough carbon. Each time the toilet is used, rather than flushing and using water, sawdust or wood shavings (shredded leaves, straw, etc.) are tossed into the compost bin. This absorbs any odor and becomes the bulk of the resulting compost. If smells are an issue (and, let’s be honest, flush toilets get them, too), just add another scoop of carbon material. Also, ventilation pipes are usually installed to allow air in and out.

Additionally, people (and government agencies) are rightfully concerned about health risks involving pathogens and other things, like medication, remaining in the waste. With composting toilets, users have much more control and awareness about what’s happening with regards to human waste and contamination, but the responsibility falls on individuals to maintain a healthy environment. Consequently, government regulations still tend to discourage their use, making permits for composting toilets an additional challenge for builders.

While some apprehension isn’t unfounded (pathogens are a serious issue), maintaining a safe composting toilet is, in fact, very easy. Moreover, they are much safer than pit latrines and, similarly, drop toilets, which are more likely to contaminate water sources, particularly underground. Even septic tanks sometimes overflow and cause serious issues. For that matter, municipal water treatment plants, with all of their chemical cleaners and machinery, only remove about half of the pharmaceuticals excreted into the water system. Dry composting toilets must be maintained well, but at least, they provide a useful end product rather than more problems to deal with. 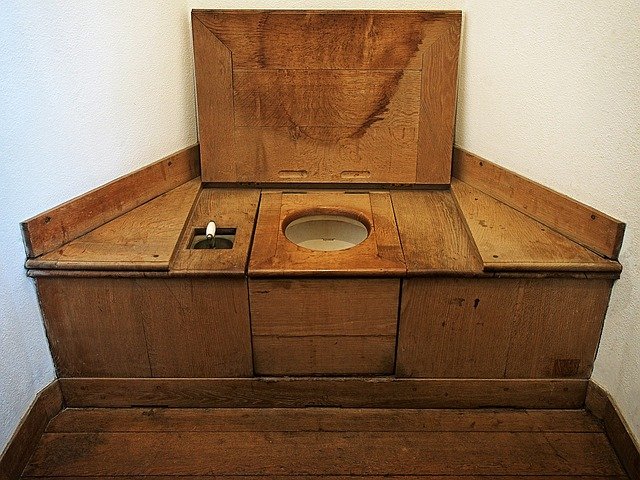 There are appropriate composting toilets for whichever kind of setting one finds themselves. Self-contained versions that create small quantities of humanure compost in the toilet itself are commercially available. The resulting compost can then be applied safely to ornamental shrubs and trees to grow gardens. Other home versions have separate tanks (in the basement) where the bathroom business goes to do turn into compost, and they are generally the preferred option because they don’t have to be emptied as frequently.

For more rural setting, the options abound. The Humanure Handbook is a fantastic read, well worth the time and meager fee. The version that is ultimately promoted in it is a basic seat over a five-gallon bucket. When the bucket fills (or several buckets with lids are all full), the humanure is put into a separate composting bin, covered, and left to do its thing. It does require closer handling of the fresh excrement than other designs, but it works just fine. The full buckets eventually fill the bin, and it’s left to compost for a year or two as a second bin is filled.

Thunderboxes are another great composting toilet design. Essentially, a raised platform sits above two enclosed chambers with access doors. The platform has a hole cut in the floor above each chamber. A toilet sits above one chamber until it is full, at which time it is moved atop the second chamber. The original “active” chamber now rests while the new active chamber fills. When it fills, the “resting” chambers can be emptied, the compost used, and the cycle repeated. If space allows, the nice aspect of this outhouse version is that it is less maintenance.

One of the more popular designs in Australia is the wheelie bin composting toilet, which makes use of repurposed wheelie bins as the compost containers. Toilets are connected to the wheelie bin. When the bin fills, it’s sealed up, wheeled away, and another one replaces it. The full wheelie bin is left alone as the humanure composts. This system works great, and even better, it’s created using upcycled materials.

For more info on the wheelie bin composting toilet, check out Geoff Lawton’s instructional video on how to make one, start to finish.

Real food does not come from supermarkets: 6 steps from bare ground to homegrown cauliflowers

September 8, 2020
PRI Newsletter
Get the latest permaculture news stories straight in your inbox