When I first began growing food and working with ideas of permaculture, I lived in the tropics where many edible plants leaf out large and are exceptionally stunning. Moreover, the places I found myself building gardens tended to be free-for-alls, where anything goes and HOAs didn’t interfere with what people planted on their property.

Last year however, after twelve years abroad, I moved back to the US. Where often people aren’t allowed to grow food at home. Because I’m more into rural areas, I don’t foresee much issue in this regard to me personally. However, I’m often asked for advice and eventually, I may do some consulting work.

Suddenly, the idea of having to gett around these committees and associations seems an important avenue for getting people into home food production. I already knew that it was possible to create an “ornamental” garden entirely with plants that are edible. However, now in the temperate climate, it was time to learn some of the plants with which to work.

Sticking with the principle that perennial plants are always a plus, I would want to recommend several to go into the garden. The selling points – there are many. Perennial plants put fixed roots into the soil, which take nutrients less intensively than annuals. In terms of appearance, they often appear earlier and provide earlier blooms as well, and in many cases, they hang on a bit longer. Ultimately, they are lower maintenance, often spreading out on their own, which makes for easy gardening. 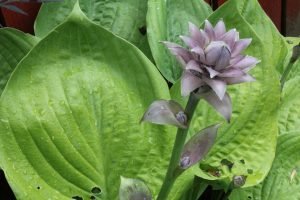 There are several ornamental plants that grow perennially, some of which are noted for being delicious as well as attractive.

Here in North Carolina, hosta is wildly popular with ornamental gardeners, but the majority that I’ve met had no idea that it’s a member of the asparagus family and is edible. For the most part, at least in the US, hosta is used for its broad leaves and late-blooming flowers. However, in Japan, it’s known as giboshi and is commonly served as a vegetable. The young, furled leaves can be steamed or thrown raw into salads. Older, tougher leaves can be added to soups, stews and smoothies and they are shade tolerant!

At the moment (early June), along the roadways, orange daylilies have sprung up everywhere. Though sometimes considered a weed, they add some serious beauty to any drive. That, and the entire plant is edible. The leaves can be eaten in small quantities and have a mild flavour of onions. The flowers can be used to fancy up soups and salads or stuffed like squash blossoms. The flower buds are great in stir fries, and even the roots and seeds are edible.

It’s odd that so many plants that are considered invasive are edible, yet no one is eating them. Dame’s rocket is another for this list. It was bought to the States from Europe, escaped from the garden, and now encroaches on native plants. However we could be eating it to subdue the spread. It has a spicy taste, akin to arugula, and both the leaves and flowers are edible. The seeds and sprouts are also fair game, and the aroma is enticing enough to be used as perfume.

Many bellflowers, of the Campanula species, are both ornamental and edible and there both annual and perennial varieties. The shoots and leaves, like hosta, can be treated like asparagus when young or put into soups and stews when more mature. However, the more sought-after edible element is the bellflower root, which is comparable to parsnips. Creeping bellflowers often considered invasive, like to reproduce plentifully, so thinning them out for food is probably a good idea.

Earlier this year, some of the first flowers on the scene were redbuds. Redbuds, which are actually kind of purple (magenta, some say) are beautiful little trees that rightfully get lots of attention for their early spring flowers but little for their nice foliage and understory status. They get even less note for the fact that those flower buds and blooms are edible, with a delicious sourness and high nutrient content. 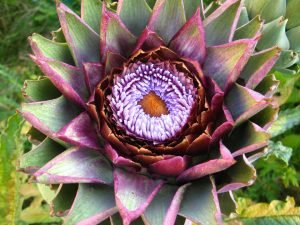 Furthermore, just because we know something as edible doesn’t necessarily mean it can’t be used for ornamental purposes in the meantime. There are many edible perennial options for the ornamental garden.

Though perennials certainly fit into the permaculture ethic well, that’s not to say there isn’t space for annuals, particularly those that are self-seeding and useful in other ways: attracting bees, distracting pests, providing beauty, and so on. 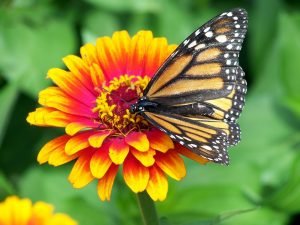 One of the most prolific nursery plants for the home flower gardener is the pansy. Members of the violet family, all pansies are edible, though those from nurseries might be laced with chemicals. The flowers can add color to salads. They can be candied for deserts or decorate hors d’oeuvres. Oils can be infused with them for a little bit of minty-ness.

While all chrysanthemums are edible, not all are known for being tasty. Flavors range: sweet, bitter, and peppery are all possible. In other words, it’s important to do a little research to choose the chrysanthemum best suited to the goal, but there should be something that’ll work, whether the end result is tea, greens, or edible flowers.

The beautiful zinnia is yet another commonly seen member of the suburban flower garden, but very few people take advantage of it as a food or a companion plant. They are good for butterflies (pollinators), cut flowers, and decorating food. As an edible, they aren’t considered particularly flavorsome. However, they are edible and bring some other benefits to the garden as well. It’s also very easy to save seeds from these for cultivating next season.

A personal favorite that I enjoyed immensely in the tropics, nasturtium is a tasty, self-sowing flower and spreading groundcover that should be invited into just about any garden. It is often included as a companion plant because it deters insects away from crops, but nasturtium itself is quite tasty. The leaves make good salad greens. The flowers add flavor and flare. And, the seeds can be pickled into “poor man’s capers”.

When it comes to bees, borage is a bigtime winner, and it’s edible and beautiful to boot. Borage has a cucumber-ness about it, the flowers and leaves and stems. The leaves do get a bit fuzzy as they age, and that can be a turn off. But, they are beautiful plants that seem to call out to wildlife, and they are deep-tapping specimens as well, acting as dynamic accumulators. Plus, they don’t taste half-bad and have medicinal qualities. 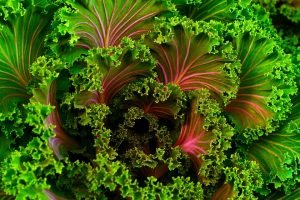 In the same breath, it hardly seems fair to ignore some crops because they are considered food rather than décor. Many edible annuals offer up showy displays of colors that make gardens burst with aesthetic prowess.

The main point I think, to get across with growing this sort of edible garden is that it needs to be utilized in order for the whole idea to work. The fact is that we aren’t accustomed to eating these ornamentals at dinner, so that notion needs to change. For me, it was a common issue in working with NGOs in Central America: there are lots of delicious, edible plants for struggling farmers to grow, but if they don’t eat them, then the effort falls short. As with any garden, the cultivator has to harvest and consume the crops to get the benefits.

Likewise, many gardeners aren’t accustomed to growing those beautiful crop plants — chard, kale, rhubarb and so on — as showy ornamentals, so that mindset has to change. They don’t need to be in rows. They don’t need to be carefully guarded or tilled in. They can simply be planted amongst other attractive plants to make an ornamental garden that just so happens to be nutritionally beneficial as well.

Anyway, this is one means—a collection of 20 types of plants—by which I’m attempting to imagine a bridge between the ornamental and productive garden, and I think it could work for those who are skeptical over making the jump from HOA standards into meaningful yardwork.

Permaculture chickens - 6 practical lessons from the evolution of chickens