With a recent transition from the wet-dry tropics to Zone 7b in temperate USA, this year’s planting schedule has been more on my mind than I’m accustomed to. My wife Emma likes to joke with people that we’d just stick anything in the ground down there and it would grow, but in a lot of ways, that was true, not a joke. Other than paying attention to the rain and drought, the season was basically always set to growing. We planted lots of what worked well, and it worked well.

We are now in North Carolina, where most of that well-working stuff doesn’t grow, or at least not the same. About two months removed from our first winter here, we are getting to grow our first temperate garden. Emma and I are very research-oriented, so we’ve spent as much of the year pouring through plans and frost points as we have actually putting seeds to soil. That’s new for us. We have traditionally been able to get right to work when we arrived somewhere. At the moment, waiting to garden feels like an ill-fitting pair of overalls: There has to be a strap or button or something somewhere to make it all slide into place. 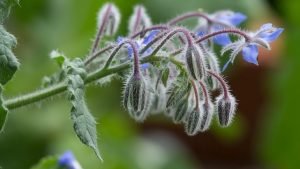 What We Are Planting

It’s important to note that we are cultivating what amounts to a gigantic allotment that we may or may not be using next year. Trees, berries, and other such perennials aren’t really options for us at the moment, so this garden is heavy on the annuals, which has made scheduling even more relevant. In a way, having a true spring has made growing annuals much more exciting. We’ve been full of anticipation, our nerves twitching with each new forecast.

We tried to slowly work ourselves into the season, starting early with cool-weather seedlings—kale, chard, spinach, peas, broccoli, arugula, fava beans, carrots, beets, and radishes. Later on, we began moving into seedling pots of warmer weather stuff, crops for the heat, such as cucumbers, squashes, tomatoes, okra, peppers, and beans.

We have additionally hooked into the foraging and edible support species, a few of which will provide some perennial stability (sorrel, chicory, upland cress, and mixed culinary herbs) in case we or someone else uses the garden again next year. We’ve included self-seeders like nasturtium, borage, and lambsquarter for more exciting edible greens (and flowers from the nasturtium and borage). Many of these plants help with both pest control (or distraction) and pollinators.

We will also be planting some staples. We’ll be cultivating a common combination known as milpa in Guatemala: corn, beans, and squash and we’ve included potatoes and sweet potatoes in the mix.

If half of these aspirations come true, we’ll be making good friends with the neighbors, but, with the soil only getting up to the right temperature in the last week, it still feels like a very big if… In Panama, we’d probably have cucumbers already. So far, two months in, we have little to show. 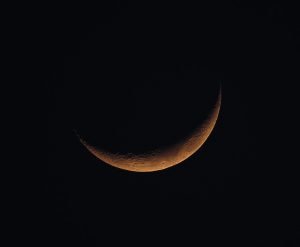 How the Schedule Came to Be

In the tropics, we’d paid some attention to the moon. For example, when harvesting palm branches for thatched roofs. Doing so during a full moon spelled doom because the bugs were more likely to be in it, cutting the lifespan of the roof dramatically. Other than that, we were aware of the rains: The dry season is incredibly dry in some parts.  It was more or less six months with no rain, and the other half of the year was six months with daily rain. That makes a difference with what grows well. Temperatures weren’t the issue.

In North Carolina, the last frost date is of grave concern, or at least to us it seemed to be the case. Many crops can’t take a night time frost, so to put them in the ground too early, meant a lot of work only to watch young plants wither away. We talked to locals who assured us that, though the last frost date listed for our part of Carolina may be 8th May, they have seen frost all the way until the 15th. We quaked. When the winter was unlike any they had ever seen, high temperatures in February, snow in late March, rain every couple of days, we could only speculate that climate change had spun it all askew.

The short of it is that, with a bold leap of faith and serious questioning of that, we tried to balance our planting schedule with both the moon cycles and the last frost date. The moon cycles dictated what we planted at each point in the month, and the last frost date was used to indicate what to plant each month of spring. We learned that combining these two things, while not rocket science, doesn’t always line up with standard seed-sowing recommendations. It resulted in a lot of intellectual reflection as to when, what, how, where, and why. We were fairly sure of the who: We were doing all of this, right? 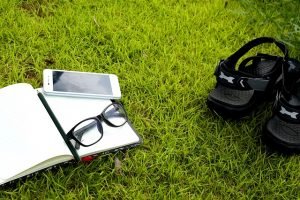 What We Think We Researched

Both of us are voracious readers of gardening books, particularly ones that leave no doubt in organic growing methods and seem to assume a garden full of food is available to anyone with the interest. From these books, we have assembled quite a few second hand ideas as to how temperate climate gardening goes. We know about cold frames. We know about cold-tolerant crops. We know about kohlrabi and coleslaw. We’ve read it all.

The plan started in the last week of February, when the moon was in its first phase, and the last frost date was nearly three months away. We started modestly with about eight of the following: selection of kale, spinach, celery, and broccoli in biodegradable newspaper pots. Once some sprouted, we moved them outside during the day when temperatures weren’t too vicious, and we kept them in at night.

March was meant to be the early bird special. The new moon saw us with paper pots of broccoli, kale, chard, arugula, celery, peas, and fava beans, When the moon cycled into full, we prepped the beds for the first root vegetables and put in carrots, beets, and radishes as companion plants, and we also started sorrel as a perennial as it is meant to grow during the root-intensive phase of the moon. These would be our early crops.

Mid-April left the door open for everything. We were only a month away from the old-timers’ assessment of worst-case scenario. So, during the first quarter, we planted all the same leafy stuff: kale, chard, and arugula, as well as nasturtium, creasy greens, lambsquarter, borage, and chervil. During the waxing moon, we let out an agricultural howl with nearly the entire summer selection: tomatoes, squashes, peppers, eggplant, and okra. We did the same root veggies as March, and we planted more sorrel, as well as chicory and a host of perennial culinary herbs. 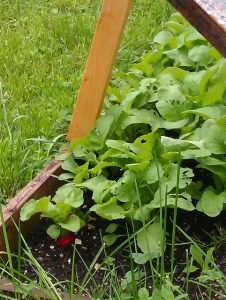 By and large, most of our seedling came up, but from there, the results have been a mixed success. Some things have boomed. The squash family has set up residence. Nasturtiums have headlined and borage has shown a lot of promise. Arugula outshined all of the early crops and radishes as expected, have settled in nicely. Fava beans towered. Other items have confused. The spinach and kale popped up, but seem to stagnate and backtrack even before the spring heat set in. The broccoli left us a couple of hopeful sprouts. The peas started the same, very well, and went funky. It’s the first week of May and we haven’t eaten anything from the garden yet, which—it seems—is to be expected.

Around town, as conversations have passed in hardware stores, nurseries, and gardens, we’ve learned than most people don’t even attempt to grow anything until May. Some people put in early greens, but most don’t bother. Of course, those people are traditionalists who grow rowed gardens with rather prescribed crops. We are attempting a permaculture twist, which ought to–one would think—make it all work a little better. We’ve read about people growing early spring crops and to be honest, I’ve written about it. So, what gives?

Well, here’s some of what we think we’ve learned…

Cold soil, regardless of whether or not a crop is cold-hardy, isn’t going to do us any favours with seed germination or even seedlings. Until the soil is warm enough, not much growth is going to happen. It’s not enough to get the plants started in and out of the house, the soil has to be warmed up.

That brings me to a second point:

Building a couple of cold frames is not the same as using them. We planted in seedling pots and moved them in and out of the house waiting until late March before we put the frames out. A warm spell made the spinach sprouts cook, so we waffled and took the frame off our root veg, which slowed them down.I believe what went wrong is that the cold frames needed to be on the beds before we’d planted anything, heating up the soil so that things could grow.

That brings me to a third point:

In the tropics, everything got mulched immediately and at all times. But as the books told us, in early spring in temperate settings, mulch actually slows down the warming process for the soil. It insulates the cool in as the outside temperatures climb. We mulched like mad without a warming period. Consequently even now in early May, I don’t think our soil has sufficiently warmed for rapid plant growth. But evidence says it may be getting there.

Year-round gardening, like the books say, is a lot more about growing when the getting is good and harvesting year-round. Nothing is going to sprout in the spring until it’s time. It’s much better to have those cold weather items ready to roll when their moment comes, rather than trying to get them started in the cold. We’re going to have to pay attention in the fall, and we’ll need to keep the seedlings inside next year (In our defense, at the moment we are staying in a cabin in the woods with insufficient sunlight).

Regardless of how this spring has and has not met expectations, we definitely seem to be walking away with a firmer grasp on how to go about it all a little differently next time. And we’ve enjoyed springtime forages of chickweed, wild onions, sweet violet, and dandelions. We’ve even lucked into some morel mushrooms. In reality rather than our fantasy, if we start pulling some crops by the end of May, we’ll be right on schedule with an early harvest here.

What to do with bad soil