Most people have an unconscious feeling that we can´t continue down the path we´re currently on. The supposed abundance witnessed on the shelves of our local grocery store might seem promising, but deep down we know that we can´t continue to outsource our need for food to a system that is so deeply indebted to the quickly depleting reserves of oil and other fossil fuels. We know that something needs to fundamentally change, and most of us understand that this change will most likely require us to get our own hands into the soil to begin to supply at least some of our own nutrition needs.

Before we get into the basics of how to grow your own food, it´s important to reflect on the importance of design. Growing your food in a sustainable way is much more than simply taking some seed, putting it in the ground and hoping something will grow. How we set up our gardens and fields and the principles behind our actions will largely determine if we´re successful growing an autonomous food supply.

The following principles of design are important when it comes to maintaining the fertility of the soil that grows your food:

– Whatever you take from the soil, you must put back.
– Implement cover crops, mulch, and green manure.
– Rotate your crops on a yearly basis.
– Grow a diversity of plants, not all for food.

Let´s look at each of these design ideas individually:

Whatever you take from the soil, you must put back.

The nutrients in the soil come from the slow decomposition of leaf litter, animal manures, and other organic material over hundreds of years. Within each handful of healthy topsoil, millions of microscopic bacteria, fungi, and other microorganisms are busy breaking down organic matter into the fertile black earth that we know as nutrient-rich humus that is the best soil available for growing our crops.

These nutrients are used by plants to grow the food we need. If we were to grow year after year of nutrient-needy plants on the same piece of land, the nutrients would obviously be depleted faster than they could regenerate. Also, by not replenishing the soil with the organic matter it needs, the soil that was previously teeming with invisible life slowly dies. We need to be aware of this basic reality and implement growing techniques that maintain the fertility of the soil and protect the web of life that exists within the soil.

One of the best ways to protect the web of life within the soil, and thus its continued fertility, is through using cover crops, mulches, and green manures. Cover crops are fast-growing plants that function as permanent ground covers. One of the worst things for soil life is baring the land and exposing it to the elements. Cover crops can be harvested, but are often grown simply to maintain the soil covered year round as well offer organic material for the soil life to decompose.

Mulch is brown organic matter such as leaf litter, straw or hay that is placed over the ground around growing plants. Mulch offers added nutrients to the soil as it decomposes as well protecting from erosion and maintaining the humidity of the soil. Green manures are specific plants that grow quickly, cover the soil, and add needed nutrients to the soil. All types of legumes (beans and peas, for example) have the ability to capture nitrogen in the air and “fix” that nitrogen in nodules located on their roots. Since nitrogen is one of the most important nutrients all plants need, implementing green manures into your fields is a way to bring added nitrogen into the fields for your crops.

Rotate your crops on a yearly basis. 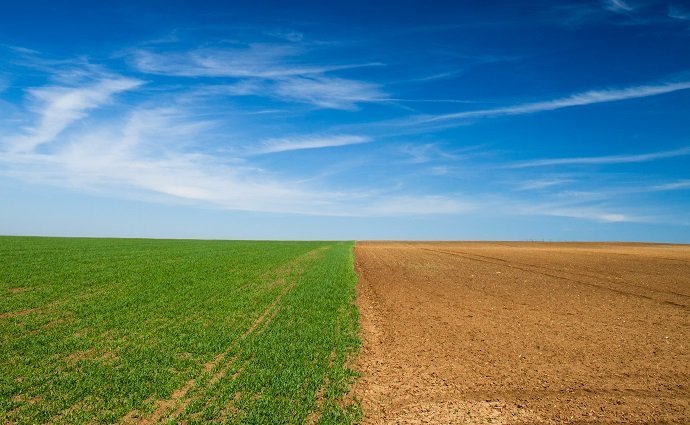 Some plants take certain nutrients from the soil while others (like the legume family) add nutrients to the soil. For that reason, it´s important to rotate the crops you have grown on a yearly basis. If you grow corn on one patch of land during season one, the next year you should grow beans or peas to help replenish the soil of the nitrogen lost during the corn harvest. It´s also important to implement green manures into your crop rotation cycles.

Grow a diversity of plants, not all for food.

Many times we may think that we need to grow every inch of land we have with some sort of food crop. However, we need to develop a more long-term focus and understand that our long-term survival will depend on helping the soil maintain its fertility.

Growing a diversity of crops also helps us prevent losses that could devastate our food supply. If we grew only corn but a plague of corn-eating locusts were to descend on our land, we would be in a world of trouble. If we were to lose our corn crop but also had wheat, amaranth, vegetables, and fruit growing, we´d be able to withstand the loss of the corn crop. Diversity always promotes resiliency and also has the ability to increase yields especially in small spaces.

Lastly, it´s important to dedicate parts of our land to growing plants that aren´t necessarily edible. Many green manures offer needed nutrients to the soil but may not be edible by humans. Adding flowers to the garden will bring beauty as well as help attract beneficial insects to control pests and aid in pollination.

Some Basics on Intensive Gardening

There are thousands of books on how to garden, and this article isn´t meant to be an all-inclusive guide on how to grow every type of plant out there. Each type of plant has specific soil needs, nutrient requirements, planting times, etc. Below we´ll offer information on two intensive gardening methods that allow for the continued fertility of the land while not depending on any outside inputs.

Biointensive agriculture is a system of growing vegetables, small fruits, and grains in a series of raised beds that have been “double dug” to ensure sufficiently loose and aerated soil to stimulate plant root growth. This system focuses on obtaining maximum yields from small land areas thus making it a great system for people living in urban areas or without access to lots of land.

The double-dug raised bed system is a way of digging down up to two feet into the soil to loosen the compacted soil and prepare it for your garden beds. After digging down one shovel depth, a spade is used to move and loosen the deeper layers of soil. The result is a garden bed that has been tilled close to two feet deep. The loosened soil will likely be higher than the surrounding soil, so wood, rocks or other materials are used to enclose the raised bed area. This bed is then covered with mulch or compost (covered in the next section) and is never stepped on so as to avoid re-compacting the soil that has just been prepared.

Since the soil has been loosened and prepared, it is possible to grow vegetables and other crops closer together thus improving yields. A system of crop rotation is managed throughout the system of raised beds and green manures are grown after every harvest to obtain mulch that will add to the long-term fertility of each raised bed.

The Hugelkultur system was developed by Austrian farmer Sepp Holzer. It is also a raised bed system but differs from bio-intensive gardening in that it buries logs of wood under a layer of soil. These large pieces of wood (preferably from deciduous trees, or trees that lose their leaves every year) will decompose slowly over many years. As they decompose, they will offer a slow-release fertilizer that will give nutrients to the plants that are growing on top of them. This system works extremely well if you live near a woodland or forest and have an abundance of felled logs and branches that can be made into a hugelkultur raised bed system.

Thoughts on a Permaculture Kitchen