The modern-day housing industry is notorious for leaving out any and all elements of design. Most home contractors design the houses they build around a minimum square footage (the more, the better) and a price range in the several hundred-thousand-dollar range. These houses are designed behind desks or in offices without ever setting foot on the actual piece of land where the home is to be built.

The actual piece of land where the home is to be built is a side thought at best. If there is some element that presents a disturbance, the bulldozer can be hired for $50 an hour and get rid of any problem whether it be a small hill, a large tree, standing water, etc. In most cases, the first step of any home construction involves bringing in tractors and backhoes to rip out any vegetation and create a level piece of wasteland.

A superficial coat of green grass supported by heavy applications of chemical fertilizer mask the fact that the house that is eventually built is sitting upon an ecological wasteland of infertility.

In permaculture, the process of design asks us to take into account how the different elements we place on a given piece of land can function together and interact in such a way as to contribute to the overall systemic resilience and health of that piece of land. The underlying goal for all permacultural design processes is ecosystemic health and abundance. The underlying goal for the industrial construction industry is higher profit margins.

Let´s consider the example of the direction in which a house is angled when built. For traditional construction, this is a side thought at best. The neighborhood street (which was also built without any conscientious process of design) determines where the house will go on the property. Most people want a large house façade angled towards the street with a nice green lawn out front. Now let´s say that house is being built in the upper peninsula of the state of Michigan near the Lake Michigan shore. The neighborhood developer designed the streets to squeeze in as many housing units as possible in order to increase his profit margin. Many of the streets have houses that would be north facing which is where the houses would gain less solar gain for passive solar heating options and where they would be most susceptible to the cold, winter winds.

The house contractor pays little attention to any of these details. Who needs to consider the angle of the sun when you can fill a home with hundreds of individual light bulbs and heat the home with a fossil fuel guzzling central heating system? In fact, if by angling a house towards the north where it was to receive less light, less warmth, and more frigid winds could up the price of the home construction through obliging the homeowner to invest in a more expensive central heating unit, most contractors would elect for that option.

Imagine now that another home contractor was set on redesigning homes built in that same neighborhood of the upper peninsula of Michigan. Instead of facing the home directly north, she turned the homes southward and built large double pane windows in the south-facing wall. This meant that when one pulled into the driveway, you were looking at the back side of the home. Whereas her fellow builders scoffed at her “ridiculous” design, the people who purchased the home probably appreciated the several hundred dollar savings each month from the heating bill. 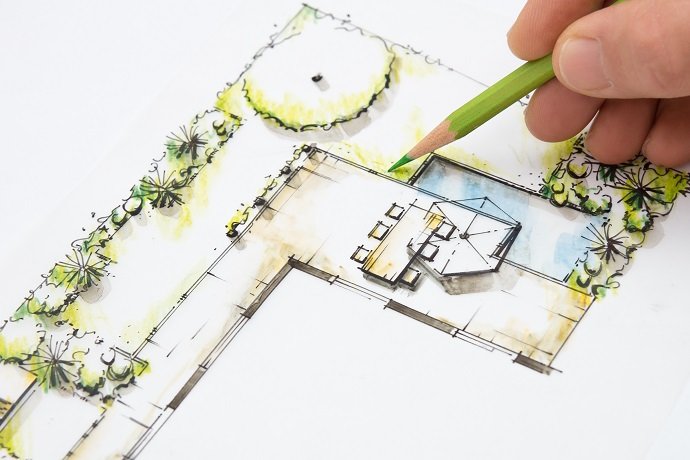 Our permaculture minded home contractor also planted several quick growing cedar trees on the north side of the home to block the winds off of the lake and also to capture the low winter sunlight for added warmth. Though this blocked the view of the lake (which adds monetary value to a home from the perspective of industrial builders), it increased the energy efficiency of the home. Additionally, instead of building the home on the low part of the land closest to the road and where the “view” was best (and most profitable), she built the home on the highest part of the land in a slightly wooded area. While this took away the view, it also allowed her to design for a gravity fed greywater recycling system.

Instead of simply installing more pipes leading to the city sewer, this design allowed her to direct excess irrigation to a small orchard of cold hardy apple trees and blueberry bushes that she planted on the low part of the land. Whereas most builder´s landscape plans simply include lots of green grass, her landscape design included native vegetation, strategically placed trees, and a small orchard. For a home, or any building for that matter, to become a sustainable part of the landscape, it is necessary to rethink how we design for those homes. The construction industry´s “first step” of bulldozing the land flat follows from our anthropocentric mindset that considers human´s needs as superior to the overall health and well-being of the wider system.

Fitting a home into the place we want to inhabit requires humility, first and foremost. Instead of imposing our will on the piece of land, we need to ask the place itself what it will allow us to do. Whereas we may want a house that offers a great view of Lake Michigan, the land might offer us nothing more than a spot for a comfortable cabin nestled in a forested part of the land. While we might prefer a 3,000 square foot mansion with a four-car garage, perhaps the land itself will only sustainably allow for a 1,000 square foot cottage.

For a home to become a sustainable part of the landscape, then, requires two things. First, we must begin by questioning the industrial mindset of largeness, grandeur, and opulence. Unless you´re planning on building a home on a 2,000 acre ranch in eastern Montana, chances are that the larger the home you want to build, the more unsustainable it will be. Scale means a lot when it comes to sustainably fitting a home to a piece of land, and as with most things, smaller usually is better.

Secondly, we need to begin the process of design by observing the natural world and asking ourselves what the land itself offers and what it denies. Whereas most people deride the idea of limitations to human inventiveness (if I have the money to build a 4,000 square foot monstrosity, who can stop me?), we need to learn to see those limitations as opportunities and prospects for greater resiliency.

If the land is telling us that we can´t sustainably build a 4,000 square foot home or that we would do best to forfeit our cherished view of the lake, instead of seeing these limitations as regrettable or inopportune, we need to be open to discovering how those boundaries imposed by the natural world open for us new paths towards a greater resiliency. We need to understand that true abundance and wealth come not from imposing our anthropocentric ideas and plans, but rather through observing the patterns and arrays of the natural world and seeking to fit our lives and livelihoods (including our homes) into the greater overall design.

The Mortgage as the Most Important Part of Modern Housing

Climate Change and the Challenge to All Forms of Agriculture