One of the tasks that I most dislike about the farming life is preparing the raised beds each time I want to plant out a crop of tomatoes, peppers, eggplant, or onion. While I do enjoy eating a fresh tomato from my garden, the tedious, repetitive tasks of preparing the garden bed, weeding, and then planting out a winter cover crop does take up more time than I would like. Pasturing chickens over the beds in the fall time once the crops have stopped producing, does save some human labor, but with our orchards, pastures, and forests to take care of, I often find myself without adequate time to dedicate to beds of annual vegetables.

An Experiment with Asparagus

About three years ago, I purchased a bag of about 5,000 Mary Washington Asparagus Seeds. The seedlings germinated well in our cold, wet, mountain climate, and my family and I decided to dedicate about half of our on contour garden terraces (about ¼ of an acre) to the Asparagus crop. After a day or two of weeding and preparing the soil, we planted out the crop, mulched them heavily, and then eventually forgot about the Asparagus for several months as other farm jobs took over our attention.

About six months later, and two days of heavy weeding, we found the asparagus crop to be thriving despite our neglect. While we weren´t able to harvest the crop for the next two years, the Asparagus grew to cover the entire three terraces, essentially shading out most of the weeds. During the spring of the third year, we were gifted with bountiful amounts of asparagus that not only would be harvested this year, but for decades to come.

Besides the effort to harvest the crop (what we call fun work) the main “labor” associated with the three years of the asparagus terraces was three days to prepare the terraces and plant the crop, and about 1 day every 3 months to weeding. Compared to the relatively heavy burden of work associated with our annual vegetable garden, we have since decided to dedicate 90% of our vegetable garden to other perennial vegetables. This will allow us to dedicate the majority of our time to our more profitable orchard and specialty grain crops, while still letting us enjoy the harvest from some tomato and pepper plants. The decision regarding what perennial vegetable crops to grow, however, was far from easy. 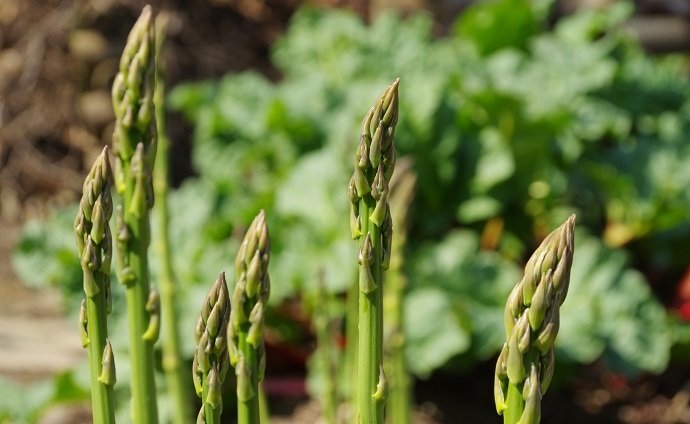 While kale is usually grown as an annual, we have found that in our cool climate with relatively mild, frost-free winters, we can easily grow kale as an annual. Since kale is much healthier and nutrient-dense than most lettuces and other leafy greens, we have no problem letting go of our lettuce crop. By simply harvesting the leaves as they grow towards the outside of the plant (and a couple occasional tender leaves for salads), our kale plants have been thriving for several years now.

We have tried growing potatoes for several years, but haven´t had much luck due to an abnormal amount of white grubs that eat away the growing roots of the tuber as soon as it gets started. When we planted Jerusalem artichoke as an alternative tuber crop, however, we found that the tougher roots were able to withstand the attacks of the white grubs.

The height and thick stalks of these plants also serve as a wind break to protect our asparagus crop from the heavy winter winds that affect our region. The crunchy, fresh taste of the Jerusalem artichoke might be an acquired taste but is a great alternative tuber crop once you get used to it. The bright yellow flowers are an added benefit for both decorative and pollination purposes.

The main cash crop on our farm is quinoa which we sell to several vegetarian restaurants in the city. When we found out that quinoa was related to the common “weed” Good King Henry (both are from the Chenopodium family), we planted out a small crop of this small leaf that offers tasty leaves, shoots and also flowers. These make wonderful additions to our kale salads and can also be added to soups and broths for added flavor.

This traditional, Central American shrub was (and still is) a major part of the diet of Mayan people. What we didn´t know is that Chipilín is also a nitrogen-fixing shrub that benefits other nearby plants with free nitrogen fertilizer. The small leaves have a unique flavor that is most commonly used an addition to soups and broths. If you want to try and make your own corn tamales, a handful of chipilín leaves will add a uniquely delicious flavor.

On the far edge of our farm, a small stream keeps the soil permanently wet, too wet to grow most crops. While we did plant a small cedar forest along the river´s edge, we also wanted to find some edible crop to plant along the river banks. Taro root is another perennial tuber that offers a huge starchy tuber every couple of months. Several shoots grow up around the main crop meaning that if you´re careful when harvesting, you´ll have a bountiful supply of taro root for years to come.

Reducing Resource Use (Energy and Water) in Industrialised Farms