In the last couple of decades, the local food movement has gone from a fringe movement to a major player the national food industry. Almost every major urban center around the country has several farmers markets, community supported agricultural programs and other innovative ways to bring farmers and consumers closer together. The local food movement improves access to healthy, organic food, strengthens the local economy, and improves community relationships.

What is the Local Food Movement?

Only twenty years ago, unless you had a decent sized garden, the local supermarket pretty much had a monopoly on the food industry. You might have been able to choose fruits and vegetables over canned ravioli and Frosted Flakes, but there really wasn’t a whole lot of options for how to get your food. For the first time in decades, the percentage of Americans who considered themselves as farmers began to slowly rise instead of decline. This shift is partly due to the number of young people who have gone back to the land as small, organic farmers.

As more young people have begun farming, and as many city dwellers have become convinced of the need to become educated, aware, and conscientious consumers, the local food movement was born. By connecting people who wanted to make a living from the land with health-conscious consumers who wanted fresh produce not laced with ungodly amounts of pesticides, hormones and other chemicals, the local food movement effectively offered another way for people to get their food.

At the same time, the local food movement has effectively replaced the anonymity of the supermarket with very real, human relationships that have helped to nurture a sense of community. Instead of purchasing a pound of tomatoes with a “Produced in Mexico” sticker from a grocery store where you don’t know the name of any of the employees, the local food movement allows you to purchase tomatoes from a local farmer whose daughter is in the same first-grade class as your son.

The intimacy and proximity that the local food movement fosters have helped to create a new awareness of people who share a common space. At the same time, when the person who produces the food on your table is a member of your community, a neighbor, and a friend, an ethical dimension to your food consumption becomes almost compulsory.

While most people would claim to be outraged by the mistreatment of the Mexican farm workers who worked to produce a part of their dinner, the distance between producer and consumer is simply too great for any ethical connection to be made. In our global economy, it isn’t easy to make the connection between the vine-ripened tomatoes “produced in Mexico” and the Mexican farm laborers who are essentially forced to live in rat-infested camps without access to running water.

The local food movement has been fundamental in helping people to rediscover the obvious (but forgotten) relationship between food and community. It creates a ripple effect that affects our own health and well-being, the economic resilience and viability of our neighbors and local community, and the sustainability of our environment.

Whereas distance and anonymity are the hallmarks of our global, industrialized food system, the local food movement has a number of tools that bring together the invisible farmer and the anonymous consumer. Farmer´s markets are places where farmers can directly commercialize their crops without getting conned by middlemen. Whereas many small farmers suffer from the unpredictable nature of commodity prices, farmer’s markets allow for a stable, local market where they may be able to a fair price for their work.

Similarly, consumers can shake the hand of the person who grew their apples and ask them about how they were grown, what types of chemicals (if any) were used, and other consumer concerns. As people continue to grow increasingly concerned about the health aspects of the food they eat, farmer’s markets are one of the few places where consumers can truly trust the quality of the food they purchase. 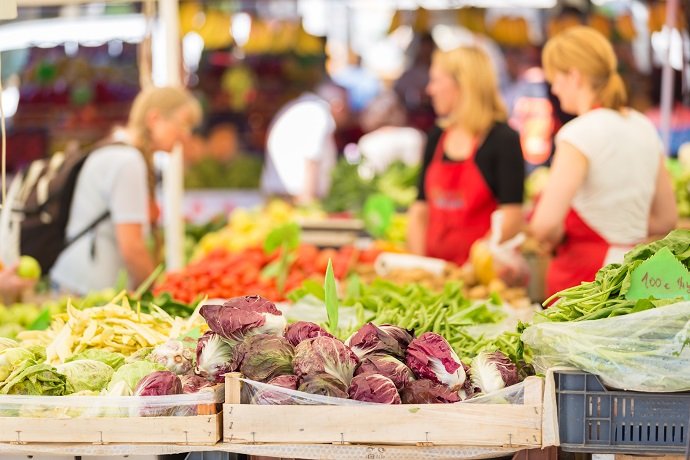 While it is possible to find food that is labeled as organic in the grocery store, many people don’t know that when the United States Department of Agriculture certifies a product as organic, that certification only requires 95% of the ingredients used in the cultivation of that crop to be organic. Over 200 different chemical inputs can still be used in the production of food labeled as organic.

For people looking for 100% organic produce, many farmers who sell at farmer’s markets host “farm days” where their customers are welcome to come to the farm and witness firsthand how the food they purchase is produced. Again, the proximity of local food produced by local farmers allows for consumers to be more directly involved and engaged in the food that makes its way to their dinner table.

Community supported agriculture programs, or CSAs, are another way to bring together producers and consumers. These programs are more structured than farmer’s markets and even further strengthen the connection and relation between producer and consumer. A group of people wanting fresh produce throughout the year purchase “shares” from a farmer and pay an upfront onetime fee which gives them access to a weekly basket of fresh produce from the farm of a local grower.

For an agreed-upon price, the consumer receives a weekly ration of whatever is in season while they effectively subsidize the farmer’s production during the growing season. Since many farmers have a hard time finding credit at local banks to help them finance their crop, community supported agriculture programs help farmers avoid one of the most abhorred parts of farming: dealing with the banks.

Some of the more advanced community supported agriculture programs form coalitions of farmers. Each farmer specializes in producing some sort of food product. Instead of just receiving a simple basked of vegetables as is the case with most CSA programs, the shareholders receive a more complete “shopping cart” full of different types of groceries.

The “Need More Acres” CSA program in Bowling Green, Kentucky offers a full array of foodstuffs to their shareholders. One farmer who runs a dairy provides fresh cheese, yogurt, and milk while another cattle farmer offers a fresh cut of beef every week. Two or three different vegetable farmers provide different sorts of vegetables while a local orchard provides apples and peaches when in season. A local bakery also participates as a providing member of the CSA affording the shareholders a freshly baked loaf of bread made from locally produced wheat.

The Benefits of the Local Food Movement

There are a number of benefits to the local food movement. Fresh food that is organically produced creates access to a needed source of nutrition for many people living in the cities. The University of Texas has even launched a local farmers market as part of a holistic strategy to combat child obesity in the region.

Furthermore, the local food movement allows farmers to directly market their production thus cutting out the middlemen. They may even be able to sell organic produce or niche products at a premium price. By allowing for a fair wage for their labor, small farmers are able to make a decent living from their land.

Lastly, farmer’s markets, community supported agriculture programs, urban agriculture, and other aspects of the local food market strengthen the local economy. By spending locally, the economic resources are recycled back into the community. Of the $100 dollars that people spend at Walmart on groceries, the majority of that money is funneled away from the community into the vacuum of the global economy. The $100 dollars that you spend at your farmer’s market, however, stays directly in your community thus helping the local economy to become more resilient and dynamic.

How to Get Involved in the Local Food Movement

Chances are that there are a number of different farmer’s markets somewhere near where you live. You might even find a newly launched CSA program looking for shareholders to buy into the program. If, however, you are unsure where to start looking, Local Harvest is a website that offers an abundance of information of where to find farmers markets, CSAs, and local farmers in your area.

Has Pollution Taken Over the Earth?