Emma and I have been living as artists-in-residence at a farm — Snaggy Mountain — just north of Asheville for the last month. Snaggy Mountain isn’t necessarily a permaculture site, though there are certain shared commonalities. Jared, the owner/operator, certainly has interest in growing food, and he is no stranger perennial vegetables or the drive towards garden forestry. On our first full day here, he took us on a foraging mission through the forest behind his house, and we have been seriously hooked ever since.

To be completely frank, the premise of foraging has long appealed to me, and at times, harvesting from the gardens Emma and I have worked on hasn’t felt all that different. We are accustomed to setting off on a walk and grabbing leaves here and there to go into salads and soups. However, these leaves have normally been from plants that, though they have a sort of wild lifestyle, we’ve cultivated. Jared’s foraging was much more rustic, and it was something Emma and I have been longing to learn about it.

The thing with foraging wild edibles is that it isn’t always something I necessarily feel comfortable teaching myself. While I can confidently identify lots of plants, I’ve rarely found myself in the circumstance where I had to do so without the reference of a cultivated garden. Jared took us into the forest, and he began pointing out all sorts of stuff, seemingly every third plant, as edible. Without a pencil or notebook on hand, Emma and I did our best to store the information away, choosing favorites to remember.

In the weeks since, we have included wild forage as a daily part of our diet. Here are some of the plants we have grown to love. 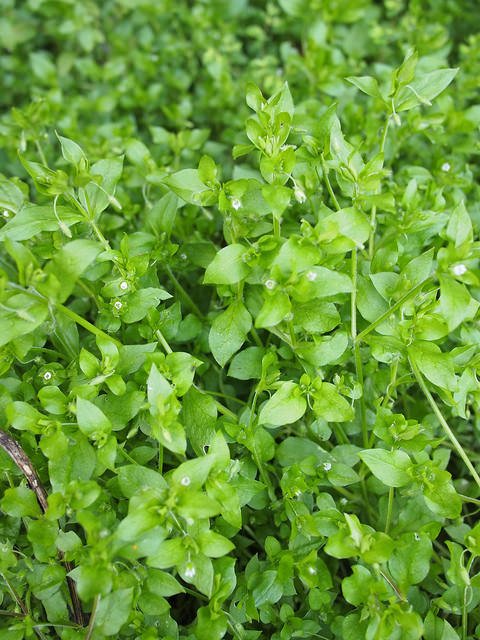 Without a doubt, chickweed became a fast feature in salads and as raw roughage atop soups. In her excitement over our first foraged lunch, Emma spent some time nosing around in wild edibles guidebooks, and she learned that, unlike many wild edibles, chickweed was one that can be eaten regularly without concern. Many of the wild edibles are high in oxalic acid, which prohibits eating them in large quantities. This wasn’t the case with chickweed, and possibly due to that fact, chickweed is also a mild tasting, pleasant green, another detail that is uncharacteristic of many wild edibles. Instead, chickweed was just super healthy, and all varieties of it were safe to eat, unlike many members of the wild umbelliferae (relatives of carrot, parsley, dill) family.

• Some common wild edibles that are high in oxalic acid include amaranth, dock, and purslane, all of which we have eaten. It is also in common crops, such as almonds, bananas, rhubarb, parsley and spinach. In these modern times of food foraging, it almost seems cliché to put dandelion in the conversation, but because we’ve been living in Central America for years now, it is almost like a new plant to us. The heavy clay soils around Snaggy Mountain is teeming with dandelions. We’ve not yet ventured into the roots and flowers, but we have steadily harvested young leaves. The larger leaves are really bitter, but the younger ones work well raw and have spruced up a stir-fry (our thus-far favorite way to have it) or two.

• Dandelion root can be dried and stored. It is claimed to be a replacement for coffee, and though this idea makes it to a lot of list, I’ve heard a few aficionados debunk that rumor rather quickly. Nevertheless, we’ll give it a try for whatever it is. I enjoyed the trout lily, but Emma fell for it in a much larger way. These have been growing throughout forest floors in North Carolina, and the leaves are quite distinctive, somewhat succulent (like purslane) and colored like a fish skin. They are bulbous, perennial plants that bloom in early spring. Though we’ve not seen them in bloom yet, they do have very attractive flowers, which are also edible. Trout lilies grow mainly in the US and Canada, with special appearances in forests of Europe and Asia.

• Though these are really tasty, they are an example of a wild edible that must be taken in moderation. Trout lilies are emetic, meaning that they make you vomit. In Central America, Emma and I became lovers of garlic chives. Like onions, which are relatives of garlic, both members of the allium family, the greens of garlic can be eaten and actually have similar tastes to the bulbs, only milder. They are a great way to include flavor in a salad or as raw herbs on savory dishes. When it comes to wild versions of these plants, Eat the Weeds recommends that if it smells the part, then it is edible, but if it looks the part without smelling like onion or garlic, it might be toxic. Smelly versions are growing in quite a few spots here.

• Another member of the family, ramps (Allium tricoccum) is also very popular around here, and they have taken on the same trendiness as dandelions. They provide a good wallop of nutrition and are delicious. 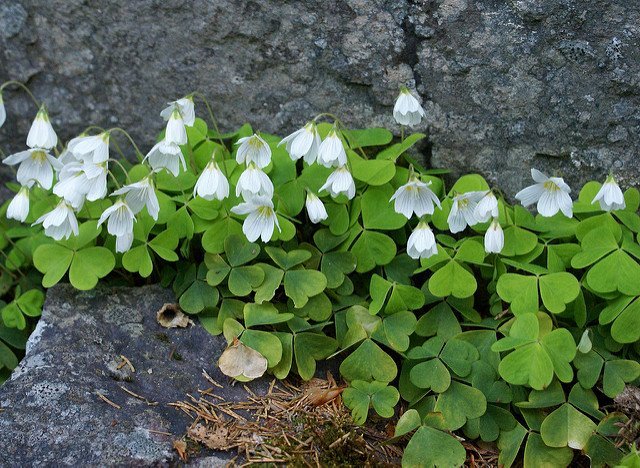 Wood sorrel is another really tasty edible, and it is pretty easy to identify. It looks a lot like clover, but the leaves of wood sorrel—also in groups of three—are heart-shaped. Luckily, all clovers are edible, though not as delicious as the tart sorrel, so even a mistaken identity shouldn’t be problematic. That said, wood sorrel is one of the Oxalis plants, so it can’t be consumed in large quantities.

• While wood sorrel, due to the oxalic acid, should be avoided by people with gout, rheumatism, and kidney stones, it is also recognized for treating scurvy, fevers, soar throats, and more. 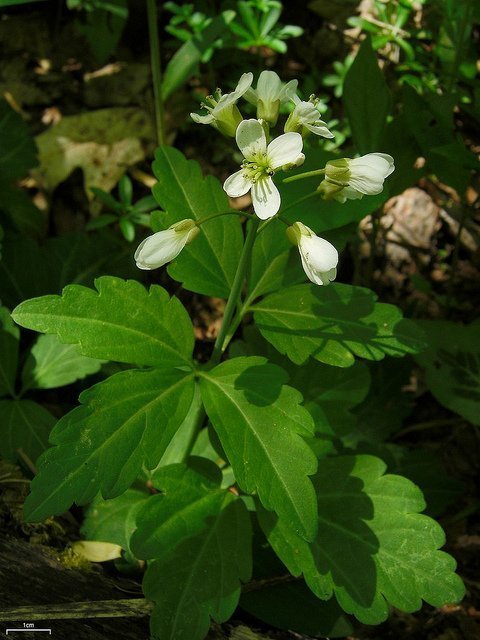 Crinkle root, also known as broadleaf toothwort, was one of my favorites because its leaves taste just like wasabi. Like the wild garlic and onion, this enables adding some serious flavor to salads. It was/is used by many Native Americans as a medicinal plant for treating headaches, colds, sore throats, stomach problems, venereal diseases, and—as the name suggests–toothaches. It, like wasabi, is also made into a condiment by people as well. It’s actually a member of the mustard family.

• There is another wild edible, very closely related to this, called cut-leaved toothwort, and it has many of the same qualities. It seemed to be more recognized in my research, though it is endangered in New Hampshire and Maine. And, there have been many others to note. We have eaten the young leaves of plantain, broadleaf and English. We just missed the morel mushrooms, only witnessing one gigantic sample before the season was declared over. We’ve enjoyed fern fiddleheads in our stir-fries, along with the farm’s asparagus that have been a daily harvest. Apparently, as Jared has mentioned several times, the nettles should now be “popping” in the forest. Pineapple weed, often mistaken for chamomile, is growing just beside the parking area, and supposedly, it only likes gravel driveways. Wild lettuce is “literally everywhere”, and cleaver is climbing up the lattice work of the front porch. We have tried all of these things, spring harvests, but come summertime, there will be more to taste. For us, it’s been an exciting adventure, one that we believe has only just begun.

The Top 5 Reasons You Should Start Composting Right Now