I hear and read many people who are completely against double-digging, and to state this upfront, for those most part, I’m in complete agreement with their assessment. I am a believer in no-dig gardens. Even more so, I think being patient with our soil situations—planting what will grow and piling organic matter atop the soil to replenish the nutrient cycle—works. I’ve seen it work in dry situations, in clay situations, in sandy situations.

In a word, I know that, with a little time and some simple measures, we can reinvigorate the planet, at least the little patches we have some say over. I mention this to establish that I’ve come to double-dig gardens with this mindset: the answers to our fertility woes are not dominating nature but rather collaborating with it. Nature is constantly working to repair its soil problems and stabilize the eco-system, so we don’t need to fight it but simply better enable it.

However, it is worth noting that some of our garden beds, even in a permaculture system, are not exactly the way nature would do it. Kitchen gardens are intensively managed areas in which we often ask more of the soil than natural systems would. Few of us are living primarily off of perennial crops, so we must accept that annuals will feature somewhere, to some degree, in our self-sustaining cultivation plans. That will likely mean amending soil in organic, yes, but still unnatural ways.

The Issues with Double-Digging

Video: How to Make a No-Dig Garden

Double-digging has several things that people object to. That begins, of course, with digging at all. It’s becoming more and more widely accepted that digging and/or tilling in the garden is not a long-term plan for food production. Digging destroys the soil life, which at first works to the gardener’s advantage as the corpses and such decompose, but the ultimate outcome is that, with no soil life remaining, all of the benefits those organisms naturally provide—aeration, fertilization, decomposition, etc.—are increasingly missing.

Another topic commonly brought up with double-digging, as with tilling, is that it mixes subsoil with topsoil, creating a less nutrient-rich growing medium. Root systems, in principle, are meant to work with the natural layering of soil, where leaf litter covers humus atop soil that has buried the subsoil. The shallow thin roots spread outwards to collect as much nutrients as possible, while fewer, thicker, deeper roots mine minerals from the subsoil. Mixing this all up isn’t in tune with how roots actually function.

There are more considerations. When we dig, we loosen soil, and loose soil sinks ecosystems because it is much more susceptible to erosion by wind and water. When we dig we unearth seeds that have been waiting for a chance to become weeds, while these weeds, left alone, would slowly rebuild the soil and system, they usually aren’t our goal in creating garden beds. When we dig, we release carbon into the atmosphere, while our planetary goal should be more geared towards sequestering it in plant life.

All of this and it’s extremely labor-intensive.

In Bed with Double-Dig Devil’s Advocate

Not entirely to flip-flop, but a carefully constructed double-dig bed does address some of the claims brought against it. Done well, soil layers remain or are recreated as they should be: subsoil, soil, humus, and organic litter. Done well, the risk of erosion is dramatically decreased, and the topsoil—presumably depleted—is revived with nutrients, even life. Done well, weeds are suppressed, and drainage or water absorbtion is increased. The method doesn’t necessarily equate to complete destruction.

Sometimes, one might say, double-dig beds are useful. When soil is completely compacted, void of plants, and lacking in fertility; when the space is near the house and to be heavily managed by humans anyway for intensive food production, zone one food production; could double-dig beds not be a viable method? Certainly, it’s not the only method, but must we demonize it so? Can we not imagine it as something that might actually function well and sustainably in the right hands?

• If we take only the topsoil out, not mixing soil layers, and aerate the subsoil with a fork, never turning it, have we not maintained some soil life while instantaneously aerating and possible amending the—presumably depleted—topsoil, including inoculating it with new soil life to account any destroyed by digging.

• Wouldn’t this quickly deal with compaction issues in areas—Zone 1—where we are meant to first begin cultivation, and doing so in abundance, allowing us to then concentrate on building our long-term sustainable system atop something that can produce now rather than in six months?

• If we then, cover our double-dig beds—as we should—with a layer of humus or humus-like compost, mulching over that with organic litter, have we not in fact rebuilt the soil layers as they would ideally be, only with drainage, erosion, and aeration issues more immediately addressed?

• In the case of labor, might we also say that, in some circumstance, small gardens in largely urban areas, gathering the materials required to sheet mulch or utilize other no-dig methods, which are resource-intensive, could require more work than double-digging and using less organic material for the top two layers only?

Truth be known, double-digging beds has not been something I’ve often utilized or something I often see as the best option, but I also think—in permaculture—we are to examine and analyze methods for what they are: tools we can utilize. We don’t have to use the same technique every time in every situation. In fact, permaculture teaches us not to do so, that our job is to find the right solution for each individual set of circumstances. With that in mind, it seems a bit pious (in the devoted no-dig sense) to claim double-digging should never be a viable option.

I like to think that, by and large, while many certainly wouldn’t adopt the technique, the overall objection to double-dig beds is to the notion of repeating the process again and again, a la annually tilling a garden. In this case, I would have to agree that double-digging does have a destructive, unsustainable element to it. However, if we are digging then fostering the soil life to blossom, afterwards feeding it undisturbed from the top with leaf litter from perennial plants, as naturally happens, in this case, have we really done something so different than digging a swale or building a sheet-mulch bed on hardpan?

The wider issue here, for me, is that sometimes I feel certain techniques and terminology come with a fingers-in-the-ears approach from their practitioners, such as with composting, and on the whole, that warrants a little worry. Some would suggest double-digging as a worthwhile consideration in certain instances. That’s not to say the buck stops here, but experienced voices—even of those not doing things exactly as we might—are worthy of paying attention to. And, in much the same way, double-digging seems an instrument that sometimes strikes the right note.

While I know the damning comments are likely to follow below, regardless, I’d again like to remind that this was not an argument that all gardeners in all places should use double-digging all the time but rather recognition that there may be a place for it for some gardeners at some time.

Hugel Swales May be a Bad Idea 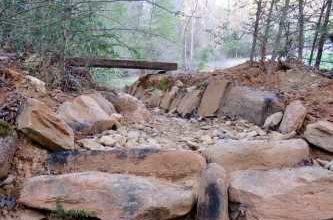 December 7, 2018
PRI Newsletter
Get the latest permaculture news stories straight in your inbox