We have planted a fair bit of Japanese Quince – Chaenomeles speciosa in our gardens over the years, all of them grown successfully from seed. Initially I was disappointed by the rock hard, sour fruits that arrived in the fourth year after sowing, but have always had an appreciation for the profuse beautiful reddish pink flowers that appear in the early spring attracting bees and other pollinators. These days I’ve extended my appreciation to the fruits as well, and as a tribute I am dedicating a post to this special plant.

The fruits are generally extremely hard, however following a cold spell I found the Japanese Quince softened enough to squeeze like a lemon, and the juice being very acidic made them an excellent alternative to lemon juice. It has been reported that 100g of Chaenomeles juice contains 124-182 mg of vitamin C, while 100g of lemon contains rather less, typically within a range of 40-70 mg. The fruit juice also contains the elements potassium, magnesium, iron, copper, zinc, sodium, calcium, and is rich in fruit acids so I’ve been enjoying starting the day with a shot of freshly squeezed quince juice :)

Another plus for this fruit is that the hard fruits picked in Sep/October have a delicious and somewhat addictive aroma that lingers around for a few days resembling that of pineapples, lemons and vanilla. I leave the fruits in the car or around a room to act as a natural air freshener.

So here’s some more details on these fascinating plants including how to grow them, different cultivars, using them in polycultures (for which they’re great!) and more.

Description – A thorny deciduous or semi-evergreen shrub native to eastern Asia, usually growing to about 2 m tall and generally exhibiting a rounded outline, but is somewhat variable in form. The plants establish a very dense crown with a tangled jumble of branches which are either spiny or with spurs. The flowers come before the leaves and are usually red, but may be white or pink. The fruit is fragrant and looks similar to a small apple although some cultivars have much larger pearish shaped fruits. The leaves do not change colour in the autumn.

Biodiversity – The flowers are attractive to a wide range of pollen and nectar feeding invertebrates from March- April, sometimes in February. The shrubs form compact and virtually impenetrable hedges. They are perfect territory for sheltering bird nests and the homes of other small wildlife.

Pollination – The flowers are hermaphrodite (have both male and female organs) and are pollinated by bees. Propagation – Seed – These plants are easy to grow from seed. The seed can be sown inside late January – early February and should germinate within 30 days. We sow in trays with a 50% sieved compost 50% river sand mix. The seedlings should be pricked out and moved into deep pots or a seedling bed when large enough to handle. The largest plants can be planted out in their permanent positions in the summer. Smaller plants should spend their first winter under cover and can be planted out the following spring. When given water during dry periods and a little protection from encroaching weeds the plants establish very quickly (we have seed available for delivery see here).

Propagation – Basal Cuttings – You can cut away pieces of stems from the base that have some root tissue and plant these in deep pots. The following year the pieces will have developed a reasonable root system and can be planted out in their permanent position. Layering also works well for this plant.

Location – The plant tolerates full shade but requires a sunny position for best fruit production. Consider ease of access around the plants as the branches are thorny. They are not so easy to move if you plant them in the wrong place because the root system is very deep and when moving a plant, root pieces left in the ground will often grow back. The plants suckers from the base and spreads over time but they don’t appear to be competitive with surrounding plants making them ideal for polyculture planting (more on this below).

Soil – The plant is easily cultivated in any reasonably good soil and can grow well in heavy clay soils. Like most plants, they prefer a deep moist well-drained loam. In our experience they can tolerate waterlogged soils but probably not for entire seasons. Avoid high pH soil (alkaline) which will result in chlorosis.

Fertility – The plants do not need feeding, but if planting with other fruiting shrubs and under fruit trees a top dressing of compost applied in the early spring will be beneficial and likely to encourage better fruit production.

Irrigation – They are considerably drought tolerant, but if you would like high yields then irrigation during periods of drought is recommended.

Trimming – Trimming the shrubs can keep them compact and encourage dense multi- stemmed growth. The trimmings can be used for mulch and for rabbit food.

Suckering: When trimmed the plants tend to send up many new shoots from the base and can spread slowly outwards. This may be a problem if you are planting in a crowded bed.

Insect/Pest: Scale, mites and aphids can be problematic, but we have not experienced this personally.

Disease: Apple scab can cause significant defoliation by mid-summer. Susceptible to fungal leaf spot (particularly in years with heavy spring rainfall) which can cause considerable leaf defoliation. Fire blight and scab can be problems in some areas.

Fruits – Fruit eaten raw or cooked. Fruit exposed to cold temperature softens and can be used in the place of lemons. Fruits contain high levels of pectin and are used for jam making. In Japan they mix quinces, sugar, and alcohol to make a liquor. While researching the plant for this post I also came across what looks likes a fabulous recipe. Place the quince in jars and fill with honey, boil the jars and you have quince infused honey/syrup. 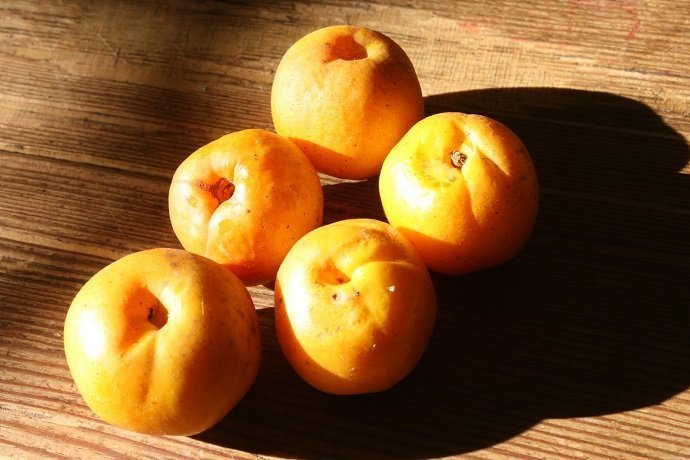 Twigs and Leaves – Can be used as rabbit food. We also feed some of the less perfect fruits to the rabbits who seem to enjoy them.

Hedging – The plants take well to trimming and can be used to form a hedge. Annual trimming does not drastically reduce flowering or fruit formation.

Bee Plant – Flowering in early March, it provides a early source of nectar/pollen to bees. The flowering period can last up to 3 weeks.

Medicinal uses – Japanese quince has three primary medicinal uses. The first is as an anti-inflammatory in joint and muscle problems; the second is to treat and cure seasonal respiratory illness; the third is as a general tonic to stimulate health or recovery from illness. For more on the health benefits take a look here .

Other uses – It’s actually not a bad producer of biomass and can be trimmed up to 3 times a year once established. The thorns make it uncomfortable to handle but it’s okay for mulching perennial beds. It would be interesting to experiment with how hard the plant can be pruned and how fast it comes back.

The plants we grew from seed are very variable in the size of the fruits and the quantity of fruit produced. I’d estimate that they are producing from 1-3 kg of fruit per shrub. They are not full size yet. A thorn less Chaenomeles spp. cultivar developed in Lativa called ‘Rasa’ is repotered to have produced a total 21.9 kg/bush in 5 years, i.e, 6 kg per year per bush.

Growing well in partial shade, the plants can be grown in the under story of larger fruit trees. We have them planted on swales approximately 1m apart with blackcurrants and aronia placed in between. All these plants are growing beneath two cherry plum trees (thinned down from four originally). We have also planted chives and tree onions around these plants.

This plant features in many of our polycultures including our early pollenizer guild (coming soon), living fences, and support islands around the vegetables where we grow the plant with Ribes nigrum, Allium schoenoprasum, Rudbeckia laciniata and Primula vulgaris ground cover.

All of these plants are available from our Bionursery and can be delivered to anywhere in Europe.

Many cultivars exist, some of which do not provide fruit and are used for ornamental purposes. Here is a list of a few:

‘Contorta’ – This form, with twisted stems and white flowers, is appearing more frequently in the trade. The contorted branches can be showy in the winter landscape.

‘Texas Scarlet’ – A low-growing plant (to 1m tall) with few thorns. Blooms are bright red, considered among the best. The apple-like fruit may also be used for culinary purposes.

‘Toyo-Nishiki’ – An unusual form with red, pink and white flowers in the same flower cluster. Upright, rounded habit with spiny branches (growing 2 – 3 m tall). While the flowering habit is unusual and the plant is very hardy, some reports indicate that it may be more prone to fireblight disease.

Balkan Ecology Project is a family run project – Paul, Sophie, their two boys Dylan and Archie. They moved to Bulgaria from the UK in 2005, before which Paul worked as an arborist, running a tree care business in the suburbs of South London and Sophie worked as a registered nurse. Inspired by the widespread practice locally grown food and the incredible biodiversity of Bulgaria they co-founded Permaship and started to develop productive ecological gardens and education programs.

In 2010 they founded the Balkan Ecology Project the goal being to reach a wider audience by providing tried and tested models of food production that yield quality produce, promote ecosystem heath, and can be replicated easily in terms of the skills required to run them and the financial investment needed to start up.

More articles from Paul Alfrey and the Balkan Ecology Project