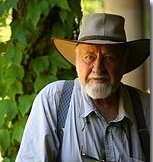 We cannot describe here all of the many ways in which Bill influenced the world, or the many different hats he wore during his rich and adventurous life, but, to close 2016, there is one more that we would like to highlight: Time scout.

What is a time scout? It is, in many ways, what Bill devoted his life to becoming. In his autobiography Travels in Dreams,

When we design, we are always building for future floods, future fires, future droughts, and planting a tree a few inches tall that will be future forest giants, throw future shadows. Future populations will need future soils and forest resources, shelter, security. So somebody needs to range ahead in time, scout out the next century. We are not daydreaming. We are time scouts.

These few lines can’t capture the entirety of a man like Bill Mollison, but they do perhaps give us a glimpse of the essence of who he was, what he believed, and how he chose to live his life. In this passage, he is describing one of the priorities of permaculture — a movement that Bill helped to found.

Permaculture is a portmanteau that fuses the words “permanent” and “agriculture.” Here, permanent does not refer to something monolithically unchanging, but rather something that can evolve and grow and adapt with changes in the environment to continue to sustain those that nurture it. It is not the opposite of ephemeral, but rather the opposite of disposable. Where industrialized agriculture and lifestyles draw what resources they can and move on, disposing of the now-depleted land behind them without a second thought, permaculture design looks to emulate the cyclical, replenishing processes of nature. Nothing in nature is “disposable” — it goes on to serve some new purpose, to give back.

Throughout his life and many different career and academic experiences, Bill has always sought out opportunities to transform the act of taking into one of giving. This philosophy is one which has been at the forefront of many of his actions, as when he participated in helping Aboriginal communities raise money for education through the sale of wallaby skins.

Bill’s life was not one which was tidy — and he himself would have agreed. He told Glenn Mulcaster, a writer for the The Age, that there should be awards for untidy towns. It isn’t litter and mess that Bill reveres. Instead, it’s the desire to roll up one’s sleeves and participate in life itself and to take responsibility for life itself, rather than relegate these roles and responsibilities to faceless corporations. A tidy façade that hides the poisoning and depletion of the planet is far uglier than growing beans on one’s front lawn — and doing so is, in Bill’s opinion, one of the best ways to address the growing obsession with false tidiness.

Permaculture, for Bill, was also more than the “beneficial assembly of plants and animals in relation to human settlements.” It was also a manifestation of his desire to improve the world with positive actions, rather than opposition. His experiences as a scientist with CSIRO and the Tasmanian Inland Fisheries Department solidified his conviction that our current way of life was unsustainable, “killing us and the world around us, ” and at first, he chose protest as a way to combat these practices.

But protest did not result in success, not in changing the industrial and political systems, nor in satisfying his need to feel that his contributions were meaningful. Two years later, the principles of permaculture began to emerge in his mind. It was the answer to his sincere goal to not “oppose anything ever again and waste time. I wanted to come back only with something very positive, something that would allow us all to exist without the wholesale collapse of biological systems.”

His permaculture ideals drew on his rich and varied life experiences. In 1959, he looked around him at the abundant life in the Tasmanian rain forests, “inspired and awed by the interconnectedness of this ecosystem.” The seed was planted — could human beings look to complex, abundant, and self-sustaining ecosystems for a way to nurture both themselves and the environment?

Bill devoted a great deal of his life to making sure that the answer to that question was “Yes.” His writings on permaculture, including Permaculture One and Two, Permaculture—A Designer’s Manual, and Introduction to Permaculture, among others, have educated and informed an entire generation. A generation which is now teaching its own children that the human way of life need not to be simply taking and taking from our environment, but living in harmony with it. There are now many organizations dedicated to teaching the very permaculture ideals that Bill began to formulate over half a century ago. Permaculture Institutes around the world have taught hundreds of thousands of people new ways to live in an abundant, sustainable environment.

He was always generous with his knowledge, and indeed, with himself. When asked if he was going to patent an apartment gardening method he developed in Sweden, Bill said “Oh, that’s ridiculous. You want to give it away and teach it so that every Swede is happy in their room.” And note his language—not “you must give it away,” not “you should give it away,” but “you want to give it away.” Any other thought process would have been alien to Bill. He said everyone “should do something to help themselves and others,” just as every element in permaculture design gives as much as it takes.

Bill lived his life as an adventurer, a traveller, a fisherman, a scientist, a lecturer, a farmer, and much more than that. His life did not, perhaps, take the most traditional path — or at least, not the one we’ve been conditioned to believe is traditional. In a 2001 interview with Scott Vlaun for Seeds of Change, Bill says, “I saw that Nature never has a single system. It never just grows pines or just grows anything, really.” Bill was not a man to just grow one idea, to just learn one way of living, any more than Nature tends gardens of just one type of tree. He embraced mistakes, seeing them as learning opportunities, believing that self-awareness and awareness of our surroundings could help us say “Look, I want to get to where I was going, but this way is not the way. I’ll try another way.”

Bill Mollison didn’t just describe ideals. He lived them, and in many cases, embodied them. He tried another way, and another way, and another—and in doing so, provided us all with a way to embrace and sustain ourselves and the earth. He described permaculture as a system of design in which “everything you put in had a multiple purpose and was in the right place to carry out its job.” Thankfully, for each and every one of us, for each and every life he and his teachings have touched, Bill Mollison was in the right place to carry out his job.

But we should also remember that, for a man who understood so much about the complexities of Nature and its cycles, for a man who was always “always building for future floods, future fires, future droughts, and planting a tree a few inches tall that will be future forest giants, throw future shadows” that while we close 2016 without him, he has not truly left us.

He devoted himself to a future he likely would not see, but that was not his concern. His concern was to help us and our children, and our children’s children to get there. Why? Because that is the job of a time scout, and Bill Mollison was nothing less.

Thank you, Bill, for all that you’ve given — the future shadows you throw will be long indeed.