(a) Abnormal soils: These soils are poorly developed and cannot be properly classified into layers. Their poor development is owed to erosion and very steep slopes in hilly or mountainous regions.

(b) Transitional soils: These soils are more developed than azonal soils. Their formation is controlled by local factors such as parent material and topography .

(c) Zonal soils: These are well developed and found over a wide range; formation is influenced by climate and vegetation.

Dokuchaev’s system of classification was well suited to the soils in the Russian climate but was not broad enough to include soils in other regions of the world with more climatic, topographic and historical variations 1. 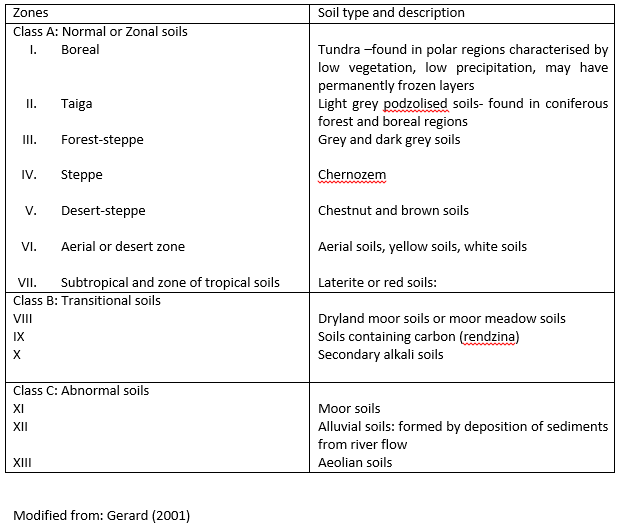 The FAO Soil Classification System is more generalized and covers various soil types worldwide. Soils are grouped based on their conditioning factors (listed below) 2. This article will discuss briefly some of this soil types, listing their identified characteristics by the FAO.

For an exhaustive description of all soil types and their dominant regions on the world map please visit https://www.fao.org/soils-portal.

Ferralsols: Classified as oxisols in the USDA classification are dominant in tropical regions (example: tropical rain forest in South America (Brazil) and Africa (Angola, Madagascar). These soils have red to yellowish coloration because of their high content of iron and aluminium. Ferralsols cover an estimated 750 million hectares of the world land mass. They are naturally low in fertility but can be used for crop production if improved on.

Andosols: Classified as andisols in the USDA classification. They are dark coloured soils mainly formed from volcanic ash. These soils are highly fertile because of their high quantity of unweathered minerals. Common crops grown on andosols are coffee, tobacco and maize. Andosols are found in volcanic regions of Chile, Ecuado, Columbia, Hawaii and Fiji.

Arenosols: Are sandy soils, occurring throughout the world in arid, humid, hot or cold climates. Parent material contains quartz a mineral highly resistant to weathering. They are found in large areas of Africa, the Middle East, West and Central Australia. Arenosols are used for grazing of livestock. In arid regions soils will require irrigation before cropping. They cover an estimated 900 million hectares of the global land mass.

Cambisols: Are new soils just starting to form. Soil texture is usually loamy or clayey. They are highly fertile as they still have large mineral composition. They are also very good for agriculture practice such as grazing and crop production. Cambisols are found in arid (sub) tropics, in cool regions and in humid tropics. They cover about 1.5 billion hectares of the world landmass.

Histosols: Are soils high in organic matter content, commonly found in environments conducive for minimal decomposition of organic matter. In wet and cold climates, decomposition of organic plant and animal residue by micro organism is minimal. The result is the accumulation of organic matter. Histosols are sometimes called peat or muck soils. In many European countries like Ireland, Scotland, and Finland peat is used for heating homes in winter. It is also used as horticultural compost and to power fuel stations. Histosols are dominant in the temperate and boreal climates, and on poorly drained soils.

Fluvisols: Are young soils that cover an estimated 350 million hectare of land mass worldwide. They are formed from a deposition of marine sediments and found in flooded areas and alluvial plains of the world. Fluvisols can be used for crop production if the soil is drained.

Podzols: Are called spodosols in the USDA classification. Podzols are found in the northern hemisphere, in the temperate and boreal regions. They cover about 485 million hectares of total land mass. They have a wood ash appearance. Podzols are formed from weathered siliceous rocks. Common vegetation includes coniferous trees and heather. These soils have high acidity, high aluminium content and low fertility. Their low fertility makes them not desirable for cropping.

Calcisols: These soils have high calcium content. They are found in arid and semi-arid regions. Vegetation is limited to xerophytic trees, shrubs and short-lived grasses. These soils are dry, highly calcified and unfavourable for cropping. However, crops can be grown with proper irrigation, fertilization and desalinization. Calcisols are estimated to cover 1 billion hectare of the world land mass.