As Geoff Lawton said in one of his videos, “If there is no permaculture group where you live, then start one”. After six months of moving to Stanthorpe in Southeast Queensland to start our permaculture life on a rural block, we did start a group. This was in January 2014. We pay an annual fee of $60 to the nearest Landcare group/office to be added to the groups under their umbrella which includes their insurance coverage. 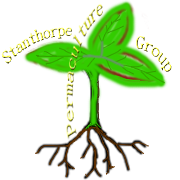 By that stage we had met some fellow permies and other people who showed interest in Permaculture. Some of this interest was generated by holding an open day at our property and having a tour around (of course it was in its early stages). We shortly thereafter started arranging monthly gatherings, usually at someone’s place and usually with some practical aspect to it. Examples of the events include making a multi-purpose mobile hoop, permablitz, wicking bath, solar oven, keyhole veggie garden, hugelkultur, earthship building, fruit tree grafting, rocket stove build, mushroom logs, solar cooker, and so on. After declining attendance (some reasons; other commitment(s) on the event day, not interested, not aware of event, forgetting), we changed tactics and tried to offer more formal workshops like beekeeping, wine making, grow your own food, in addition to a couple of documentary nights. There were some improvements in attendance and demand, but not the oversubscription one would expect from such good value for money offerings (almost free!). Slowly, slowly we have discovered and accepted this and so far have not done any paid advertising, although recently a new newspaper reporter did preview our most recent Talk.

We also organised and taught most of a PDC in 2014 at the Community Garden, but only used local guest presenters (all but one are PDC graduates). This 14 sundays format attracted 13 students of which nine completed it entirely. We have also recently held two ‘Introduction to Permaculture’ one-day talks in an effort to generate support for another PDC or just to grow the group.

Using the group as a non-business platform (avoiding the bureaucracy, expense, etc in having a business) to hold these localised, very low cost courses has enabled us to share what we know (People care) and to share expertise by local farmers, beekeepers, winemakers, and the like. We do not like the ‘get an expert’ ‘from far away’ to come and deliver an event model (permaculture should be leading the world, by example, away from this costly method). Doesn’t fit the ethics well enough for us and we believe there is more to be gained from locals because they are local! i.e. they know the climate, soils, and a network of people in our area that an ‘outsider’ usually does not. We make one, and perhaps now a second concession to this.

One is helpers that we have come and worked (WWOOF) with us. They are often from overseas (but normally they are relatively new to Permaculture), and we try one at a time to influence them positively with our interpretation of the Permaculture ethics and way of life. Hopefully they will discover their life path soon and then stop travelling so much when they ‘put down some roots’.

The second concession is for a workshop we have just organised where a local builder and CalEarth graduate will lead a six-day intensive Superadobe workshop. Because this is six days and his time is not pro bono, we envisage that the 6 to 10 places will not likely be filled by locals only (who may not be able to take time off work, or afford it, etc). We will however do our best to mitigate their travel cost by encouraging use of public transport (buses and trains), facilitating all possible ride share options, and inviting people to stay longer or to visit other worthwhile projects on their way here and back i.e. making the absolute most out of the ‘travel cost’ to the Earth. 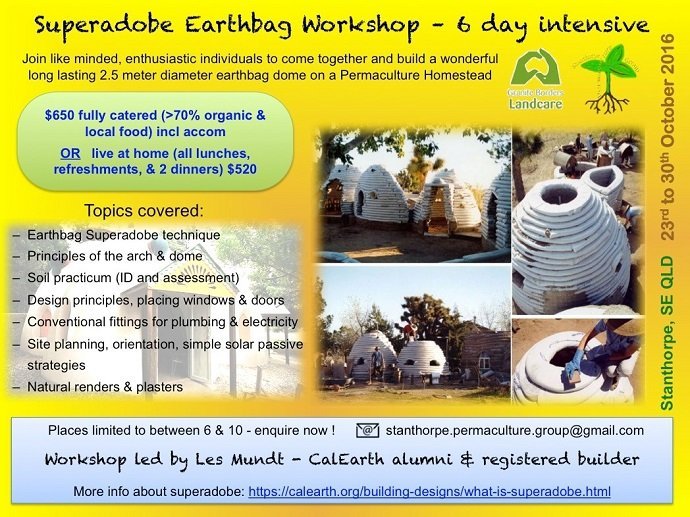 Our model for the Permaculture Group is perhaps a little unorthodox – there is no committee who meet, no bank account, no formalised status, and so on. While we have not been immensely successful, we are slowly becoming known, and because we are not trying to make money out of Permaculture, we are able to access some excellent local presenters who are usually happy to give their time because they care for others. This building of community will hopefully continue and eventually flourish. We can apply for grants through the landcare office (acting as a sponsor) and accepting, distributing the funds allocated, but so far haven’t been successful (still learning). Has anyone out there ever been successful in gaining a grant to hold a PDC or other permaculture related courses that benefit the local community? If so, please share your experience.

Disclosures: I do offer design/ consultancy for payment on our personal website. Again, I do not want this to be a business, just a hobby that earns something reasonable for my expenses and the time I put into trying to learn as much as I can about Permaculture. Fundamentally, I want to help people manage their stewardship of the land. We earn enough to live on by working part time. Our aim is to spend very little annually so we can work in this way.

About defining/using the word ‘local’; in the local food sovereignty movement, local food seems to be deemed within 250km (this doubles with return transport). I believe this is large, although it’s common for supermarket produce to travel 800km to get here and of course there is so much from overseas too. For the group, I’m talking about above; it’s less than 65km (usually 20km for most people), but potentially up to 130km to include another small city. I do however hope there is someone in or who lives nearer us and can do these kinds of sharing in that city instead of us. Otherwise, we would prefer to travel there to present to a group there instead of multiple people travelling up to us. Our Superadobe instructor is 55km from us a fantastic sharing opportunity that doesn’t burden the Earth too much! Perhaps Permaculture needs more localisation and less practitioners flying around and less miles being driven? Let’s set the best example to the mainstream that we can. 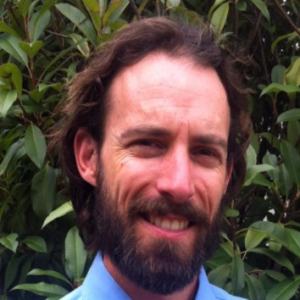 Dylan Graves got hooked on Permaculture while living abroad in Taipei in the late 2000s. He integrated it into his IT teaching and then changed lifestyles by moving to rural Australia in mid 2013 where he and partner Evita continue to develop Sugarloaf Permaculture. Our homestead where we put all aspects of Permaculture into action, including hosting work exchangers, running a Permaculture Group, and doing much volunteer work.

Creating the Mainframe Design for our Farm