This article is about how we figured out our mainframe design for roads, swales and ponds/dams. The pictures that show how those were installed you can see in an earlier article here.

Because the terrain of our farm was totally overgrown and the topography is a bit complicated, it took us two years to finalize this mainframe design. This process has taught us a few good lessons which I will mention as a possible help for people working on their own design.

In the picture below you can get an impression of our land. Most of our terrain is quite steep, with slopes ranging from 1:3 to 1:1. Only the central part is semi flat, with slopes varying between 1:8 and 1:3. The dotted line is the border of the property. This picture above was taken last week, so some structures are visible on it that were not there when we started. Back then it was all overgrown, either with weeds or with bushes and regrowth forest. Some parts you could hardly get through. 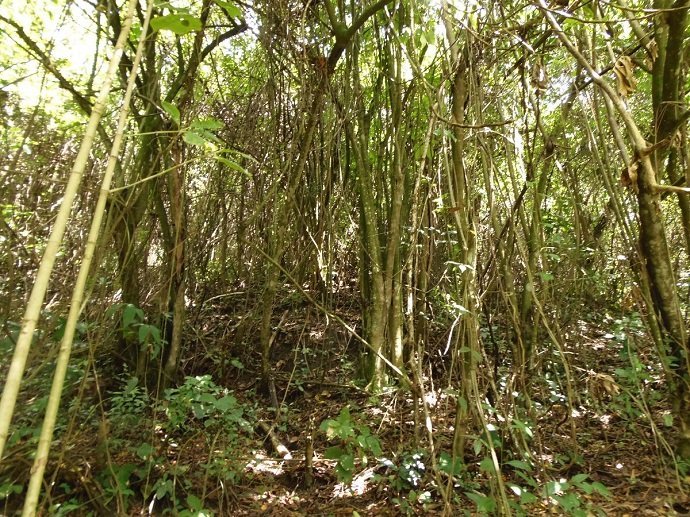 Figure 1 below shows our initial impressions before we decided to buy this farm, projected on a satellite image of 2014, the year we started our work here. If it looks like a wordcloud in a jungle to you then you have about the same impression we had back then. 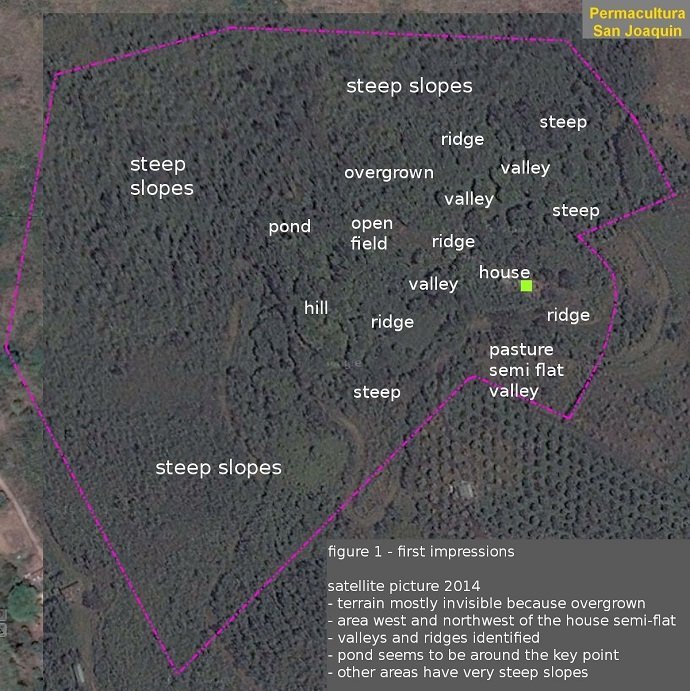 One of the main reasons to choose this farm was the public road that meanders through it. It provides access to the land on a few important spots and with so much road we’re guaranteed to get a decent amount of runoff water when it rains. Another reason was the location right under the top of the mountain. This limits risks of flooding, which can be an issue in our wet-dry tropical climate. The altitude of the farm goes from about 1150 meters above sea level in the most eastern corner to about 1250 meters on the west side. The horizontal distance between the highest side and the lowest point is about 450 meters.

The picture below is our first attempt at making a map. It has ‘guestimated’ 10 meter contour lines, a first identification of key points, where the steep slope above changes into the semi flat area in the middle, and it indicates the flow of runoff water during the heavy rains we experienced in the first months. 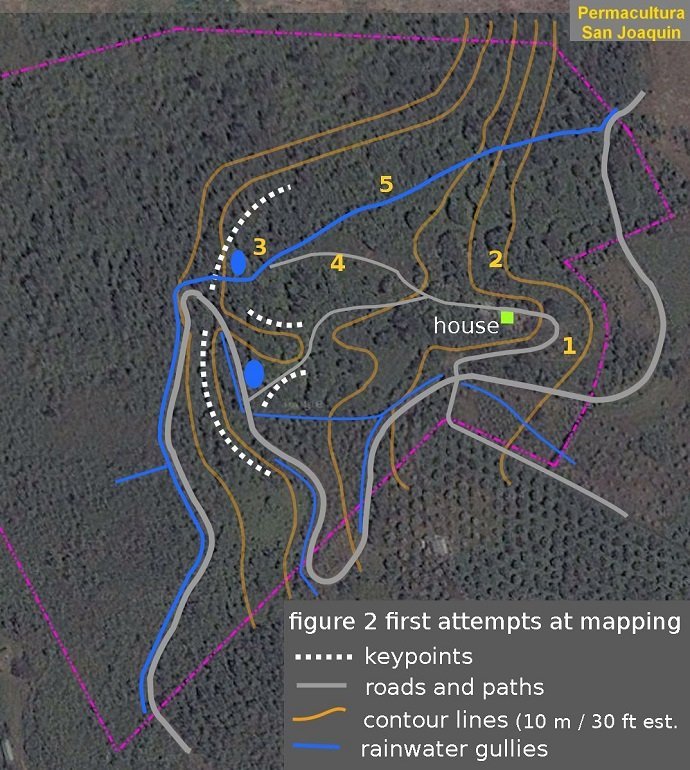 The numbers describe the order in which we tried implementing infrastructure on the land. We started at #1, close to the house, in an open area, which was grazed off by cows of the previous owner. Here we learned our first lessons by failure. This area is the steep end of the ridge the existing house is on. It being relatively bare after the cows were taken off, means it was open to wind and full sun. When the dry season hit we could not keep it properly irrigated, the soil was in pretty poor condition and maybe the worst was that horrible steep climb to get back to the house. We learned not to underestimate our climate, not to start with what maybe is the worst part of our land just because it’s close to the existing infrastructure and most certainly to be way more careful with regards to the energy you waste when trying to work on steep slopes. We were now also sure the location of the house was badly chosen by whoever built it, probably only because of the view from the top of the ridge. The house is just too far away from the more usable parts of the land.

So next during the hot months we started with a swale at #2, to test how that would work out. At the same time we started clearing around the key point at #3 to figure out if we could improve on our water catchment. The runoff during the rainy season was way bigger than what the existing little pond could store. At #4 we identified a relatively flat piece of land we could use for a new attempt to make a garden. The area at #5 looked interesting but still needed to be cleared out and access to it was quite difficult..

Now we had somewhat of an overview, we could start planning the mainframe patterns of access and water flows, following the design principle ‘plan from pattern to detail’. The picture below is the satellite image photographed in August 2015, after most of the work was done, with better estimated 5 meter contour lines added to it. I use this picture as backdrop to explain the steps we took, because it shows what we were working to achieve. This was also lesson number 2: always make sure you have a good understanding of your terrain (map it, it helps your understanding) and your climate before you make an attempt at designing a property. 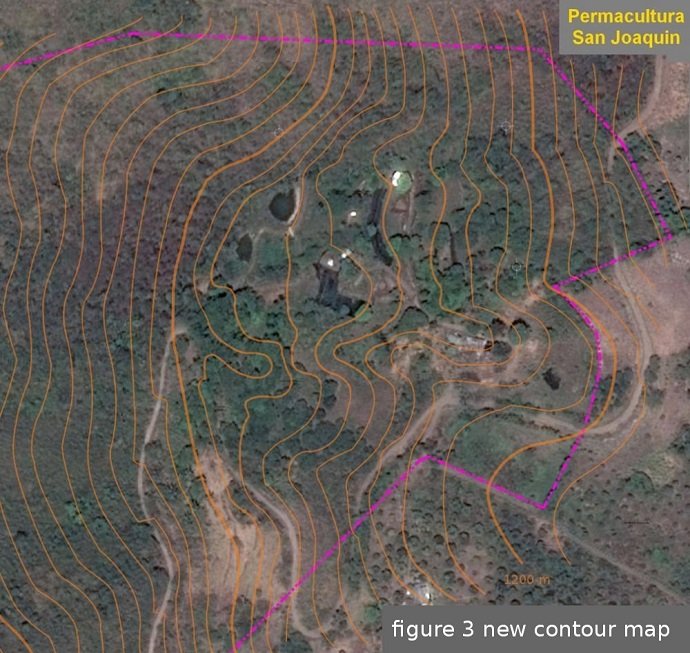 (For anybody wondering what the L shaped black shadow in the middle is, that is an area covered by shade cloth where we had our test garden, #4 in image 2.)

We started our earthworks on one of the key points, because at least we were sure we needed work to be done there. We already had a runoff water flow to the small key point dam, we just needed to turn it into a bigger connected system. Placing the dams here means we have our irrigation reservoir right above the most usable part of the land. We put in a mud pond (A) to loose most of the sediment the runoff water brings with it, let it overflow in the small key point dam (B), which then overflows into the big key point dam (C). In wetter years there will be more water than we can keep in these dams, so we had to think where we wanted that to go. We could have used the existing gully, but that would mean most of that water would simply go downhill to be lost. So instead we decided to dig a big swale (D), to bring the water sideways on contour to a valley in the middle of the farm. This swale, positioned above the land we want to make productive, is a helpful water infiltration feature that over time should help hydrate the ground. At that time we assumed we’d create a valley dam at the end of the swale later. At the low end of the usable terrain we dug another swale (E), which is the final barrier before any water flows down to the sink at the bottom of the farm. With all the obvious work now done, we had to think about improving the area. The main driver for us was access. We needed a level road as easy access from the existing house (and the main entrance to the farm) all the way to the end of the usable terrain. We also wanted a road going up from the house, but less steep than the existing footpath. So we turned a little valley into a valley dam (F), with the dam wall providing us with access to a gentle sloped part all the way at the end of the semi flat area. A road now connects this area to the house (H). The new road going up uses a ridge in the landscape. The ridge dam (G) in the ‘inside’ of that road curving up was simply an extra feature we could not resist installing. The swales at (I) overflow into the gully to the valley dam and excess water from the swales at (J) also flow to the valley dam.

The design for the last stage of our work on this area tries to fill in open spaces and missing connections. We also reflected on our experience so far to determine if any more features were needed.

The key point dams catch quite a bit of water already, but when we went through a severe drought last year because of El Niño we learned we needed more catchment capacity, and ideally we should place that catchment as high as possible. Next to the two key point dams we have a location for a dam (K) which can be as big as (or slightly bigger than) the existing big dam. The mud pond works quite well, it captures most of the sediment coming down with the water flow. But it can also be quite easily enlarged to be a nice sized pond instead, which would mean digging a new mud pond just above it. The valley dam can be enlarged to more than twice its current size (L). 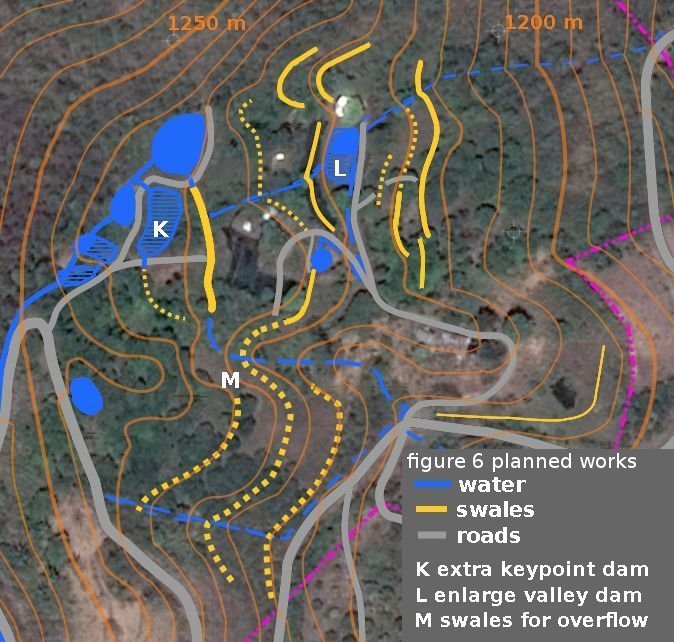 The only thing really missing is the connection between the higher and the lower parts of the design (M). We thought about adding another big valley dam there, but with already three dams to fill higher up and the valley being quite steep we decided to use swales instead. These swales can then also help rehydrate the big ridge south of that valley.

Making and building this mainframe design was an interesting experience in ‘observe and interact’. The lesson here was: by beginning with the most obvious elements we were able to go through this step by step, always monitoring results and looking for what we felt was missing to create an interconnected system of roads and water works. We’re quite happy with what we achieved so far and we’re hoping to complete the mainframe building work over the next two years.

How we worked from this mainframe design to go deeper and deeper into details will be the subject of future articles. 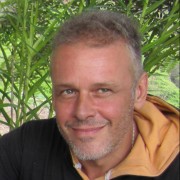