In the quest for El Dorado the Conquerors may have overlooked the truly valuable resource forged by the Incan Empire: soil fertility. According to a half-Incan chronicler of the period:

In the time of the Incas that cultivated the area was a garden of gold and silver, as existed in the royal houses of Kings, where there were many herbs and flowers of diverse types, lesser plants, large trees, animals small and large… and a large field of corn and the seed called quinua.

Unfortunately, much of Incan ecological knowledge was destroyed by the Conquerors—their codices burnt as heretical or smelted into coins. However, some has survived through tradition or been rediscovered through archeology. So let´s visit some ruins to better understand Incan agriculture and its adoption in modern permaculture.

A legendary trio among permaculturalists, corn, beans and squash were the tripod that sustained the Incan Empire. Each provided diet essentials—carbs, proteins and nutrients. In the field, each filled a spacial niche—overstory, vine and groundcover. And each benefited its companion plants—trellises, nitrogen-fixation, and weed suppression. This polyculture is still grown on farms throughout the Andes, and at the recreated gardens at the ruins of Pumapungo.

Croplands using this method have alternating rows of land and water, of raised beds and irrigation canals. Between 15-33′ wide and 3′ high, each row of beds was formed by digging out the adjacent canal. This close incorporation between land and water offers multiple benefits. First is diversity, producing fish and aquatic plants in addition to terrestrial crops. Second is the edge effect, facilitating more beneficial interactions between the two biomes. For instance, algae and fish waste from the canals can fertilize the soil, while seeds and insects from the soil can feed the fish. Also, the masses of water act as heat sinks, absorbing sunlight throughout the day and radiating warmth onto adjacent crops at night, preventing frost and extending growing seasons. [2]

At the Incan ruins of Moray are several bowl-shaped, terraced pits. They may be massive compared to the herb spirals of the modern garden—the largest being 30m (98ft) deep—and also inverted. However, they seem to serve the same function: creating diverse microclimates. Plants can be subjected to vastly different growing conditions—sunlight, wind exposure, moisture—depending on their orientation within the pit.

Key to the Incans was their understanding of hydrology, their ability to capture rainfall from the mountainsides and divert it to agriculture. While every known Incan site has sophisticated infrastructure, Macchu Picchu is perhaps the most researched example. Built into steep mountains in a wet climate, erosion and flooding would be serious concerns for the city. This was circumvented by a complex system of channels, reservoirs and drainage ditches which divert rainwater onto the terraced agricultural areas. Built around 1450, the waterworks still function to this day.

At the ruins Pumapungo, the reconstructed gardens feature these popular permaculture patterns. For Incans without machinery or large draft animals, keyhole beds provide ideal access to crops with minimal loss of growing space.

Combining multiple crops in close proximity is known to modern organic farmers as bio-intensive, defined as producing the highest yields in the least area while maintaining soil fertility. It means more efficient use of space, which is lacking in the steep Andes.

This one applies to Steiner-esque biodynamics moreso than Mollisonian permaculture. At the ruins of Ingcapirca is a boulder with 28 holes, which would be filled with water to reflect moonlight. Priests then measured these reflections to trace lunar cycles and determine the agricultural calendar.

Like tides in the ocean, lunar cycles affect the movement of moisture in soil, as well as activity of microorganisms. Therefore lunar stages determined the best times for planting and harvesting, depending on the plant type.

Allyu was a traditional community formed of multiple families responsible for managing land, labor and food production, as well as other social functions such as marriage. Each Allyu strived for self-sufficiency, producing its own goods except in times of crisis when it relied on the Incan storage system. They achieved this sufficiency through diversity, with each Allyu operating on a range of altitudes and environments. Communal labor and distribution of land to individual families also helped ensure efficiency. With such cooperation, Allyus could better achieve what we know call permaculture ethics of Earth care, people care and fair share. Forms of Allyu are still practiced throughout the Andes.

Incans cultivated various tree crops, including nitrogen-fixers integrated with crops or pasture. Chachakuma, pictured below, is still used as a hedgerow along the llama pastures at the ruins of Ingapirca. For a list of multi-functional plants, both economic and ecological, see Permaculture Plants of the Incas. https://www.nextsuccession.com/2016/04/incanPlants.html

Sean is a writer and plant-whisperer from New Jersey, who travels to work in fields such as regenerative agriculture and restoration ecology, to learn from the pioneers repairing our planet. You can connect with him on; 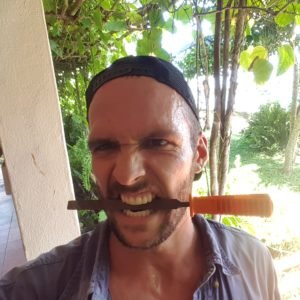 Residencies available at the Wurruk’an Ecovillage and Permaculture Farm (Victoria)

Setting up Demonstration Sites at the UK Permaculture Convergence