The idea for a permaculture garden in our children’s school first came to mind when my husband and I saw this largely unused space called the “reading garden” in the middle of Rolling Ridge Elementary School. These courtyard gardens are typical of many of the public schools in Virginia as an attempt to create safe spaces for children to enjoy the outdoors. Sadly, a vast majority of schools do not utilize these gardens.

Inspired by permaculture, we proposed the idea for an after-school program called “Sprouts,” an environmental club that would cultivate an edible garden at Rolling Ridge in September of 2014.

We were also inspired by the SEED schools in South Africa. SEED is a South African, permaculture non-profit that has infused underserved South African schools with permaculture know-how, school infrastructure and even created a local economy for the neighborhoods they serve. Our school may not have been in as dire straits as those in South Africa, but it is a Title I school – a classification given to American schools whose students have lower incomes and qualify for reduced lunch rates.

The early designs for the school yard were as follows: 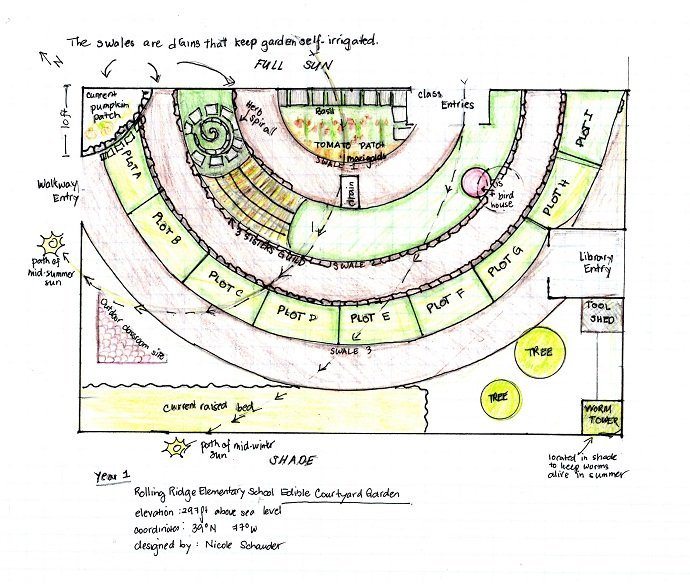 I did my Permaculture Design Course (PDC) in March of 2015, brought this sketch to the class and invited my instructor, Wayne Weiseman to come visit the school and tell us if what we had planned was achievable. He very generously came to see Rolling Ridge and advised my husband and I and the lead science teacher present, Mr. Matthew Harbert on planning our food forest and the varieties of edible plants suitable to children. He also said that with kids, raised beds were a must as they needed clear boundaries.

Thankfully, the principals and staff of Rolling Ridge were supportive of this project. We garnered even more support with the help of mini-grants from the Jane Goodall Foundation and a Whole Kids Foundation grant submitted by Mr. Harbert. This helped us get the initial support needed to run the “Sprouts” club activities and eventually led to the building of our three swales and berms.

Before we could dig however, we had to undergo a long waiting process to get approval from central offices to dig a garden on the premises. It was not until July 2015 that we got the go-light to dig our first series of raised beds with the help of a troop of local Boy Scouts led by Kyle Jordan, who is now an Eagle Scout.

Kyle not only planned the logistics of this digging event, but also raised funds and supplied the materials to set-up the first phase of this courtyard garden. Each raised bed was dedicated for use by a specific elementary grade from Kindergarten to 5th Grade.

Even though we had raised beds at the school, we still felt the need for swales and berms to be installed because they would:

Fortunately, many of my PDC classmates were very generous and wanted to help out the school. One of them took the PDC with the desire to create a local Permablitzc group. Bella Kotlyar, who now runs Permaculture DC held their third “permablitz” in October 2015 at Rolling Ridge Elementary.

With the help of permablitzers, school parents, friends and other PDC classmates, Amy Arroyo, Stephen Linenfelser and Rick Stafford who donated everything from topsoil, equipment rental, mushroom compost, straw bales and plants our three swales became a reality. After the swales were installed, a visiting official from the central school district offices said that he had never seen these types of garden beds in any other school in the county and listened intently as we explained how the irrigation passively and efficiently works in this system.

Amidst construction, our club had been meeting throughout the year and even a few times during the summer months. The first time we opened for registration, we had 90 student applicants to the club! We had so many kids interested in the “Sprouts Club” that even with the addition of another teacher on our team, Mr. Cameron Frey (who wished to make recycling a reality at the school) we had to put students on a wait-list.

It is our hope that more and more teachers in the school will incorporate hands-on nature activities in the curriculum as the benefits are enormous and can be seen in the student work below.

We also hope to add an “outdoor classroom” so that students can be taught directly outdoors instead of being cooped up inside the school for 6 hours each day.

Currently, Sprouts is an “after-school” program. Our hope is that the garden be used during school hours as well. Our hope is that weather-permitting, children would be encouraged to actually read in the “reading garden”. That classes be taught outdoors. That theory be brought to life.

As every gardener knows, a garden, particularly a well-utilized school garden, does not grow overnight. But little-by-little, we are beginning to see its adoption among the staff.

Little by little, we are beginning to see the children’s love for nature blossom. And little by little we are bringing our local community together. So many generous individuals from different walks of life have helped create our “Permaculture Playground.”

Dave and Nicky Schauder run Permaculture Gardens (www.permakits.com), a website dedicated to helping urban and suburban-ites grow their own food and sell “guilds in pots” called “permakits!” (link to www.permakits.com/shop ) They host monthly webinars on permaculture design as well as more practical topics such as “Garden on a Budget” on April 13th 8PM EST. 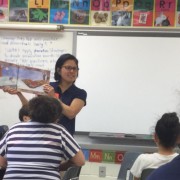 Monsanto Claims a Breach of its Constitutional Rights