This article derives from three sources. The blog I wrote for FAO (Food and Agriculture Organisation of the United Nations based in Rome) to advertise the IPC (International Permaculture Conference) during UN Year of the Soil which can be read at: https://www.fao.org/soils-2015/blog/the-answer-lies-in-the-soil/en/ ; my presentation at IPC which you can see/hear and see the powerpoint that accompanied it at https://grahambell.org/the-answer-lies-in-the-soil-2/ and thirty years of my life spent creating forest gardens and fertile soils and helping others do the same on four continents. I should say ‘we’ rather than I because many people have contributed to this garden, not least my wife and children Nancy, Ruby and Sandy.

I called my presentations ‘The Answer Lies in the Soil.’ And it does.

First of all, though, we need air and water. Without these two things, we can’t live today. So clean air, and clean water in sufficient quantities are pre-cursors of sustainable human life. However, for long-term survival, we need soil. Not just any old soil: we need enduring well – nourished and nourishing soils which just keep getting more and more fertile. In fact, soil is demonstrably the true foundation of civilisation. That is ¬ fertile, accessible, living soil.

For soils to feed us well they need themselves to be fed well.

The Answer Lies in the soil 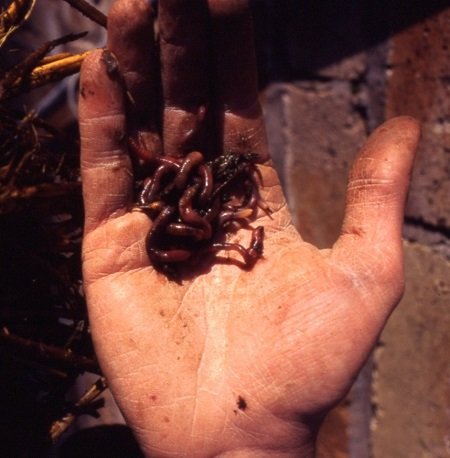 Soil and Life – neglect it at our peril

We neglect soil at our peril. Within historical memory (i.e. written records) Syria was a forest kingdom, Iraq the birthplace of agriculture and Libya the bread¬basket of the Roman Empire.

I expect anyone reading this will be familiar with the essential components of soil:

But the most important constituent, the one that resists erosion and minimises workload the most, the one which makes nutrition most available to plants and animals alike, is the life in the soil itself. In two ways, the web of life and the products that come from the ending of the life cycles of all the living creatures in the soil. And they are myriad.

Does your Tree have Roots?

For many years now we have started Permaculture Design Courses with a light¬-hearted ‘entrance exam’, part of which is to ask people to draw a tree ¬ not as a contest in drawing skills or species accuracy, but looking for one thing only. Does their tree have roots? Once folks get this they become much more aware of the earth beneath our feet. The fact that so much of what we depend on is not (in ordinary circumstances) visible to us. 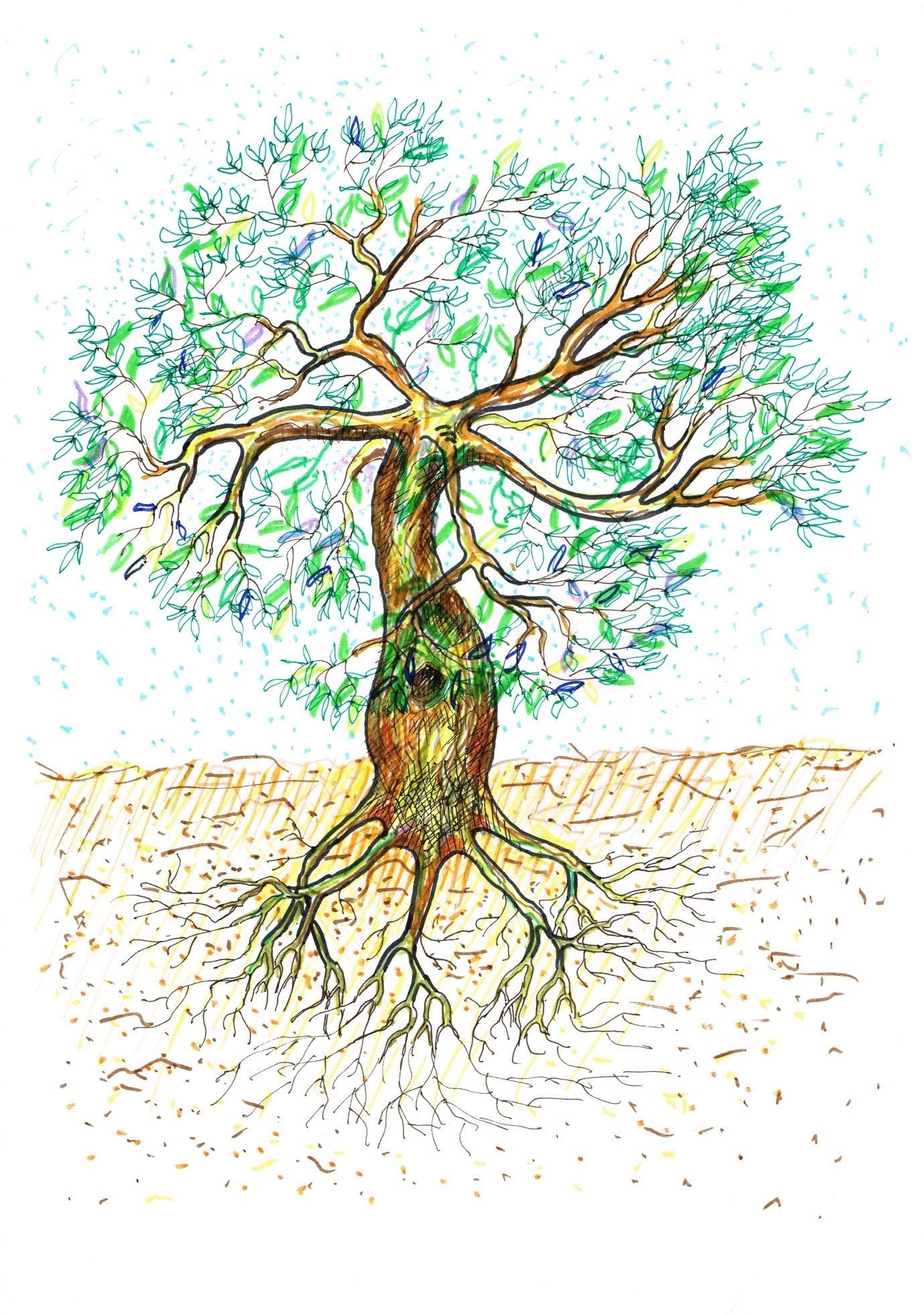 The life in the soil may be millions of individual organisms in a single handful. Animal and plant life in a constant process of exchange. Plant and tree roots provide the most astonishing marketplace, where bacteria, other roots, nematodes, earthworms etc. mingle in the jelly-like rhizosphere doing what they do best. Green leaved plants ensure energy supply by producing sugars through photosynthesis which they may swap for nitrogen (the building blocks of life- nitrogen to make amino acids to make protein) from the air in the soil harvested by (for example) leguminous plants.

We all know legumes produce nitrogen don’t we? No? Of course, they don’t! It is bacteria staying in the little root nodule hotels they produce who do that job. And hugely significant are the largest living organisms yet found on planet earth. Blue whales?! No, fungi.

Not mushrooms, which are only their fruiting bodies, but hyphae and then mycelium, vast underground networks of whitish thread like material (largest yet discovered: nine hundred and sixty-five hectares¬: which would accommodate a whole lot of blue whales).

I talked at the International Permaculture Conference about our experience and recorded research at Garden Cottage in the Scottish Borders. Eight hundred square metres (rounds up to one tenth of a hectare garden, one fifth of an acre for folks who still think in Imperial) which has so far this year produced one point two metric tonne of food (that’s 14 tonnes per hectare), all our firewood and five thousand plants and five hundred trees a year for sale in our nursery. Oh and a vast harvest of rainwater and half our electricity- plus a soft living room, playspace for adults and grandchildren, an open-air classroom, a wildlife haven and a place of general wonder.

With a thousand visitors a year, we are often asked three things: ‘Where is your worm farm?’ ‘Do you keep bees?’ and ‘What companion planting do you use?’.
Hmm. ‘Companion’ from the French meaning those you eat bread with. Answer: all our trees and plants are companions. Worm farm? You’re standing in it. We estimate a worm population of two tonnes (based on the work of Charles Darwin ¬ but that’s another story), which is the same weight as at least twenty big strong men. Worms are a bit slower in winter, but they don’t take tea breaks, weekends off, fail to get out of bed, or insist on six hour days. And they’re free. Best WWOOFers we ever had. And bees- well we have at least twenty species and they keep themselves and very healthy they are too.

It’s all about habitat. If you create the right habitat you get what you need. I often ask people ‘What is the biggest predator in this garden?’ The answer of course is ‘Us.’

Because that’s what it’s designed for. Before we were farmers we were hunter-gatherers. What the word Forest (from the Anglo-Norman) means is not trees at all, but ‘The King’s Hunting Ground’. So what we are doing in creating forest gardens is to get ourselves back as close we can to being hunter-gatherers. Less work more harvests, no pollution. Making the system as self-fertile as possible. Recycling wastes into being nutrients. Entirely dependent on the best nuclear reactor of all – the sun. And on the rain (or other precipitation) and wind cycles which are driven by the sun’s energy. 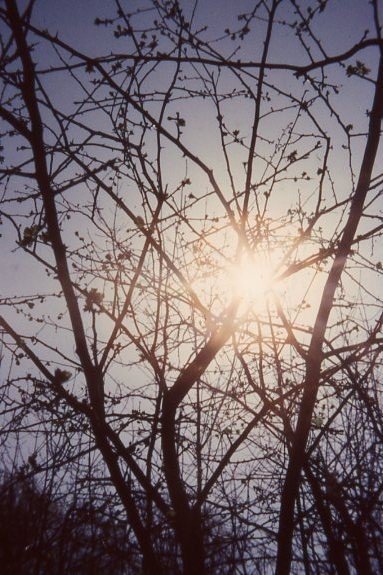 If the soil biota are the best in our work force, the energy management bosses are surely the trees. If you only do one thing to realise your permaculture dream, plant some more. And more again. Trees and the continental shelves of our oceans are the things that make life possible for humans on earth by harvesting carbon dioxide and creating oxygen. They ameliorate the extremes of climate. Continental shelves we can’t manage (except to stop killing them through water-borne pollution) but trees we can.

It’s not a lot of good making extravagant claims about what you do if you don’t do research to support your theories. All you really need to do is measure things (in as simple a way as possible) and document them.

So for several years now we have been weighing everything we harvest by species, cultivar (in some cases) and month and recording them in spreadsheets. We are the same latitude as Moscow and Alaska you might care to notice, in the Scottish Borders. As I am writing it is the end of October 2015 and we have had one of the coolest summers I can remember (10 degrees centigrade in July- it was warmer in February). Despite this, we have our highest yield ever 1.2 metric tonnes as mentioned above, and two months of the year to go. You can check the yield records here: https://grahambell.org/the-red-shed-nursery/garden-cottage-research/ . A big challenge for us is preserving food so that this yield (which mostly happens between June/ July and October) can be enjoyed year round. We have now started teaching food preservation courses to help others do the same.

How can we achieve this? Well, the answer does lie in the soil. Soil surveys done (by a student from Edinburgh University plant sciences course) on seven productive organic sites around Scotland yielded the following results for major nutrients. Calcium is shown separately as it’s much more prevalent than the others.

Notice Garden Cottage is significantly out in front. How is this achieved?

And what do you get? Well, we are what we eat. Measured from last year’s harvest on a quick analysis: 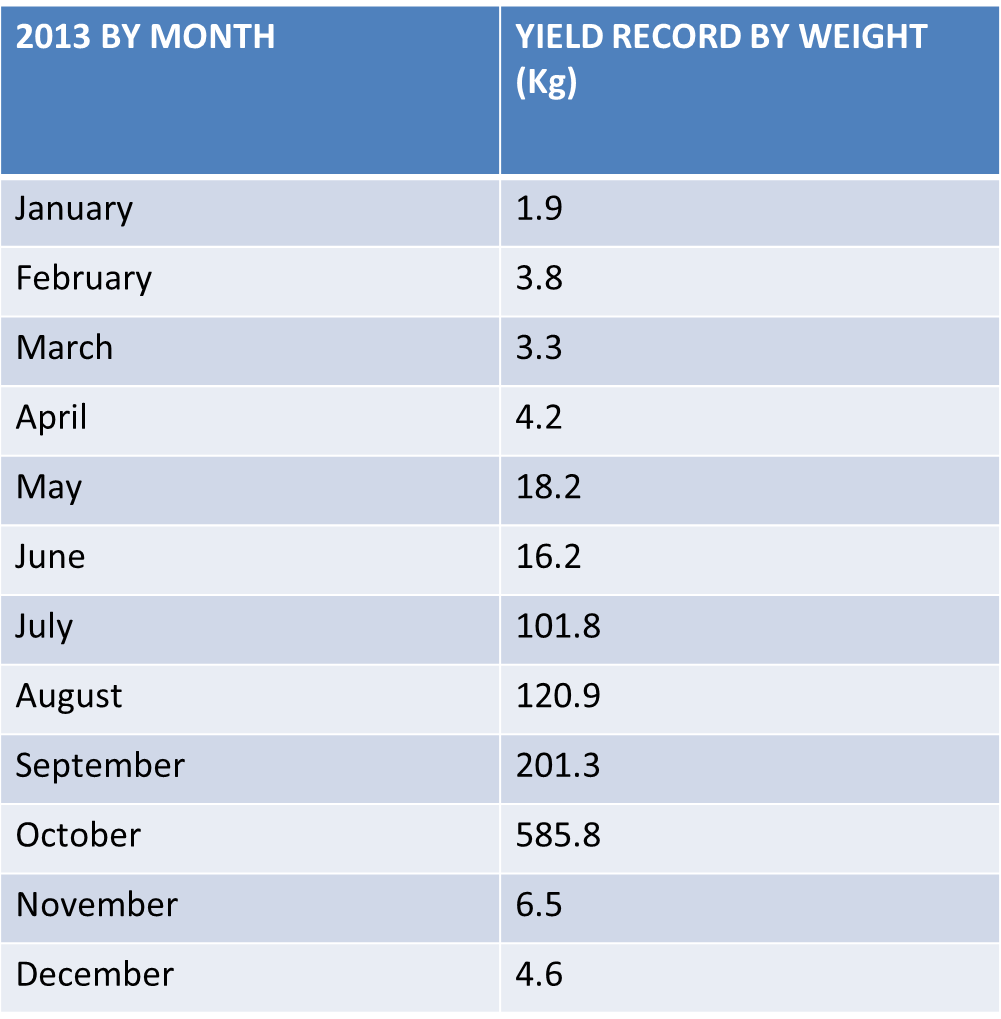 On the species front, a little more detail… There are thirty-five species of bird that nest in this small space, another twenty who come for their lunch and twenty more who come on their holidays.

Then add in thousands of species of invertebrate. Literally.

Bugs are not going to inherit the earth. They own it. So we might as well make peace with the landlord.

Thomas Elsner
This garden for many years took two hours a week. Now we’re travelling less and harvesting it more intensively it takes two days a week. This abundance springs from the intense focus on creating as much life as we can. There are no bad plants or bad insects in our garden. They are all part of God’s creation (whichever God you believe in). If you create an abundant habitat you get an abundant harvest. Let nature do its work and it will.
Visitors are welcome on open days, courses and by appointment 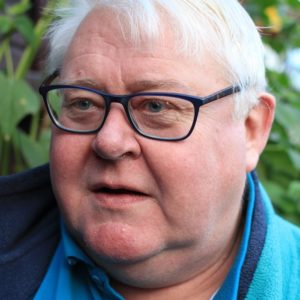 I live and work in the Scottish Borders. My wife Nancy and I have created a Forest Garden which is approaching its twenty-fifth anniversary and provides a great deal of food, fuel and company (wildlife). Our children Ruby and Sandy (now in their twenties) have also been great contributors to developing our house and garden as an energy efficient home place. I have written two books on Permaculture, the Permaculture Way and the Permaculture Garden which thousands of people have enjoyed as easy introductions to what Permaculture means in a Northern temperate climate and the society that goes with it. I have taught Permaculture on four continents. After many years engaging with business and politicians in my work to get these essential principles understood and used by people who govern and direct the world's economies I have returned (2012)to teaching courses and restarted a North Hardy Plant Nursery specifically designed to support Forest Gardeners. We welcome invitations to teach elsewhere, and visitors here by arrangement. Full details can be found on my website.

Premier Launches Program to Give SA The 'Green Edge' In Education