The term “swale” is often used by Permaculture people when designing large earth work constructions but it’s very rarely spoken of in an urban setting.

Swales are most often discussed among permaculture people when designing large earthwork constructions – not something you would find in most people’s backyards. However, these techniques can be used just as effectively in an urban setting to keep your garden plants alive throughout the hot summer months.

So what’s a swale?

Simply put, a swale is “a long, shallow depression in the ground designed to collect or redirect water”.

Imagine it as a long, wide cup as opposed to a gutter or drain. While drains are designed to get rid of water – and fast – swales are designed to keep water from draining away too fast. They are meant to slow the water down so it can be redirected throughout a garden to the areas that need it most.

Swales in the Suburbs

We showed how swales can be used on a large farm setting in connection with a dam system in our DVD “Harvesting Water the Permaculture Way”. However, we also came across a magnificent example of a mini swale design in a suburban setting in Sydney while shooting our “Urban Permaculture” Film with Geoff Lawton. 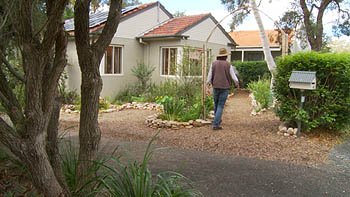 For this house, the front garden was surveyed and the contours planned to work with the natural slope of the land.

The roadway was higher than the house, so rain water was directed to flow from the footpath through two mini swale walkways. These fed the front vegetable garden beds and distributed the water out to the backyard.

The roof on the main house also collected rain in a large water tank and directed excess water to a large barrel that was hidden inside the boundary hedge. The barrel would collect and distribute overflow water directly into a small frog pond. 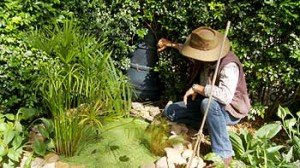 Keeping the water tanks hidden in the boundary hedges ensured the look and feel of the garden would stay intact. Even though the functional, industrial elements of the swale system were basically invisible, they still helped distribute water runoff to various areas of the garden.

In the event of rain, the frog pond would overflow and spill water into the top swale. That water would then slowly soak into the top garden beds, eventually seeping through to an adjacent swale walkway. Once in the adjacent swale walkway, water would spread into the rest of the garden, keeping it actively employed in the backyard for as long as possible. This way, what little water fell on this backyard was used to the benefit of all the garden plants.

The mini swale paths were originally planted out with thick newspapers: heaps of Sunday editions were used to smother weeds and act as a rotting mulch layer for top dressed tan bark that was layered above. This tan top layer (1) looked more attractive than rotting newspapers, (2) made the walkway easier to actually walk on, and (3) helped to absorb any excess moisture.

“This is the type of design elements we have to include in all our designs so we get the best result,” says Geoff Lawton. “Minimum input, maximum output.”

A garden like this requires minimum maintenance throughout the seasons. The way it is designed simply takes care of most of the watering work for itself. 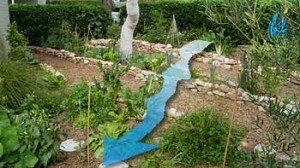 “We have contour layers designed into the garden so the water slowly soaks through,” adds Geoff Lawton.

As the water runs down the garden, it feeds a larger pond which is powered by a little solar powered pump that creates the feel of a natural water fall near the main entry point to the house.

Excess water from this pond is then directed to the backyard behind the house.

The backyard of this house uses a grey-water system to collect all the water runoff from the kitchen into another little frog pond positioned in the right top corner of the backyard.
Here, the water soaks into the heavily mulched swale trench system that runs adjacent to the house as it loops around an island garden bed to feed an assortment of productive fruit trees. The island also has its own little pond hidden amongst the overhanging fruit trees.

The owner of this garden has also planned for a chicken coop to be positioned along the boundary fence. This will collect any nutrient runoff from the chicken coop and distribute it into the system. 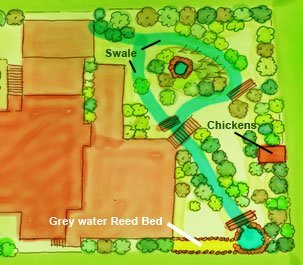 By organizing your suburban backyard into a cascading series of mini swales, you can grow plenty of fruits and vegetables with minimal additional water. Use the series of swales to direct water runoff throughout your garden, making it soak into your garden beds under the mulch.

Creating an effective swale system does take a certain amount of permaculture study and adequate planning to achieve desired results. But the end results are well worth a little extra effort in the beginning. As the system matures, you will be able to see your garden start to merge with nature, even in the middle of a heavily urbanized environment.

To learn more about this garden, check out our Urban Permaculture Digital Download.

Organic Farming gets a Break