For the past year, I have had the privilege of working with grassroots organizations in Haiti’s capital, Port-au-Prince, on issues of food security, urban gardening, and environmental protection. I have seen first-hand the Haitian spirit of ‘konbit’, an untranslatable word referring to the coming-together of a community to work for a common goal. I have seen people with no funding from aid organizations or the government, with only the resources available to the very poor, pull together to start urban gardens, to plant trees, to clean up trash, and to take care of their environment. And I have seen them succeed in the face of all obstacles.

The environmental situation in Haiti is dire. It is one of the most deforested countries in the world. Haiti’s deforestation problem was born at the same time as the nation itself. After winning independence from the French in 1804, the new republic was forced to pay ‘reparations’ to France for the loss of their colony. This is a unique and inexplicable episode in history – the only time the victorious army has paid reparations to the loser. The newborn economy, with no trade partners, couldn’t pay in cash – estimated at $21 billion in modern terms – so much of it was paid in kind as timber.

That got the ball of deforestation rolling. It is now being pushed on by two forces. The first is free-range goats, that roam the hills, munching up any sapling they can. The second is the demand for charcoal. Charcoal is an ideal commodity for the Haitian poor: everyone needs it to cook on, it can be made from any scrap of wood, and it keeps forever. Charcoal equals cash. People are desperate for cash to look after their families, so they cut down any bit of wood they can find – maybe a mature, fruit-bearing mango tree – and cash it in. (One Haitian community leader told me, “It’s not that people don’t like trees, it’s that they like their children more.”) Every day of my trip, I pass people making charcoal. It is hard, toxic work and they are covered in fine black dust that gets into the lungs and eyes.

We are starting to see droughts take hold, driven – I am convinced – by deforestation. Farmers here say that the rainy season is a month shorter than it used to be. Even in the middle of the rainy season there are now stretches lasting several days with no rain.

We can only guess at what the country was like before the devastation of its forests. The last patch of virgin cloudforest is Pic Macaya National Park, within a few kilometers of where I am writing this now. The park contains 220 species of bird, 141 species of orchid, 367 species of flower, and over 6500 species of plant in total. Biodiversity of this sort probably used to cover the rest of the country too.

In 2011, scientists working in Pic Macaya discovered six species of frog thought to be extinct. One of the scientists is quoted as saying, “The biodiversity of Haiti, including its frogs, is approaching a mass extinction event caused by massive and nearly complete deforestation.” But it is not to late to save what is left, and nature, including forests, have the wonderful capacity to regenerate.

In addition to these rich inland forests, much of the coast was originally covered with mangroves. These too have been mostly cut down. (Mangrove is particularly good for making charcoal, as it grows quickly and has a high-energy wood.) Deadly hurricanes and floods are now an almost yearly occurrence. The best (not to mention cheapest) way to defend coastal communities against storms sweeping onto the island is to reforest these mangroves. Scientists from the University of Cambridge recommended thick mangrove belts as a means to prevent hurricane damage.

Everyone here is aware of the deforestation problem. Everyone knows something has to change. To my mind, the engine of change must be community groups. One group I have been helping is called Sakala. They run the biggest urban garden in Port-au-Prince (that I know of, anyway), and feed moringa leaves and other fresh, organic vegetables to the hundreds of children who participate in their after-school programs. The children and volunteers at Sakala have planted literally thousands of moringa trees, as well as ceiba pentandra, called ‘mapou’ in Haitian Creole. 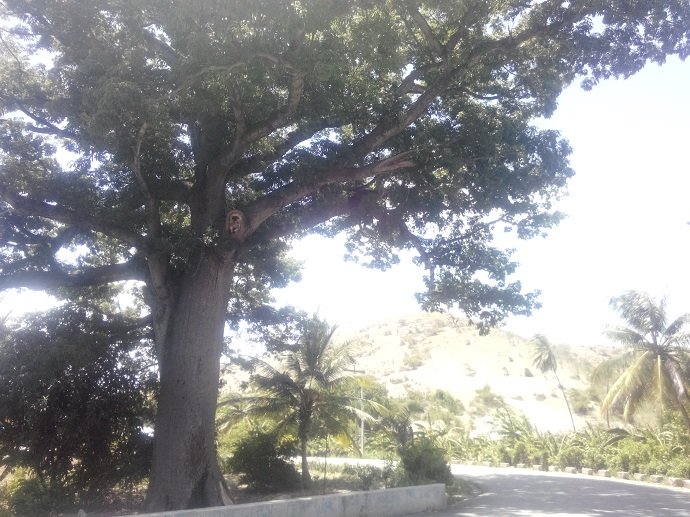 Mapou is an immense tree that I cannot describe without using another untranslatable Creole word: ‘potomitan’. A potomitan is literally the central post that supports a round roof, but metaphorically means any thing or person in a central, supporting rôle, holding up those around it. A mature mapou tree can house hundreds of other species: spiders, insects, birds, epiphytes, mosses, and provide shade to trees growing around it. (Sidenote: I often fantasize about living in a treehouse in a mapou.)

Interestingly, both moringa and mapou have defenses against being cut for charcoal. The wood of moringa is so spongy and soft that it’s useless as fuel, while many people refuse to cut down mapou because they believe it to be under protection from supernatural forces.

The flood of aid that poured into this country after the 2010 earthquake did little to help. This awful truth is slowly being recognized, as the NGOs who came to rebuild the country quietly pull out, leaving behind little lasting result for the billions they spent. It’s not so surprising: how much can foreign workers, who get to go home after their contract is up, and who get paid whether or not they produce results, really be expected to care? But the people of Haiti, the grassroots organizations I have been working with, are obliged to care. They don’t get the privilege of spending a day in the field doing aid work and going home after.

Besides Sakala, there are other grassroots organizations planting trees, raising awareness, and educating youths:

Ravagep is a group run by Samuel Cadet, operating in the north of Cité Soleil. Samuel comes from a farming family who came to the city. He loves farming, loves nature and has taught several classes of kids how to start home gardens. Ravagep organizes collections of organic waste.

Rajapre is another community-led group in Cité Soleil that has trained local children in gardening and environmental awareness. The children of Rajapre made most of the seedbombs for Project Treemobile. When I walk around the neighbourhood Rajepre and Ravagep are active in, I see little home garden plots and nurseries started by the kids they are educating.

I started wondering: how can I, as a foreigner, contribute? I may have an overactive imagination, because the answer I came up with was to cycle around Haiti for five weeks throwing seedbombs. I call it Project Treemobile, and you can follow my blog at treemobile.wordpress.com or my Twitter here.

Some of you reading this have worked with seedbombs before. Like the broadcast method of scattering seeds, they require little effort, and do not disturb the structure of the soil. Like ploughing, they protect the seeds from birds, rodents and other pests by surrounding it in soil. Using seedbombs, one person can plant an acre in a day. (Someone do the maths for me: how many is that over five weeks on a bike?) For a mass reforestation project, seedbombs are the clear choice.

(As a sidenote, I am not the first to suggest reforesting Haiti by seedbombs; the Haitian Aerial Reforestation Project, H.A.R.P., proposed by Lynn Garrison in 1987, called for a squadron of planes to carpet-bomb the Haitian countryside, but in a good way.)

I know that my bike and I cannot reforest all of Haiti, but with your help I can draw some attention to Haiti’s deforestation problem and raise funds for the community groups who are fighting it. I am doing this to get attention to the environmental problem in Haiti and raise funds for the groups that are on the ground fighting back for nature. All funds I raise go to groups like Sakala, Ravagep, and Rajepre. Please donate at gofundme.com/treemobile 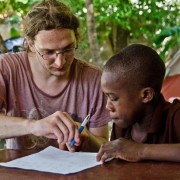 The Death Of Bees Explained – Parasites, Poison and Humans

Permaculture on a Regional Scale

Social plants: in the wild, staghorn ferns grow in colonies to improve water storage for all members