Swales are amongst my favorite permaculture projects. Though they can be laborious, especially for a shovel and pick fellow like me, they show results quickly and look amazing, texturing the landscape with both purpose and beauty. They are easy to explain: Everyone understands the concept of plants needing water. Swales are also perfect for those of us wanting to build no-dig garden beds, as digging the (swale) paths provides the necessary topsoil.

There are so many more reasons. Modern inclination is to get rid of rainwater as quickly as possible, ushering it into gutters and drainage systems, which often lead to a plethora of contaminants, including sewage getting into fresh water sources. Afterwards, when there’s a dry spell for a few days, the sprinklers come out. Instead, swales stop the deluge and allow the water to slowly, passively enter the soil and keep stuff working, preventing overfilling drainage systems and the need for compulsive watering. What a concept!

So, with such an endorsement, surely everyone is salivating at having a swale of their very own, even those who still aren’t quite certain what a swale is. Well, if that’s the case, hang on for another paragraph or few, and let’s get to it. 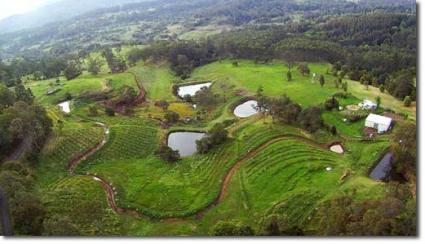 Photo: The attached photo was taken from an article already on the site. It’s an amazing shot and perfect for this article, so I was hoping it could be used.

The Swale on Contour

For the sake of swale newbies, the basic concept of a swale on contour is to catch water as it drains and hold it in place until it absorbs into the ground. It looks a bit like a massive ditch with closed ends, trapping all of the water as opposed to having it flow anywhere. Other swales systems, also known as diversion ditches or soil conservation swales, are meant slow down the movement of water in order to allow it to partially absorb, catch sediment, and/or prevent erosion while slowly ushering it elsewhere, like a reservoir. However, a swale on contour aims to keep all the water in place until it is absorbed.

“On contour” simply refers to the fact that this sort of swale works on the principle that by keeping everything level, such that the path of the swale moves along the contour, or elevation curve, of a slope. Doing this means that the water absorbs evenly into the land below as opposed to flowing to the lower end of the swale. Without following the same elevation level, the water would flow to one side or the other, and preventing this flow is what makes the water become passive rather than destructive, as is the case with water draining en masse and quickly in one direction.

Lastly, another nearly ubiquitous feature of swales is the result of all the soil that is removed to create them: the berm. The berm sits on the downhill side of the swale and is the perfect place to grow trees and deep rooting plants like strawberries, rhubarb, asparagus, comfrey, and dandelions. The deep roots will keep the berm stable, as well as suck up the moisture from below so that the newly hydrated soil doesn’t become overly saturated.

The Right Tools for the Job

In a world with greater money sources than spring from my pockets, as well as more technological knowledge than I currently retain, swales can be fairly hi-tech operations. Laser levels can help find the contour lines of a property, and major league digging equipment can be brought in to quickly, painlessly (at least from the human side of things) excavate. For a massive swale, something more river-like than what most of us will attempt, this makes sense. For me, however, the world of swales is a bit more rudimentary.

To be completely frank, half of the reason I got into gardening and, subsequently, permaculture is that I enjoy being outside and on a project, getting dirty and fixing problems. If there’s a hole (or swale) to be dug, I want a shovel. If there’s something that needs to be level, like the bottom of a contour swale, well then, a water level will suit me just fine. And, when it comes to finding that contour line, I was both happy and enlightened to discover the simple but effective A-frame.

YouTube! Video: How to Make a Permaculture A-frame Level

An A-frame is called thusly because basically one must build a capital “A” out of wood to make it. The two legs need to be of equal length, just as our elementary school teachers taught us, and about midway down, they’ll be connected by a third piece of wood, equidistant from the bottoms of the legs. Aim for the open end of the A to be between three and six feet. Then, there are two options:

1. Mark the exact center of the crosspiece and hang a plumb line from the center point at the top of the A. When the plumb line hits that centerline on the crosspiece, then the two feet of the A are on level playing fields.

2. Or, simply strap a water level to the cross bar so that when it’s level the two pieces of ground upon which the A is resting are the same elevation.

Before digging anything, it’s important to carefully determine the rough location of where to place a swale. In doing so, it’s imperative to consider the gradient, as a swale should only put installed on something with nothing more than 15% gradient, or a slope that climbs roughly 1 meter for every 7 meters it moves horizontally. Following this rule prevents mudslide problems that steeper gradients would cause, and that could potential be devastating to a property.

Other things to consider are that the longer the swale can stretch the wider reaching the water absorption will be, and the higher it’s placement the more space in which the water will have to expand underground. So, ideally, a swale will be installed at the highest point possible but still low enough, downslope, to catch water run-off. From here, spread the water out on level plain by extending the swale on contour for as long as possible, that way water can absorb evenly into the land downhill.

Lastly, what I’ve noticed in my successes and failures of playing with swale systems is that, if there isn’t a noticeable flow of water to feed the swale, it may not fill, rendering the effort much less advantageous than once hoped. I’ve built several swales, some of them absolutely required a passive overflow, others never held more than a couple of inches of water in the middle of a rainstorm. I now make sure I know where a significant source of water will be coming from before putting in the effort.

Putting the Right Tools to Use in the Right Place

Once the general area is decided upon, it’s time to get more specific, which means pulling out that A-level we built a couple of sections ago. Use the A-level to stake out the contour line and the exact route the swale will be taking. This will likely not be a straight line, but rather a sexy, curvy number that’ll give the system some personality, like those amazing terrace gardens in Asia. Mark the entire thing out, including a safe area for water to passively overflow should the swale fill up completely.

Using the marked contour line, dig vertically into the hill, piling the dirt on the downhill side of the swale. The depth of the swale should remain the same and can be measured from the established contour line then leveled with a water level or the A-frame later. The general idea behind digging the swale is that it should be about three-times as wide as it is deep, and the berm—the pile of excavated dirt—should be mounded to create the upper part of the bottom side of the swale. Make sure that the base of the swale is level so that the water disperses evenly.

Other than catching and storing water on your land, the biggest benefit to having a swale is the growing potential of the berm. It will be mostly composed of rich topsoil that’ll be well hydrated. It’s important to plant on the berm immediately to prevent it from eroding. Trees will help to make sure the soil doesn’t get too saturated. Deep rooting plants—the aforementioned strawberries, rhubarb, comfrey and so on—will help to stabilize it. And, as always, a good, nitrogen-fixing ground cover is going to stop the earth from drying out or getting overly weedy while simultaneously enriching the soil.

YouTube! Video: Hydrating a Suburban Food Forest With Swales
• I’ve not had a chance to try it, but an interesting technique I’ve seen to prevent water from going beneath the berm and washing it away is to have it begin just inside the lip of the swale rather than atop the lip. The water will absorbed into the base first, which is kept in place by the fixed dirt left when digging the swale, and this should insure that water permeates into the berm rather than eroding it.

Another important aspect of making a swale and, particularly, avoiding possible problems is to plan for passive overflow. The best way to do this is to have a sizeable, say equally as wide as the swale is, spot that is perfectly level and below the top of the berm where water can overflow into a safe place, either a pasture or another swale or a water catchment like a pond or damn. At the overflow point, it’s best to have something like a plastic sheet, stones or—ugh!—concrete to prevent erosion.

Once the base of the swale is satisfactorily level, a nice thick layer of mulch is a good idea. It will add nutrients to the water that is going into the soil below, as well as prevent evaporation. In fact, many people choose to fill up their swales in order to make convenient and logical access paths around the property. It’s just another viable purpose for having a swale.

After that, it’s just the permaculture way: Observe, find solutions within the problems that arise (with the right steps these shouldn’t be too grand), and reap the productive benefits of forethought and working with nature.