Tom and I arrived in Port Vila Sunday afternoon and went to our accommodation. We settled in and got prepared for the next day. On Monday morning we went to the Financial Services Commission in Vanuatu to register our Charitable Organisation, the Permaculture Research Institute Luganville for Incorporation. We were told we had to have the original signatures on the document, not the scanned copies I had organised from everyone before we left home, so we had to wait for the volunteers to arrive that afternoon. We picked up Dani, Anne and Meriem from the airport that afternoon and made it to the FSC office just before closing time, where we signed the document again and they made copies of our passports. We got a receipt for our payment of the Incorporation fee and went to our accommodation. Later that evening we showed the volunteers the food market in Vila, before we went back and had an early night.

The next morning our hosts kindly gave us a lift into town in the morning and we went straight to the department of immigration, where we applied for a 12-month visa for the volunteers. I showed the receipt for the application of incorporation, and the process went smoothly, so that an hour later Dani, Anne and Meriem had their 12-month visas in hand! In the afternoon we visited another not for profit organisation that our host suggested we might be interested in meeting with, and afterwards we met with the head of ADRA Vanuatu, who we know from previous visits. Everyone had great information to share, which will help us in the setup of PRI Luganville. Small gems of information seem to come our way here regularly, which makes life so much easier!

On Wednesday morning we flew to Luganville, where we rented a house across the road from the Ni-Van couple who are donating the land. This will make it easy in our talks with them and for access to the land, whilst not having to impose on them for accommodation initially. (The rental house being across the road from them was another happy little accident, which we had not realised as we booked it! Things just seem to roll along here…) Our hosts at our accommodation kindly provided us with some initial supplies, so we made some lunch and then Tom and the volunteers went to the local market to get supplies. The markets here are abundant, and the island of Santo (home of Luganville) actually supplies Port Vila with produce now as Vila is still recovering post cyclone. The food is cheaper on Santo also as it is all grown locally, whereas in Vila at this stage a lot is transported in from Santo and therefore prices have increased. We had our first meeting in person with all the members of the committee of PRI Luganville. Agnes called her father, who will be coming to Luganville from Vila on Sunday especially to help build and teach Tom, Dani, Anne and Meriem how to build the huts. Ray has already organised the thatch to be made by some villagers, which will be delivered soon. Agnes’ father is apparently very keen on learning more about Permaculture, he has been reading through the Introduction to Permaculture that Tom left with Ray and Agnes last time he was in Luganville.

On Thursday we had a lot of running around to do, we found a solar system that we liked and bought some basics for the property like knives, bush knives, a shovel, an axe and some pots for cooking. We had to submit the original signatures of the Ni-Van couple, Ray and Agnes, who are the donators of the land for the site and are part of the committee for the NGO we registered. We also opened our own PO Box and had to notify the FSC of this in writing, so they could alter our postal details. We met with the food security officer of the department of Agriculture in Luganville and with the department of Forestry, who were both very excited about the project and what we are trying to achieve. It is important that we have good connections with local government representatives and that they know what we are trying to do. They are keen to supply us with some trees which they can propagate for us to get things established quicker. We also met with Adelyne from ADRA, who said she already has two Ni-Van people interested in doing the course. There seem to be already a number of local people interested, who we have been told about by different sources in Vanuatu. 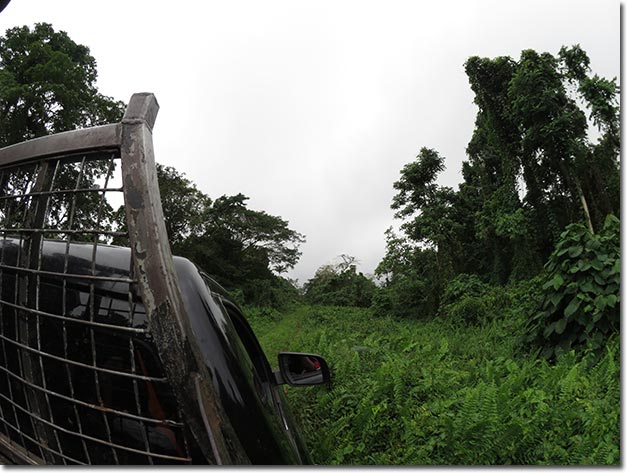 On the way to the new PRI Luganville site 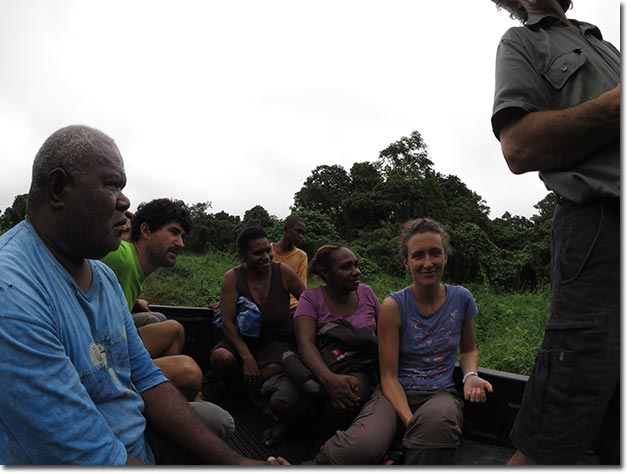 Common transport: In the back of a ute on the way to the site for the Permaculture Research Institute Luganville On Friday we went to the property. First we drove to a house which is around 25 minutes walk from the property and where Tom, Dani, Anne and Meriem can stay until the huts are built. A family lives in the house and had already cleaned two rooms for our guys and girls, so they can sleep there and eat with and learn from the family whilst they are preparing the land. After looking at the house we went to the property. Rain had been falling on and off, and the vehicle which took us got bogged in a ditch and had to go back. We walked from there, around 15 minutes. The land is fenced as the land we have to go through to get there is owned by a company (that Ray works for). There is a hut on Ray and Agnes’ land, and they have planted a small garden there, which will also help us get started. The land we have been given for PRI Luganville is a beautiful 10 hectares of rainforest, with some clearings dotted through. We decided to walk back, after we had some Kakae (food) which we had brought along with us. We also had some Navara, which is the inside of a sprouted coconut (think a less sugary and slightly denser type of fairy floss ball). The walk back was wet, as we got some fairly heavy showers of rain. We learned a lot from Ray’s sister, who was with us and had lived on the land for a lot of years. She pointed out medicinal plants and edible plants, all in Bislama with a little English. She is very keen to spend a lot of time on the land with our crew, so she will teach us all a lot! She had to show us all the way to walk back, it took around 2 hours to walk back to Luganville. We went through neighbouring paddocks and properties, and possibly went the long way. By road it should take around 1 1/2 hours to walk back. 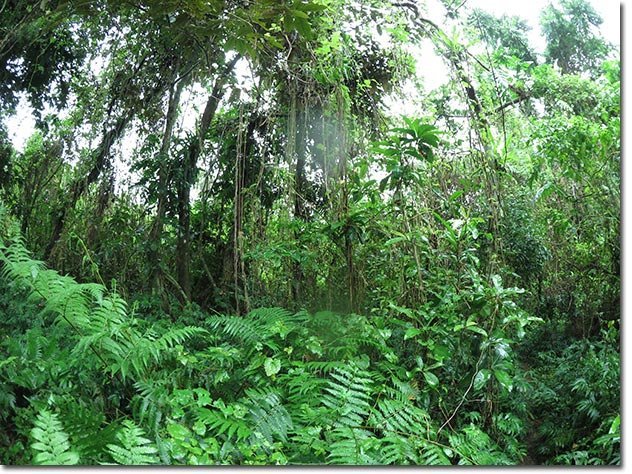 A piece of our jungle: PRI Luganville, Vanuatu site 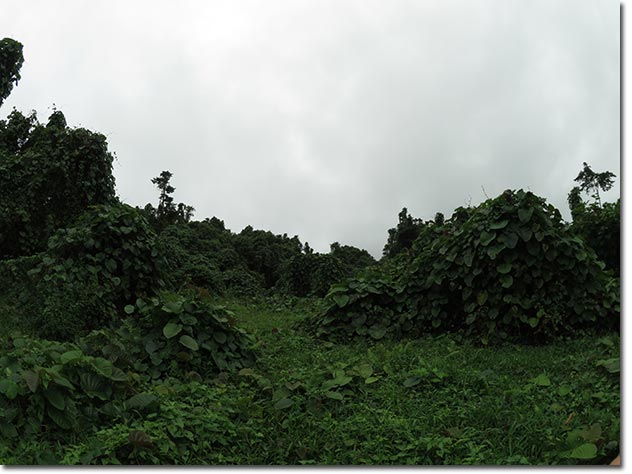 Clearing on the site

Saturday was our day off, so we had a very quiet day with a bit of a sleep in. Tom and I went into town and got a “mifi”, a mobile modem so our crew can stay in touch. Reception is not the best on the property, but there is a phone tower not too far away and if you are patient, emails can be sent and received on the property. We got some food supplies before the markets and supermarket closed (Sunday almost everything is closed) and returned to the accommodation to rest.

On Sunday Agnes and her sisters showed us how to make traditional Lab Lab, or in this case Tuluk, a folded Lab Lab, made from Manioc (casava) and fresh coconut milk, filled with minced beef, spring onion and ginger. This is wrapped in banana leaves and heated on hot rocks. I had to leave just before they went on to the hot rocks, so I missed out on Tuluk unfortunately. But I was promised they will make it for me when I come next time!

On Monday (6th of July), our crew and Tom will move to the house and start surveying the property. Agnes dad will stay with them at the house and help with the building of the huts. Depending on the amount of thatch made, time and money, they may build 2 or 3 small huts. The solar system will be connected up and they will assess what is needed for a water system. Tom will be there to assist until Monday the 13th, when he will fly back home. Then Dani, Anne and Meriem will be by themselves in the forest, setting up PRI Luganville. Anne will try to update our site permacultureluganville.org regularly, so that everyone will stay informed of what they are doing.

I am very happy to be part of this amazing project and hope that we can assist the wonderful Ni-Van people by introducing Permaculture systems. 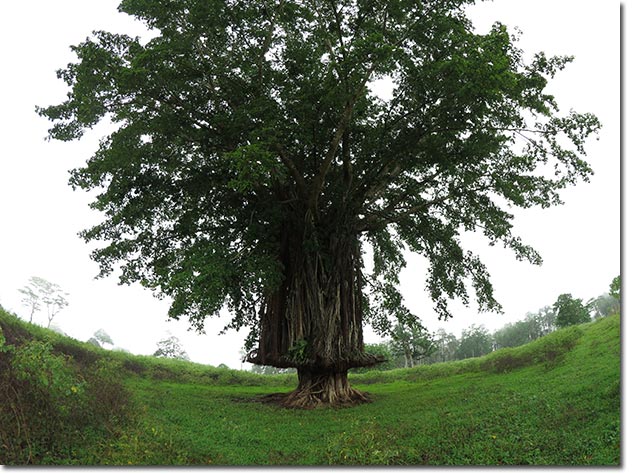 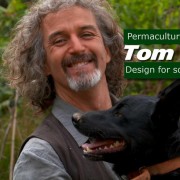 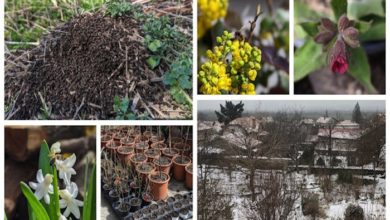 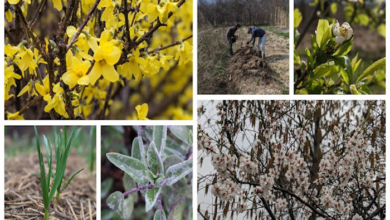