My wife Emma and I have recently been offered roles in two separately exciting projects that are striving to bring permaculture to two very different audiences. One is working with an indigenous community near (as in a two-and-a-half hour bus ride, crossing rivers that have no bridges, into the thick of the jungle) Rio Dulce, Guatemala, one of the most bio-diverse stretches of land on the planet. The other is developing a curriculum for summer camp, “Green Camp”, for a private school in Guatemala’s tourism (and expat) capital, Antigua.

We are immensely pleased to be part of both of them, to hopefully share the upcoming experiences with readers at Permaculture News and to most definitely share ideas of permaculture with new students and friends. To get the ball rolling, I wanted to write a bit about what I know is happening with permaculture in other parts of Guatemala, as well as explain our projects, both of which have recently begun. There will be useful links, witty turns of phrase, and all those great things. 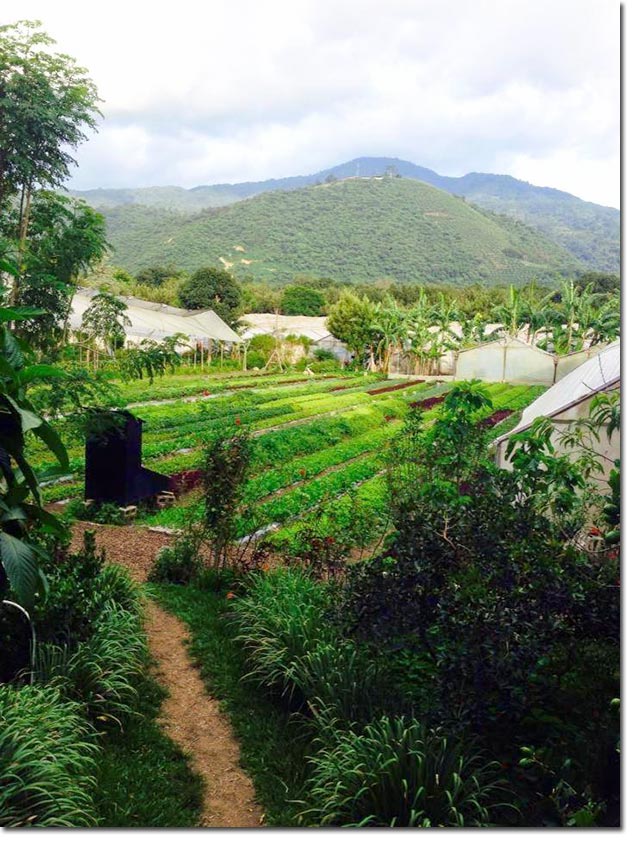 Emma and I have lived in Guatemala off and on since 2008, and we last left in November of 2013. At that time, we knew little to nothing of permaculture. Consequently, we knew little to nothing of what projects were happening here. The two or three months following our departure put us on the path that has brought us back here in April 2015, in the name of permaculture, to discover it has become a byword amongst the eco-minded hostel owners and school administrators we’d once worked with, both from our involvement in the movement and the rising popularity of permaculture in the country.

Around Antigua, our base for the last five years or more, there is a great spot called Caoba Farms. I used to volunteer there three hours a week in exchange for a bag of fresh, organic produce (this opportunity is available to anyone). Upon returning, I visited the farm after eighteen months of transformation for the both of us. There is still bio-intensive organic farming (double-reach rows of annual crops) in the center of the property, producing vegetables for local restaurants and the farm’s shop. But, I can now see so much more, including cyclical systems with chickens eating the scraps from weeding, the manure used in the gardens; a beautiful polycultural forest surrounding the bio-intensive space, with an entirely different mix of plants; and expanded nurseries for reproducing and exploring new crops. For those traveling to Antigua, it’s free to visit the site, tours are available, and there is a monthly farmer’s market/party.

Otherwise, most of the permaculture going on in Guatemala happens around Lake Atitlan, where there are two sites—IMAP (Mesoamerican Permaculture Institute) and The Yoga Forest—that offer PDC courses. The Yoga Forest obviously has yoga as well, including courses in that, and is an all-inclusive eco-hotel. IMAP is a non-profit with outreaches into many, many different community projects. They are both associated with Atitlan Organics, located in a village called Tzununa, that has had an explosion of permaculture ventures. Typical Home in the Village of Lampara

Upon returning to Guatemala, Emma and I were excited to move back to the eco-hotel, Earth Lodge, where we’ve spent much of the last five years. We were anxious to start introducing some permaculture gardening techniques to the avocado orchard there, some 400 trees worth, and Drew and Bri, the owners, welcomed us back with open arms and immediately gave us a bit of the farm to play with. It now has two hugelkultur mounds, two swales, sheet mulched garden beds, and a wild mix of around fifty edible varieties.

To the point, also working at Earth Lodge was an excitable French-Canadian named Sergio, a tree trimmer, and he loved the permaculture ideas we were sharing. Serge was in Guatemala because he is involved with an NGO called Think Twice that works with rural villages in the Rio Dulce area, near the small wedge of Caribbean coast that Guatemala has. Our garden bed and conversations with him were inspiring enough to warrant us invites to be part of the project in Rio Dulce.

In June, we visited the first site, the remote indigenous village mentioned before, Lampara. There, we stayed with a local family in a thatched hut, sleeping in hammocks and cooking over a wood-fire stove. To my delight, Rene, the host father, had a magnificent garden around his house with upwards of twenty different edible varieties growing, including lots of perennial choices. Also, he was entirely open to the few suggestions we had.

In the end, we decided that we would likely put in a garden and permaculture systems into place around the village school, which has a large, empty space. It will be a demonstration site for parents to see, with the option of getting help converting their properties into satellite food forests. We’ll also work with volunteers and students to share what techniques we know. Rene and his brother will act as liaisons between the NGO and villagers. Volunteering opportunities should begin this October.

• To our horror, driving to the village from town, we went through a series of plantations—palm oil, teak tree, and rubber—that were the end result of massive of clearing of jungle. We were pleased that Rene, who has recently entered the rubber tree growing business, is inter-planting his trees with corn, hopefully with beans and squash to come (on our recommendation). He did already have a working knowledge of companion planting; however, doing so with rubber trees, as it’s an industrious mono-crop, is not common practice. 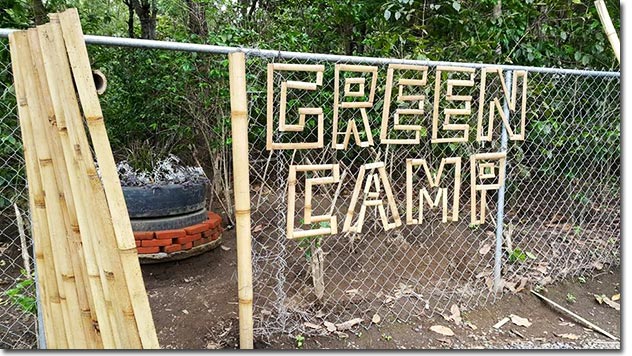 The other project with which we’ve become involved is a “Green Camp” for children on summer break. Bryant, the owner and operator of Oxford Bilingual Montessori School, has recently moved his school to an aging organic coffee finca that is slowly converting to other, more viable sources of income. We’ve worked with him on three previous occasions, teaching English for his language school in Guatemala City, running an educational NGO—Las Manos de Christine—he founded to honor his mother, and lastly working at the bilingual Montessori school.

Upon hearing that we were coming back, and knowing what we’d been up to the previous eighteen months, Bryant penciled us in as possible contributors to this new venture he was planning. Inspired by the Green School in Bali, he is hoping to grow much of the food served by the school cafeteria on site, as well as incorporate renewable energy sources, water harvesting, and waste management systems, all for the sake of being green and educating the kids about it.

So, over the next three months, June 15-Sept 15, Emma and I will be developing a curriculum and teaching permaculture classes to elementary school children. In doing so, we will simultaneously create the beginnings of a kitchen garden and food forest that will serve the school in years to come. Each project will be week-long undertakings, compiling to be functioning system, and will include things like building no-dig beds, starting seedlings, setting up greywater systems, making a frog pond, and so on.

As a means of information sharing, in the coming weeks, I hope to write articles about the most successful projects, including lesson plans and related activities that we do with the kids. Hopefully, these can work in other classroom settings (such as at the project in Rio Dulce), or they could even just be fun projects for parents to do with kids. We’ve just finished our first week of classes, and by the second day, the kids were so excited to be building a garden that, without influence, they chose to keep working on it rather than have recess.

• Working in the middle of a coffee finca has been an amazing opportunity to show the children the difference between a monoculture and polyculture, demonstrating why the prior might not be the best method. Sadly, nearly the entire coffee crop of Central America has suffered at the hands of a fungus, coffee rust (or la roya), and growing organic coffee, even on well-financed and long-standing plantations, has now become a struggle here. 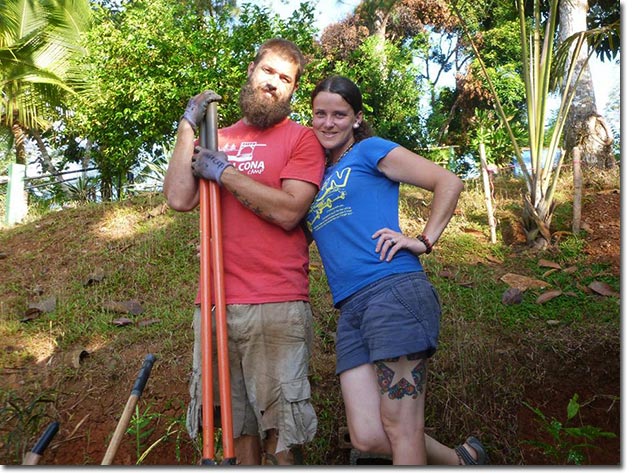 What an amazing way to come home! Emma and I are now looking for land in Guatemala, likely around the Rio Dulce area, to begin our own personal permaculture site, completely off-grid and pushing towards that ever-evading notion of self-sustainability. It’s such a relief to know how excited people are about permaculture here and simply shocking that, as we were evolving on our farm-volunteering adventure, so was the place we’ve come to love so much. There are now so many people here to learn from, to seed share with, to involve in these projects and the ones to come. What a moment to be alive and well in Guatemala.

Permaculture - A Real Education for Children