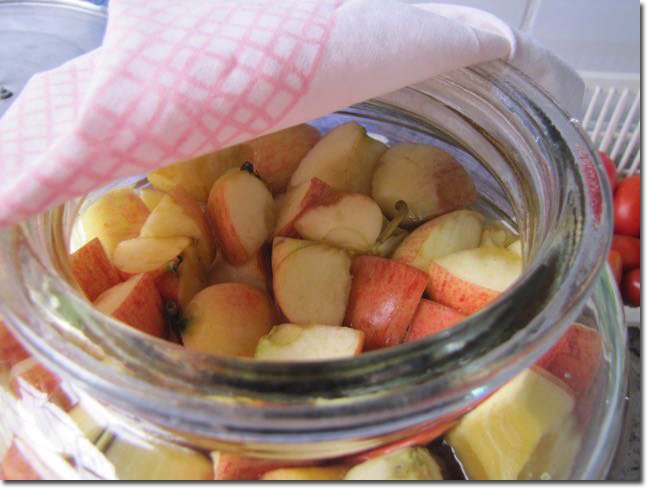 Apple Cider from Above

I ran into a funny story in a Michael Pollan book not long ago: The American pioneer legend, Johnny Appleseed, used to stay two or three hops west of the colonial expansion in the USA, buying up large swaths of riverside land and planting apple trees. In most historical accounts (the Disney version), he is depicted as an angel of virtue, making sure that everyone got their apple a day to keep the doctor away. In actuality, he was planting apple orchards because settlers wanted to make their boozy apple cider wherever they went, so there he’d be with a load of apple trees mature and ready to sell when the arrived. The apple a day creed was a promotional quip by apple growers during the prohibition. That’s the long way round of saying, since those prohibitive days, many of us have lost some lesser noted, but equally valuable skills, for self-sufficiency.

One of the aspects of practicing permaculture that often gets overlooked—in the building of soil, the harvesting of water, the conserving of energy, and all those other great things we get up to—is some level of proficiency in the kitchen. It’s well and fine to grow a bunch of wonderful, nutritious food, but it’s also very easy to miss out on some of the basic, everyday products we could be making at home. Doing so would be one more effective way of stepping out of the industrial food production machines that have been steadily damaging the planet. For a fraction of the retail cost, we could easily be creating healthier, organic versions of some of the most important mainstays in the kitchen: booze and vinegar.

How to Make Hard Apple Cider

If I had known making apple cider was so simple and quick, my teenage years would have been vastly different. After all, what parent these days would suspect a son of buying a bunch of apples to make booze? They would have guessed I was on a health kick or something, which is exactly how it happened that I learned to make hard cider. My wife and I use apple cider vinegar for conditioner in the shower (great for all-natural dandruff prevention), but in Central America, our home, finding a true apple cider vinegar, from apples, is very difficult. So, it was time we make our own.

But, to make apple cider vinegar, we first had to make hard apple cider then wait for it to turn to vinegar. Half of our first batch never made it to the second step. I mean, I had to taste it, and it was too crisp, too refreshing on a hot Guatemala day, to simply let it all go the way of hair rinse. So, right away I know that for every batch of apple cider vinegar (a month-plus process) we had on the go, we’d better put at least a few on the go for hard apple cider (a week process) if we ever hoped to make it to the final product.

So, first things first is the way to apple cider, which, by the way, can be made from any apples, including those planted from seed and often considered not for eating. 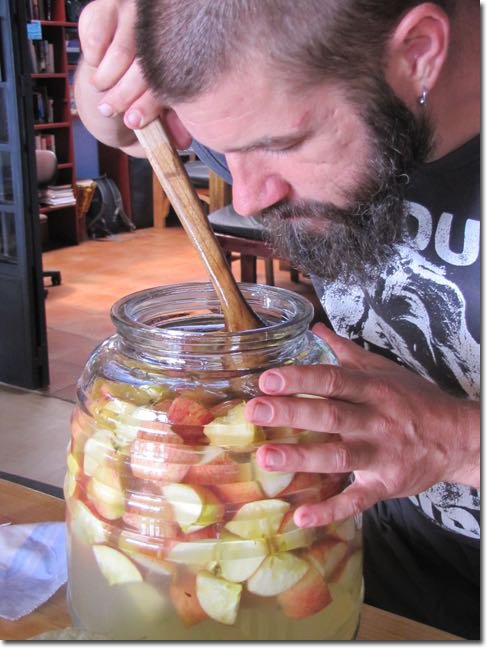 1. Get a large glass container and fill it halfway or slightly more with apples cut into roughly one-inch (two-and-a-half centimeter) squares, nothing smaller.

2. Next add in water and sugar (homespun honey is also a great option here), with the ratio one gallon to one cup, respectively. Stop a couple of inches before the top of the container.

3. Stir it all together, attempting to dissolve the sugar. Then, cover the container with cheesecloth or some sort of breathable material that’ll keep bugs out but let air in. Secure it with a rubber band or string.

4. For the next week, give the mixture a quick stir once or twice a day. Within the first couple of days, it’ll start bubbling. When the apples chunks start to sink, the sugar has turned to alcohol, and it’s drinking time.

Seriously, it’s that simple to start producing your own booze. A similar process can work with all hard fruits, and slight variations work for soft fruits and homemade wines (a bit more involved but also easily doable). It’s just very important to remember, when fermenting things, gas builds up and can make bottles explode, even after the process is seemingly finished. Refrigeration slows down fermentation a great deal, but it’s still good form (and much safer) to release the gas daily once you’ve capped off the cider. 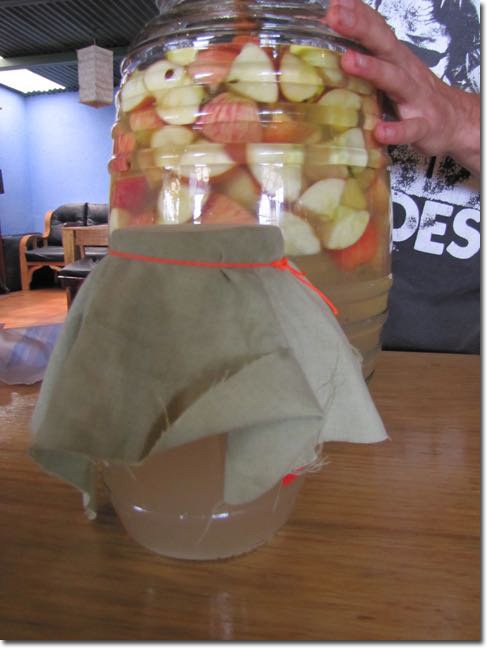 How and Why to Wait for Apple Cider Vinegar

Once the hard apple cider is completed, the process is super simple: Strain out the apples, pouring the liquid into a new container. Then, as with gardening, it’s a lot of waiting for the magic to happen. Cover the container the same way as before, some breathable material fixed to the top. This time, however, there is no need for stirring daily or doing anything really. Over the next three or four weeks, sediment will begin to form at the bottom and a mother will begin to form at the top. Eventually, it turns into apple cider vinegar, a substance that has been used medicinally for thousands of years.

• If it’s too strong after a month, then simple water down a bit. If it’s not strong enough, let it sit a while longer. Strain away the mother and sediment and store it in a dark, cool space. It’ll last forever.

The uses of apple cider vinegar are absolutely incredible, stretching from truly effective hair conditioning to household cleaning products to cancer prevention. It has been known as a treatment for obesity, high blood pressure, arthritis, and depression. It can be used for a better complexion, for fresher breath, and for weight loss. It can show up stain removers, degreasers, and anti-bacterial solutions. It’s also delicious in salad dressings, splashed over beans or thrown into sauces. As permaculturalists, accustomed to looking for things with multiple purposes, simply put, apple cider vinegar is the freaking mother load.

For me, knowing that I can personally, easily produce something so useful with ingredients that are out in the garden seems irresistible, and who would want to resist anyway.

How to Build a Grey Water Planter Bed