Ram pumps are fascinating because they achieve the seemingly impossible task of pumping water to a higher height than the water supplying the pump, and they do it with no added energy input. This is often misunderstood as needing no energy, but a casual lesson in the laws of thermodynamics tells us this is impossible. A ram pump harvests energy from a high volume of water as it flows through the pump from a low head source, with a low volume of water, to a higher head. Head is the height of the water relative to the pump.

Imagine water running through a pipe with an internal diameter of 100mm and length of 25m. The pipe would be carrying a water weight of 200kg, since one liter of water weighs 1kg. It is similar to an oil drum full of water.

Ram pumps use the incompressible nature of water (you can’t cram more water into a container by ‘squeezing’ more in) to gather energy. Imagine 200L of water in an oil drum. Now, imagine it free falling. Then, crash! The drum hits a concrete floor, stopping immediately with a loud noise and the concrete crumbles. A ram pump functions with similar physics. Water gains velocity as it falls toward and through the pump, eventually causing the pump’s waste valve to forcefully shut. The high velocity, combined with sudden halt, means that there is a large storage of undispersed energy. In the ram pump, a much smaller pipeline comes off of the main pipe and allows this built up energy to push water through a one way valve. 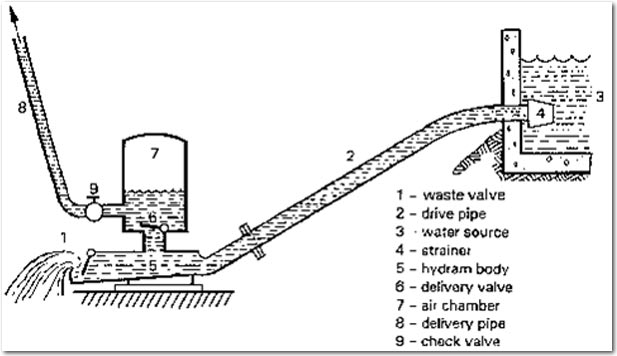 Eventually, the built up energetic pressure dies down as water moves through the small pipe, causing the water to cease flow. The one-way valve (which will be explained further in the next paragraph) to the small pipe then shuts, trapping the remaining water in the small supply pipe, waiting for the next blow of the battering ram. The water in the main (drive) pipe has stopped and bounces back from the shock of the initial hit. The negative pressure from the bounce-back allows for the waste (‘clack’) valve to open, via gravity. The process then repeats.
Branching off of the previously mentioned one-way valve is a small, air filled tank that absorbs the shock from the ram’s pressure spike. After the valve closes, the pressurized air in the tank re-expands and continues to push water up the delivery pipe. The absence of this tank would significantly reduce the service life of the pump by damaging the valve.

Ram pumps needs a certain amount of fall in order to operate, which can cause complications. Dependent upon several variables, minimum fall ranges between 500mm and 1000mm. Furthermore, the amount of fall directly affects how high the water can be pumped. Commercial rams are typically designed to lift 10x the fall (e.g. 1 meter fall=10 meter lift). Pump height also affects the amount of water pumped; greater height means greater water weight in the pipe that needs to be overcome. Thus, less water will be delivered through a ram with a heavy fall.

This is a revised introduction about ram pumps, based on another permaculturenews.org article that can be located here

How a PDC Can Change Your Life!