I love to travel. Whether that’s camping, road trips, conventions, visiting family… I enjoy all of it. I feel most alive when exploring a new place, or being a part of the natural world, or experiencing something new. Perhaps because I work from a home office most of the time, getting out and about is especially gratifying. And we have a need to experience things for ourselves – looking at a picture of the Rocky Mountains is not the same as going there.

As a child I travelled quite a bit, from England to visit all my family, to California on road trips, camping treks across BC, and the highlight of each summer was a trip to the Oregon coast. I am so fortunate to have been born in British Columbia and explored the southern regions of this diverse province. And my favourite place on planet earth, if I had to choose one, would be the Oregon coast. It’s a magical place, with the dark skies at night, beautiful uncrowded sandy beaches, and of course the never-ending roar of the ocean. Perhaps because my mind always seems to be busy, the white noise of the surf seems to shift my brain down a few notches. 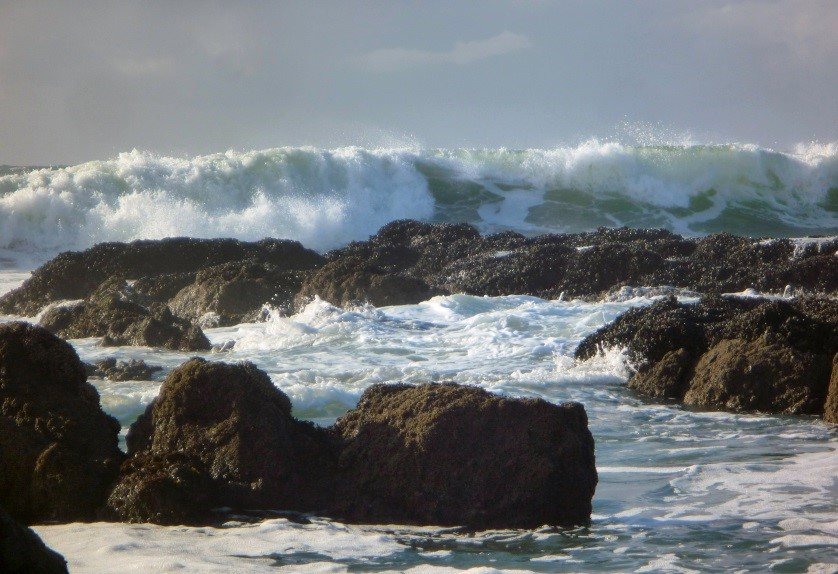 Last month, my family and I went down for a few days over Christmas break to experience the coast in the winter, see some whales (which we did through our binoculars on a cliff), and enjoy the rough winter surf. I really wanted to get away from thinking and worrying about the state of our society and the planet in general. So it was distressing to realize that’s not an option anymore, no matter where I go. My favourite beach was strewn with debris from the 2011 Japanese tsunami and the amount of plastic debris was astonishing. One of the troubling issues with traveling garbage is non-native species hitching a ride across the Pacific and landing on the west coast of North America.

According to marine biologist Steve Rumrill, of the Oregon Department of Fish and Wildlife (ODFW), two species discovered in the state were on the Global Invasive Species Database’s list of the world’s 100 worst invaders: wakame, a seaweed native to Japan that began reproducing as soon as it arrived in America, and the Northern Pacific seastar, which he described as a voracious predator that could decimate local shellfish populations. While California and Washington have both encountered their share of debris, it is Oregon that bears the heaviest burden. The state receives the most debris out of the three, and complicating its ability to properly respond is that it’s impossible to predict where on its nearly 400-mile coast debris will land. The state could be getting tsunami-related debris for another 10 years. 1

That was all disturbing enough to witness, but it got worse. All along the beaches we saw dead birds, often tangled up in the seaweed and debris at the high tide mark. In some places people had lined them up in several gruesome rows. Since I had not been to the coast in the winter, I thought perhaps this was normal. It is not.

Oregon is the center of many reports of mass bird deaths along the western North American coast [also in British Columbia], and it won’t end anytime soon. The cassin’s auklet is a widespread species along the coast and seems to have suffered the most. In total, hundreds of thousands of auklets have died – a number up to 100 times greater than normal annual death rates. Prof. Julia Parrish, Univ. of Washington School of Aquatic & Fishery Science stated on January 6, 2015, that “this is the worst wreck of cassin’s auklets that we’ve ever seen on the West Coast”. 2

The die-offs tend to peak after a storm, likely because birds already weakened by starvation have a harder time withstanding heavy winds and surf. The prevailing theory is that an unusually fruitful mating season produced so many auklet hatchlings last spring that the young birds have struggled to compete for limited food.

And gruesome auklet deaths come just as scientists around the globe are seeing a significant uptick in mass-mortality events in the marine world, from sea urchins to fish and birds. Although there doesn’t appear to be a link to the virus that killed tens of millions of sea stars along the same shores from California to Alaska over the past 18 months, some scientists suspect a factor in both cases may be uncharacteristically warm waters. In a National Geographic article, Bill Sydeman (a senior scientist at California’s Farallon Institute), said he believes the most likely scenario is that the deaths are related to a massive blob of warm water that heated the North Pacific last year and contributed to California’s drought and to 2014 being the hottest year on record. That water was hotter and stayed warm longer than at any time since record-keeping began. It stretched across the Gulf of Alaska, where a high-pressure system blocked storms, preventing the water from churning to the surface and mixing with air. More warm water eventually moved inward along the coast as far south as California, altering how favorable the environment was for the zooplankton that many fish and birds, including cassin’s auklets, feed on. That all happened in late summer—about the same time the young auklets began to fledge. 3

So here I was, driving down to the Oregon coast for a winter vacation in a car, emitting CO2 which negatively impacts our planet, and witnessing this die-off. The place I’ve traveled to for rejuvenation and relaxation my entire life is now clouded by guilt, sorrow and anger. I never thought twice about the impact of travel as a child or young adult. It wasn’t even on the radar for most of us until relatively recently. I think long and hard about any trips we make as a family – how far, how big is the impact, what can we do to minimize our footprint (such as camp, cook our own food, drink from reusable containers). It’s important for our teens to see some of the world and the changes that are occurring. Last summer we travelled to the Canadian Rockies and experienced firsthand the shrinking glaciers, damaged roads and bridges which are washed out from higher river volumes, and the spread of dead trees as the pine beetle infestation moves into Alberta from British Columbia. In his November 2014 talk called ‘the tipping point’, Geoff Lawton commented on previously taking 20 international flights a year and the impact of that travel https://www.youtube.com/watch?v=1la9ik-MscM

I‘ve been thinking about the scene from the Lord Of The Rings: Two Towers film, when Pippin suggests to Merry that they return home to the Shire as they are too small to make any difference in the coming war. Merry replies:

“The fires of Isengard will spread, and the forests of Tuckborough and Buckland will burn. And all that was once great and good in this world will be gone. There won’t be a Shire, Pippin.”

I can relate to that now. There’s nowhere left for me anymore where I cannot see the impact of humanity and how it’s changing places beloved to me. That’s why permaculture has become so central to my life and planning what I will do. To argue that we cannot make an impact as individuals is simply not true when we have such a huge footprint here in industrialized countries. All I can do is look at my own life, work with people in my own community on local projects to restore what we can, preserve what we can, reduce what we can, to keep some of what is great and good in this world for not only the future, but for right now. What other choice is there?

An Imagination of Stormy Weather