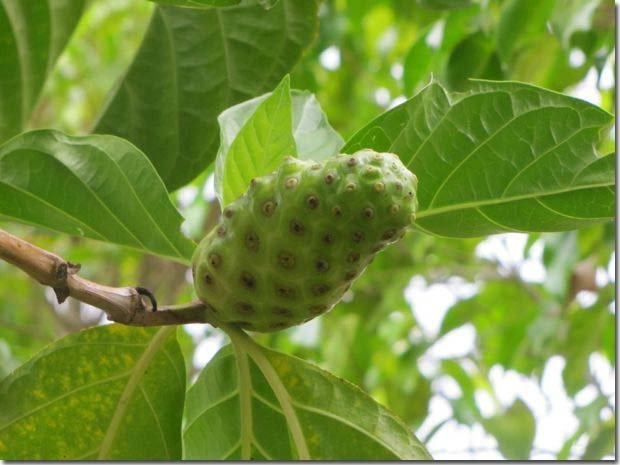 One of the many things I’ve learned thus far gardening in Central and South America is just how many plants are edible and medicinal, most of which people generally don’t use, that we in fact never even think to harvest. Of course, many of us who frequent a site such as Permaculture News have soft spot for multiple-purpose plants, especially those with nutritious attributes, but until recently, I’d never approached it as much more than a curiosity, a sort of fun quirk of growing certain plants. I wasn’t making nearly enough of the forest around me, and wasn’t that foolish!

Starting with salad and double-duty crops

For my wife Emma and me, it started with salad greens. As the tropical heat of Panama prevented growing most of the lettuces and cruciferous salad bases we were used to, we had to search for different avenues, tropical salad so to speak. We discovered lots of plants well suited to the environment and for fresh greens, things like Malabar and Okinawan spinach, as well as “superfoods” like moringa and katuk. But, more importantly, we learned to look at and, even more importantly, use other foods much differently than we had. Many of things we could grow became even more beneficial than we’d previously thought.

We learned to embrace the unlikely uses of many of the things we were growing. Sweet potatoes stopped being just a ground-covering, nitrogen-fixing, easy-growing root vegetable to us, and the leaves became a regular feature in our side salads. Beans were no longer just about enriching the soil and providing legumes for later, but we actually took to harvesting the leaves and using them as salad. And, there were the leaves from our okra plants and other members of the hibiscus family, rosa de Jamaica (locally grown to make tea from its flowers) and cranberry hibiscus. We had show-stopping basil leaves in abundance, so rather than settling for using it only as a bug-repellant and culinary herb, we used it as a salad leaf as well. To stop rattling on and sum it up, our salads eventually became more diverse, and thus likely more principally nutritious, than we’d once been accustomed to eating. 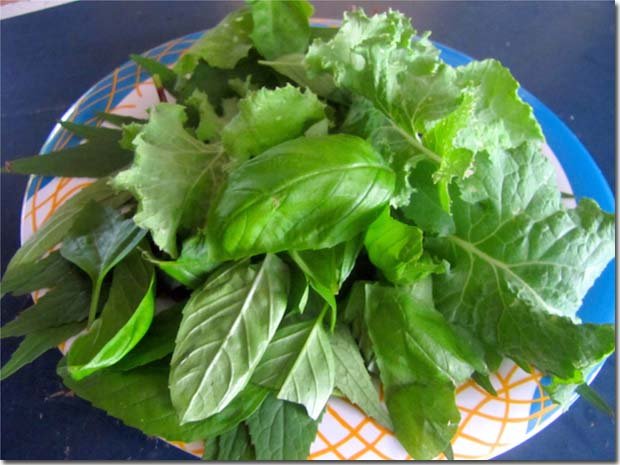 This idea of double-duty crops, of course, was not new to us. As a boy from Southern Louisiana, I know all about turnip greens, probably having eaten more greens than I have the actually crops. But, the tropical salad definitely taught me to consider the entire plant more, to think of one more possibility when growing something for food: Can I trim it for greens? Then, of course, there’s putting that knowledge into use. It wasn’t enough to know something was edible (and delicious), but it actually took actively using those leaves for their utility to become real. Eventually, a walk through the garden wasn’t complete without snacking on leaves and nary a meal went down without a funky collection of greens.

Our love affair with leaves may have started in salads, but it certainly didn’t stop there. We had a lot of typical tropical trees on the go: lime, noni, papaya, guanabana, mango, and so on. With the salad revelation, a new curiosity for what other leaves were useful came to pass, and what we came to realize was that we had highly medicinal forest to forage from. It seemed that just about every tree we Google-d had this unknown cornucopia of healthful qualities. We weren’t making the most of them!

Papaya (pawpaw) leaves are good for heartburn, indigestion, digestion, the skin, Dengue, and more. Guayaba (guava) leaves help with diabetes, allergies, obesity and gum disease, to name but a few. Mango leaves, too, aid diabetics, as well as treating diarrhea, insomnia, hypertension, asthma, and—again—the list goes on. Noni fruit has become popular, but noni leaves are great, too. We used them topically for muscle aches, and they can be ingested for detoxing, boosting the immune system, and so on. Guanabana (soursop) leaves are useful in battling diabetes, rheumatism, eczema, back pain, and more and more and more. We had so many medicinal leaves at our disposal it seemed endlessly inspiring. 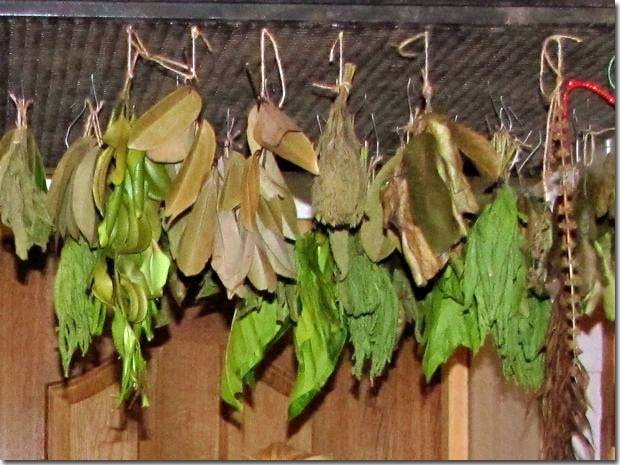 When we’d volunteered at a farm in Colombia, we had a blatant crush on the kitchen there, with tinctures and potions covering the shelves, suspended tobacco leaves and calendula flowers suspended in different states of dehydration. We’d wanted that type of kitchen, and soon we had it, not just for the visual we fell for but with crazy health benefits to go along with it. We used the leaves for chilled teas to go with lunch and hot drinks to relax in the evening. My wife often laughed that we were “going to live forever”, but truthfully, it was hard not to feel a little that way. Our bodies had noticeable benefited from these new discoveries.

The more we explored the sources of salad greens, the more we discovered the extent of accidental food, the edible and medicinal weeds growing around us. One of the delightful discoveries we’d made early on was culantro, which everyone initially assumes is a mispronunciation of cilantro, its more famous relative, which we couldn’t grow. Well, culantro is native to Central America and grew as a weed, all over the yards, ditch banks and just about anywhere the seeds were sprinkled. We ate it atop beans, in salsas, and as yet another snack on those hungry late afternoon strolls through the garden.

We tried to investigate edible weeds (I love this site!) a little further, but we ran into two problems: Not having an efficient means of identifying the weeds at our disposal and not having the weeds we knew of. Dandelions, burdock, salsify, nettles, kudzu, and lamb’s quarter are amongst the common weeds we could recognize and eat, but they were missing from our Panamanian garden. Lucky for us, a volunteer with over twenty years foraging experience in the area came and stayed with us for a couple of weeks. 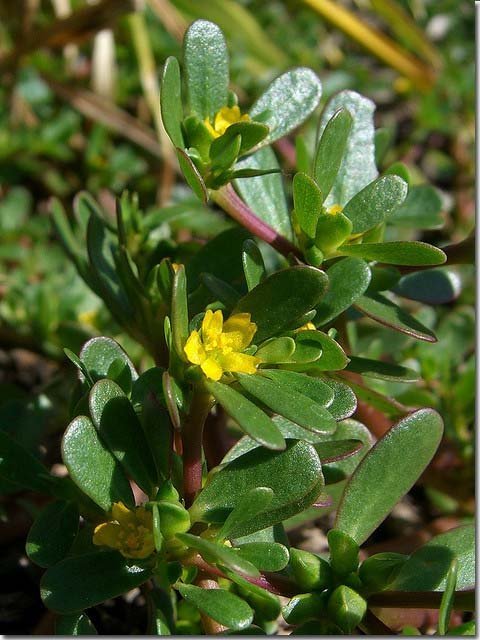 It started slowly, but soon he was finding something wild and wildly useful everyday. Purslane—becoming commonly recognized due to its high omega-3 levels—was growing everywhere, including along the roadside nearby. He came back with clippings of Wandering Jew, the weed version not the houseplant (which isn’t edible), for us to root and cultivate. It’s high in Vitamin C and good in salads. Saragundi leaves muddled into rash cure-all and has been used to repel insects, treat snakebites, and relieve kidney and liver ailments. It was sprouting up all over the place. So, our list of useful plants on site expanded with no effort at all.

I also learned to accept that flowers are much more than eye candy. Of course, they are great for attracting beneficial wildlife to the garden, but many are also edible. Another thing that I like to remind folks when they don’t think growing vegetables would go down well with their suburban neighbors is that fruit and vegetable plants, trees and vines produce some beautiful colors before they get to the nitty, gritty of giving us food. But, that’s neither here nor there when it comes to eating the flowers.

For us, our major effort to get into the edible flower game came more in the form of the seeds we could harvest from the flowers than the petals themselves. We planted sunflowers to eat the seeds but have learned than most of the plant is edible, from the early spouts to the leaves to the buds to the petals and even the immature stalks. We also grew amaranth for the seeds, the tropical version of quinoa, but found out the leaves are good salad greens. Chia was another seed we were after, but the leaves can be used for tea as well. Lastly, tea from the rosa de Jamaica hibiscus calyces (protective layer of the flower bud) is beloved throughout Central America. 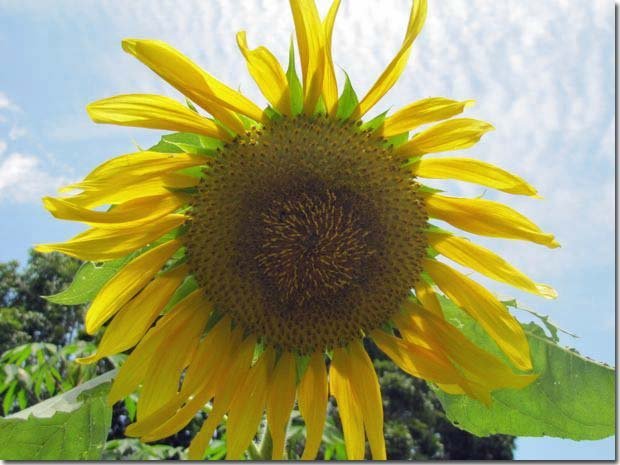 Photo: Sunflower in the sky

But, we’ve tried others elsewhere and would love to try more. While volunteering in Colombia, we got to use lots of calendula and, widely recognized, chamomile. Squash blossoms are famously delicious and have made it to our dinner plates. Rose is a popular flavor in some parts of the world and has become familiar for sweet treats. Dandelion, lavender and violets are all edibles that have made it into the odd salad. Point being, there are plenty of edible delights to brighten up the garden and attract the wildlife. Some of us (me!) have just got to become more accustomed to using them on the plate as much as in the garden.

By no means am I a plant expert, but this new phase of my plant education has inspired me to no end. I can’t look at any plant anymore without wondering what ailment it might cure, whether or not those leaves are tasty, or just how much of that tree can be eaten. The roots? Bark? Leaves? Heart? Flowers? Fruit? So many plants and so many parts of plants can be eaten, providing a great myriad of nutrients, that is just seems absurd much of these foods and medicines go to waste. And, that’s the great revelation of my new edible acumen: I need to learn more, and I need to use what I learn.

Up the Wall (pt 1) : Vertical Interventions in the Concrete Jungle