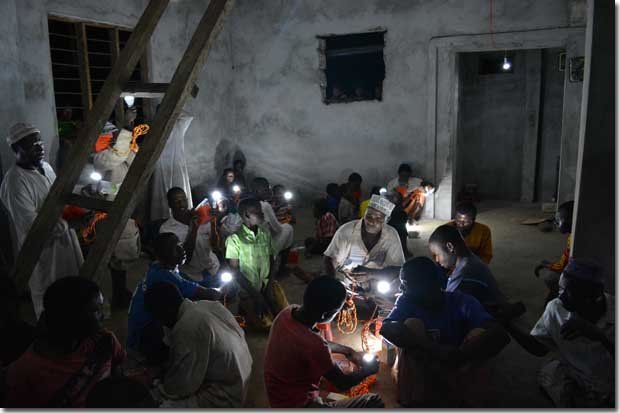 The rise of renewable energy has to be one of the most inspiring revolutions of our time. It offers hope for transitioning to a low-carbon future – a future in which humanity rises out of the smog of fossil fuel dependence to put out a centuriesold fire that is now cooking our planet.

Rapid increases in the efficiency of renewable technologies such as solar combined with their plummeting costs is making this hopeful future increasingly possible. But as wealthy, progressive countries such as Germany lead the charge, proving that indeed the technology to address climate change exists and is feasible on a large scale, other barriers to a worldwide clean energy revolution are turning up. These barriers are largely social and economic, they’re about power of another kind, and they’re keeping clean energy out of the hands of the people who need it most.

Solar power is great, but how do you make this clean energy accessible to an impoverished, isolated community in the middle of the Indian Ocean? How do you deliver energy where there is no grid, where homes are not even wired for electricity? These are questions which inspired the team of Tanzanian and Canadian innovators at Community Forests International to develop the ‘portable
microgrid’ – a DIY solution to community energy production, sharing, and distribution that promises to bring vulnerable communities, and the world, one step closer to clean energy equity.

If you or your community faces similar obstacles, or if you’re just interested in all things renewable energy related, read on to learn how the portable microgrid works. 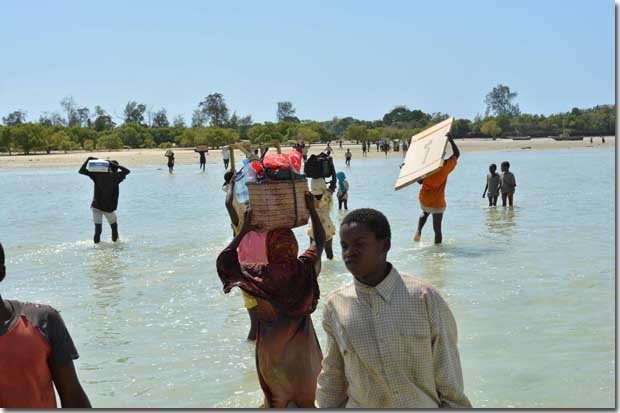 Just a quick disclaimer before we start though – there is no one-size-fits-all microgrid solution for communities interested in generating and sharing their own energy. Many things need to be considered, such as the available renewable energy resources, access to materials, existing infrastructure, energy demand, and the particular types of desired electrical loads. This how-to is framed around the design process that we followed to build a microgrid for a remote island community called Kokota, which is part of the Zanzibar archipelago located off the east coast of Tanzania, and its based on what was locally available and in demand. You’ll have to adapt your own microgrid accordingly!

We set out to design an electricity system for Kokota that would span the entire island and empower every single inhabitant. This meant providing electricity to over 80 homes and three public buildings. The technical limitations associated with a conventional hardwired grid (cost, safety, and efficiency) forced us to come up with an entirely new way of delivering household electricity.

With no previous access to electricity, Kokota’s energy demands were simple; people wanted electric lighting so they wouldn’t have to keep buying and burning kerosene, and they wanted a way to charge their mobile phones. After some head scratching, we calculated that a week’s worth of energy to meet basic demands for a single household could be stored in a small motorcycle battery.
The batteries are locally available and very cheap (~$15). They’re also very portable. This, we realized, held the key to freeing Kokota from the limitations of a hardwired grid. The community could generate renewable energy collectively at a central location and then distribute it via a fleet of small carry-home batteries – a ‘portable’ microgrid. 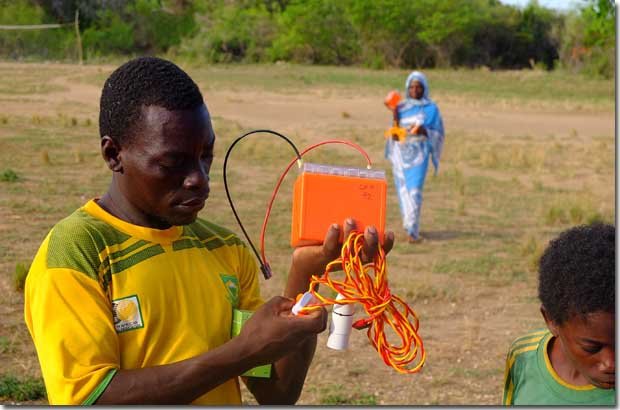 Every household on Kokota was given an identical home lighting system which consists of a 12 V motorcycle battery with a capacity of 7 Ah and an LED lighting fixture. The fixtures were low cost and assembled from readily available materials: 12 V LED light bulbs, a switch, 16 gauge wiring, and a connector that mates with an identical connector hardwired to the battery. The connectors ensure the polarity of the system cannot be reversed and the battery cannot be shorted. The LED bulbs have an output of 3 W, which is sufficient to illuminate a small room.

When the battery is discharged, it is brought to the central charging station where it is recharged using solar energy. This shared energy hub is housed in the Kokota school, located in the middle of the island and easily accessed by the whole community. The system that powers battery charging also provides power to the school itself, to a communal rainwater pumping and purification system, and to a public mobile phone charging station. 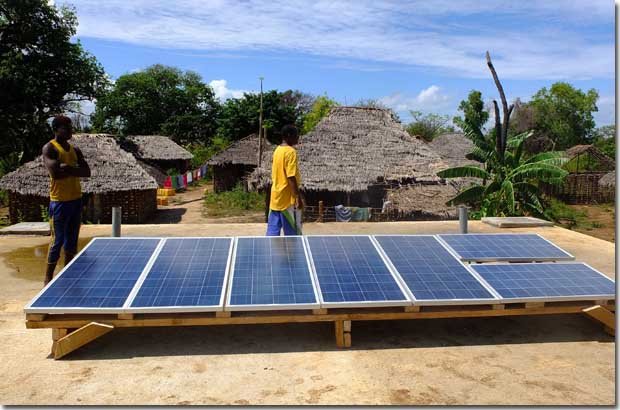 The source of electricity for Kokota’s portable microgrid is a 700 W array of solar photovoltaic (PV) modules. There are seven 100 W modules which are wired in series to minimize losses due to Joule heating. A 150 V / 70 A MPPT chargecontroller maximizes the power output from the PV modules and uses it to charge a central, “stationary” battery bank. Four large 12 V / 165 Ah valveregulated lead-acid batteries (aka “sealed batteries” or “gel batteries”) make up this stationary battery bank and are used to store excess solar energy and dispatch it as needed. The PV system and battery bank capacity were sized such that they can maintain enough energy to charge 20 portable household batteries per day and provide power to the school, rainwater system, and the mobile phone charging station for several days of overcast weather. 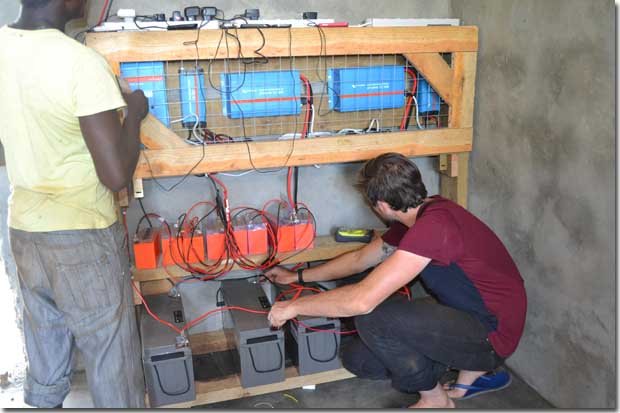 Two 800 W inverters convert the 12 V DC power from the batteries and solar modules to 220 V AC power. The motorcycle battery charging system requires AC power and is made up of two individual 12 V battery chargers. Each is capable of charging up to 8 motorcycle batteries at a time, a process which takes approximately 4 hours total. The public mobile phone charging station also uses
220 V AC power to charge up to 18 phones at a time. All of the power electronics and solar equipment was purchased in Dar Es Salaam, on mainland Tanzania, and transported to Kokota islet by dhow sailboats with the help of the community.

According to the Rocky Mountain Institute, small scale renewables now provide close a quarter of the world’s electricity1. Mircogrids are gaining ground too, and there are now over 388 remote microgrid projects worldwide2. Community Forests International plans to add to both of these scores by bringing its pilot project up to scale and building portable microgrids in another 18 rural island communities in Tanzania over the next 5 years. Open source sharing of our ‘how-to’ will hopefully inspire even more widespread adoption, helping needy communities around the world to leap-frog convention into a decentralized, renewable energy future. 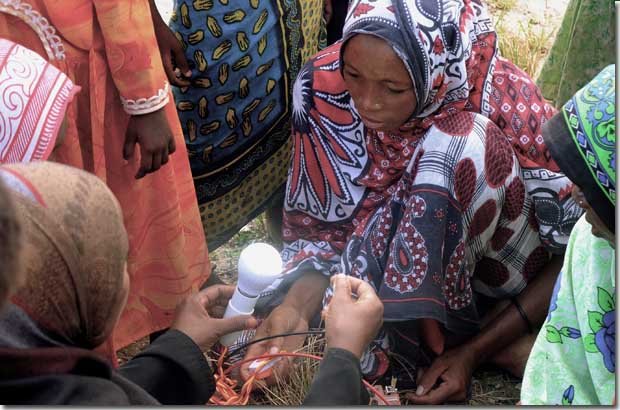 This sort of equalizing technological shift isn’t unprecedented – it just happened with cellphones after all. To make it happen with renewable energy technology we need solutions that address not only technical constraints but also the unique social and economic barriers of marginalized and isolated communities. The portable microgrid is an innovation inspired by those very limits, and successfully piloted by one of the most vulnerable communities on earth. You know what they say – necessity is the mother of all invention.

What other hopeful innovations could communities living on the front lines of scarcity and climate change offer to the world? To learn more about Community Forests International and it’s fledgling Rural Innovation Campus on the island of Pemba, Tanzania please visit: www.forestsinternational.org 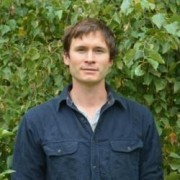 Permaculture in Practice by ‘Hope On Africa Programme’ – Kenya