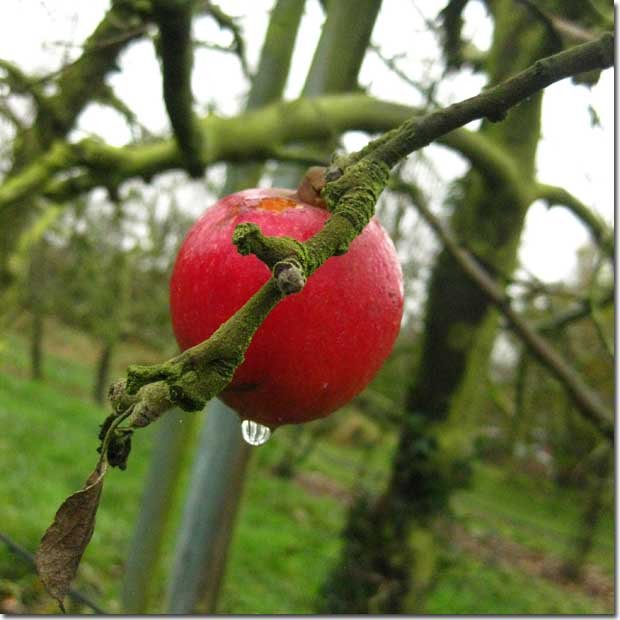 Last week I joined one of the final (for now) in a series of trips between France and England in order to promote biodiversity, preservation of cultural heritage, and, some might say crucially, the joys of eating and growing high-quality food. The exchanges, which are a part of the project Orchards without Borders (Vergers Sans Frontiers) (1), were organised by a mix of British and French organisations with help from Interreg (2), an EU programme designed to stimulate cooperation between EU countries, in order to “promote the use of orchards as part of a sustainable food system” (1).

The visit in which I participated was arranged by Evelyne Ramon of the CPIE (Union Nationale des Centres Permanents D’Intiative pour L’Environment) (3) in Normandy, and Anne-Marie Bur of the Brighton & Hove Food Partnership (4) and Brighton Permaculture Trust (5).

During the trip I learned a lot about how sustainable food systems are already being nurtured, as well as some exciting ways in which we can develop our food systems more sustainably, whether in France, England, or further afield.

The English team was made up of members of the Brighton and Hove Food Partnership (4) and the Brighton Permaculture Trust (5), both based Sussex, South England, an area which historically has a tradition of growing fruit trees, although counties such as Kent, Herefordshire and Worcestershire have a larger acreage of orchards (see for example 6).

In the interest of strengthening cultural ties the part of France chosen to concentrate on is Normandy in North West France which also has a rich cultural heritage of orchard-growing (7). The CPIE in Normandy is part of a national association which encourages sustainable development and environmental education (3).

In both areas, however, this tradition has been in decline over recent years for a number of reasons to do with the way in which our food systems have evolved and general trends away from locally-grown, many-varietied types of fruit and vegetables towards nationally or internationally distributed foodstuffs. In the UK in particular, orchards have been declining quite dramatically recently, with a 2009 study finding that England lost approximately 60% of its orchards between that year and the 1950s (8).

With such vanishing we face not only the loss of choice of fruit varieties but also the decline of the rich diversity of life which can flourish in an orchard. This can contribute to loss of habitat and even species. Many things which can be found in an orchard contribute to the ecosystem in subtle ways, much in the same way as in a forest, and enrich the environment for humans as well; though in intensive fruit-farming they are not necessarily present (see for example 7).

Many interested in permaculture will be familiar with the idea of growing a forest garden and all of the reasons why this can benefit you and those around you. These include the decrease of maintenance every year, the creation of a rich and diverse ecosystem and the possibility of at least partial self-sufficiency meaning that you can take control of your own consumption of food (see for example 9). These benefits can also be present with orchard growing; though not necessarily the case with all orchards, the great thing about tree crops is that they do not need to be re-planted every year, but keep producing bigger yields, as long as they are looked after correctly.

One reason we choose orchards as a way to promote these benefits is the cultural heritage inherent in this type of food production. Ask anyone from Normandy or Sussex about edible forest gardens and they may well scratch their heads in confusion; however, most have heard of orchards and this familiarity is important when helping communities to build more resilient food systems, as they can feel as though they already know and understand the ideas behind them so will probably be more open to them. 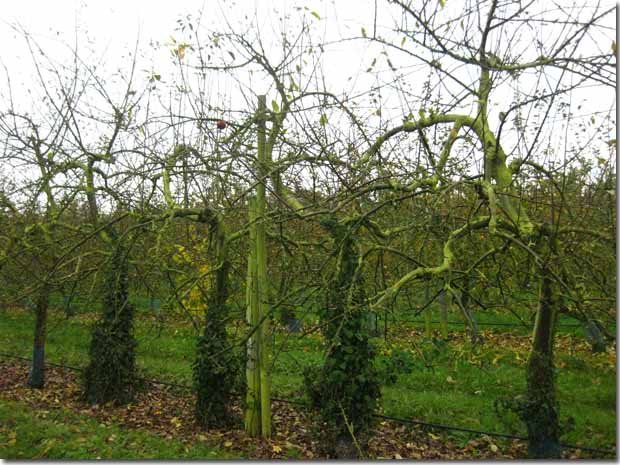 When grown considerately, farmers can maximise the complex interplay of relationships between plants and animals in the orchard, and encourage habitats for species as well as utilising integrated pest management in order to naturally deter pests by introducing their predators. The methods for farming in this way are varied and are by no means all totally holistic or even chemical-free.

One thing we learned from the trip was that in Normandy the tradition of farmers keeping orchards has persisted more than in the UK and since there are still many small orchards in operation, each one is highly personal to the farmer keeping it; there are as many methods for growing orchards as there are orchards. This is helped by the Norman tradition of keeping animals and growing apple and pear trees as well, so that there is a diversity of incomes from the farm.

We also learned about a type of double-grafting in use in Normandy by top working at 2.4m which allows them to plant out the tree (with some protection from metal strapping around the stem) and immediately undergraze with cattle/sheep as the branches and fruit of the tree are well above the grazing line.

This use of the ‘multiple elements for every function’ principle means that as farmers do not base their entire livelihoods on the fruit, they are somewhat freer perhaps than those who do to experiment with different varieties of apples and pears and styles of growing. For example, one farmer we met has stopped buying in the conventionally-used imported maize and soya as cow feed and instead allows his cows to eat the grass under the fruit trees and the fruit pulp. Such practises encourage exploration and integration with the environment; and financial gain as well as ecological, so it is recommended even for those whose first consideration is monetary profit (for more on this see for example 11, 12). This could be extrapolated to other parts of society or anywhere people are encouraged to focus their energies on just one thing whilst ignoring their connection to the whole.

Some have claimed that this focus on specialisation can be highly detrimental, for example Buckminster Fuller (inventor of, amongst other things, the geodesic dome), who says that with this focus, “Humanity has been deprived of comprehensive understanding. Specialization has bred feelings of isolation, futility, and confusion in individuals. It has also resulted in the individual’s leaving responsibility for thinking and social action to others” – R. Buckminster Fuller, 1975 (13).

Even if you do not agree fully with this it can be seen that orchards play a key role in helping to promote diversity not just of plant and animal life but of human activity as well; although they clearly are not the only means of encouraging this.

As part of the exchange we were involved in planting trees, visiting orchards, and being present at another school – Ecole Jaques-Prevert at Ferté Macé – for the presentation to around twenty-nine children of some apple trees which they had personally grafted the previous year.

It was not all about the trees, however. We also explored all the different products one can make from apples and pears, including learning how to make traditional Norman apple pastries and an in-depth explanation of cider production. The understanding was that an orchard is much more than simply something for farmers to be interested in. The things provided by an orchard are useful for everyone, and it was very encouraging to get such a holistic perspective on this.

We spent one day of the trip at l’ecole de Ste Georges de Groseillers helping to teach children; though the educational aspect definitely went both ways and we were learning just as much as them. One thing I found interesting was, in a school with fruit trees in the grounds in a part of France where orchards are a deep tradition, when we asked the question ‘in which season do we pick apples?’ less than half of the class knew the answer. Perhaps they were simply shy; it did make me consider more the importance of observing the seasons and sharing this with our communities.

Of equal educational value was the culture in which we were immersed for the days of the trip. Everywhere we visited we were welcomed warmly, and regardless of the time of day, invited to share in food and drink. I got the impression that in general, sharing food together is a more important part of culture in France than it is in the UK; most places take at least an hour for lunch breaks, for example. Even more significant than this was the spontaneous warmth which we experienced at every meal. We may not have been able to fully appreciate this aspect of the cultural exchange had we not been fully open to sharing; something which we can continue to be in our lives back home. 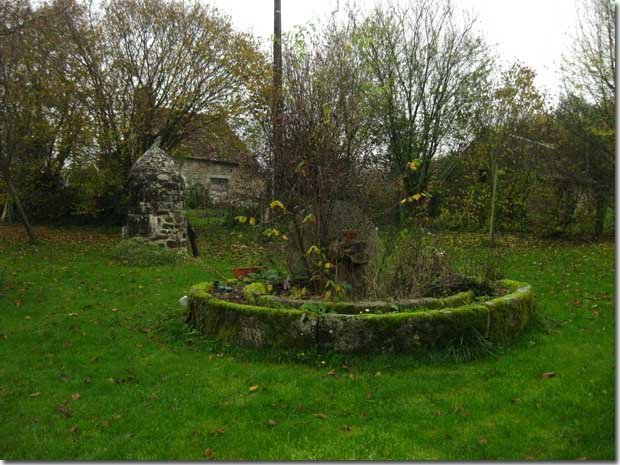 Orchards without Borders helps to promote the importance of planting fruit trees. This is symbolic as well as practical; as tree-planting, if you wish the trees to succeed, is an activity with many follow ups over a number of years; if you care for your trees well, potentially an entire lifetime. A reminder of this came at the school where children were presented with the trees they had grafted. Before receiving the trees each child was requested to sign a contract stating that they would plant the tree in a considerate and appropriate place and continue to care for it after it was planted. Though such a contractual agreement may not be desirable for all of our transactions, bearing in mind the impact of our activities and accepting the responsibility we have for them in this way could be a key in helping us to interact with our world in a more beneficial and caring way.

Whether you are planting trees physically or just symbolically, you can be a part of this process as well. The Orchards without Borders cultural exchange extends beyond England and France; anyone who feels inspired by these actions can be a part of the growth of a new and healthier culture.

1. Thanks to Peter May for clarifying some points about the trip and about fruit tree growing

2. For more about the Orchards Without Borders trip you can see my blog post on it here: https://abundancedancegarden.wordpress.com/2014/12/11/orchards-without-borders-exploring-diversity-and-culture/

Permaculture in Practice by ‘Hope On Africa Programme’ – Kenya