Fuzhou, a city near the coast of southern China, has seen a flurry of a decade or so of rapid development. It is evident in the glass and concrete forests of tower blocks — many newly completed and still uninhabited and many more under construction. I’m driven through the city to the rural fringe where I’m teaching a PDC (Permaculture Design Course) in a small village on the edge of the metropolis.

I arrive a half day late due to delays getting my mainland visa in Hong Kong, so my co-teachers have the course already in swing. I’m just in time for lunch. There are 49 participants from all over China, including Mongolia and Tibet, plus a few from Hong Kong and Taiwan. They come from all walks of life; farmers, property developers, community workers, teachers, interior designers, housewives.

Hui-I Chiang and Peter Morehead from Taiwan are my co-teachers. Actually, they were invited to teach the course after conducting an introductory permaculture workshop in Fuzhou earlier in the year and insisted I come and support the training team. Hui-I and Peter convened the first PDCs in Taiwan and had my course notes translated into Mandarin. We’ve worked together for five years.

China struck me as a country of extremes; extreme affluence, extreme poverty, extreme development, extreme degradation, extreme pace of change. People are abandoning the countryside to move to the cities for work and better wages. The fields of rice, sweet potato and market garden crops surrounding the village are not being farmed by locals. The locals commute to the city to work and the farming is now done by people from other provinces as a stepping stone to moving to the city. Participants tell me there are entire villages and surrounding tracts of farmland abandoned for the rush to the city. “When there are no more farmers, who will grow our food?”, was commented by more than one participant.

They were serious students, searching for real solutions and I sensed many were really committed to making big changes. There were a few English speakers in the group and it was interesting to gain insights of life in China from conversations with participants. The pace of change has been rapid, many are questioning the nature of development, and awareness of the scale of the environmental issues they face is growing — concerns about pollution, quality of air, water, food, and social inequity.

I came across a recent article in The Guardian suggesting that the future of the planet largely depends on which way China decides to go. While China is the largest emitter of greenhouse gases, it’s also the world’s largest investor in renewable energy. There are serious conversations between government and industry on the need for sustainable and ‘green’ development and cleaning up China.

One of the course participants is already pushing urban sustainable development to a new level of innovation and is excited about the potential for permaculture to take this cutting edge further. I’ve been invited to do some preliminary consulting on a project in the city of Shenzhen.

It seems like perfect timing for China to discover permaculture as it enters a critical period of transition, though this course is such a small drop in a very big ocean. I’ve been promised this won’t be the last time they’ll be wanting me there to teach and provide advice on sustainable directions and regenerating damaged landscapes.

Syria Back-Story, Part I: Internal Displacement and the Story Framework 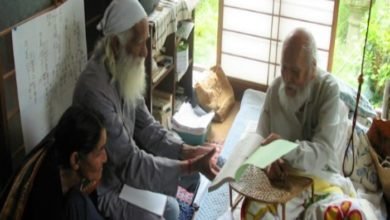