People are awakening to a vision where they can see themselves as less stressed, having more quality time to spend with family, and real food laced with nature’s nutrition. Our great grandparents and, for some, grandparents could have told you of a time when there was no such thing as a supermarket. As a point in fact it was not until 1915 that Vincent Astor came up with a ’mini mall’ that was the basis for supermarkets. The idea eventually morphed into the modern supermarket; the first one named King Kullen, inspired by the movie King Kong, in Jamaica Queens, New York City — to which their slogan was "Pile it high, Sell it low". It seems that even in those days the idea of quality over quantity was fading in the eyes of the store owners. Today we have a new infusion and influx of curiosity about what goes into our food. Mothers and fathers from the generation of growing up on McNuggets (the 1980s babies) are seeing the deterioration of health en masse in most countries. Most of the world has now heard of organic foods and many are switching to an organic food based diet.

The organic movement really started within the green movement in the 1940s. The term ‘organic agriculture’ was coined by Walter Ernest Christopher James, 4th Baron Northbourne (long name I know) in his book Look to the Land. Interestingly enough, Walter Northbourne was a major proponent of the work of Rudolph Steiner’s and Ehrenfried Pfeiffer’s called biodynamics. Which for those of us who study in patterns of design, this is quite interesting.

The call to take the toxins out of our food is the basis of organic farming, which we as a society should really applaud as it is not an easy feat to go up against Big Pharma. However after studies on both sides of the fence for and against organics have shown, there has not been major differences in nutrition in organically farmed produce and animals to that of conventionally grown crops. And to top that off, many organic farmers are still using conventional shaving of ecosystems — irrigation, planting, and harvesting practices which will ultimately end in enslavement and debt to the organic farmer. Thus will also lead to deforestation and salted deserts.

There is also an overwhelming amount of evidence showing the link to mental disorders, obesity, cancers, high blood pressure, and a myriad of other health related issues due to current toxic conventional farming systems.

I want to point out that either consciously or subconsciously there appears to be an awakening. Thanks to millions of people who are out there Marching Against Monsanto, or a new wave of interest from young people to get into sustainable and regenerative farming, or restaurants both big and small now offering quality organic ingredients because their market demands it, things are slowly changing. What will happen next?

Nutrient dense food is the next stage of our food pledge. To do this en masse we must utilize permaculture systems, as these systems never need artificial fertilizers or the use of chemical pesticides or herbicides. We must take responsibility for what we want to eat and how we want to feel. The easiest way to do this is to turn your home into a permaculture system. It does not matter if you live on 500 acres or more, or a sub-acre suburban lot, or an apartment in an urban sprawl. These systems can and will work for you. Some may ask how we can know how much nutrition is in the food grown on my property vs. the food bought at conventional supermarkets vs. organic foods? In this case there is a tool that anyone can purchase called a refractometer. It is simple to use and measures the amount of nutrients via sucrose levels. This type of reading is called a Brix reading. An example of conventionally grown carrot may have a brix reading of 5. An organic carrot may still be at 5 or up to 8 (there have been higher numbers measured). And a nutrient dense carrot will start at 12 — with many tests gauging at 18 for being the average result for food grown in a permaculture system (that is a very good number to be at). In New Zealand, Kay Baxter of the Koanga Permaculture Research Institute is using amazing permaculture systems and even trying to reach a brix reading of 30.

However, no matter how many facts we see, or inspiration gathered, or even how sick we are, there are still those not ready to take that step into food freedom by creating a home based permaculture system. Even in these cases, we then must rally for the re-localization of food. At the outset of this movement we must get to know our local food growers. Show them our interest in nutrient dense food and why it is far better than organic and then tell them how they can achieve this by using permaculture practices. If they have never heard of permaculture then at that moment would be a good time to let them know about permaculture and its regenerative methods and give them information about a permaculture school/teacher in their area — or at the very least a permaculture design consultant.

We must really put an emphasis on wealth and its true definition. Our health, and that of our children, is the motivation that will take us to the next level of food integrity. 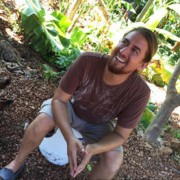