Walking Backwards into the Forest. Photo by David Ashwanden

For a huge number of permaculture enthusiasts, the places where we live are not nearly wild enough. When it comes to paved yards, rigidly laid-out fields and neatly weed-free lawns the reaction can be quite a radical pull in the other direction as we try to re-weave together our “civilised” cultures with the half-forgotten but still ever-present naked forces of nature.

From this perspective, planting and cultivating a forest garden – a place which provides food and other useful things to us but which can be left more or less alone as a wild entity in itself – seems to fit the bill perfectly. If our space is limited, we can utilise multiple levels such as plants climbing up walls, and things like dwarf fruit trees to increase the productivity intensity even on a small scale.

With ideas like these, your space need not be more than a few metres square; all you need is an initial input, a couple of years wait, and a lot of love and… there you will have it, a flourishing wilderness tailored to provide for your human needs but able to be left without much maintenance as a delightful reminder of the abundance of nature in its raw state, at the same time. Edible forest gardens have myriad advantages and opportunities for you. They are easy to maintain, abundant, beautiful and beneficial to existing ecosystems. They can help the “designer turn into the recliner” as Bill Mollison (The Global Gardener, 2008) puts it. What’s not to love?

I was certainly sold on the idea. I wanted new forests, everywhere.

Visions abounded in my mind: city parks bursting with cheerfully ripening plums and apples while blackcurrants and raspberries spread underneath. Or those giant glass and steel tower-blocks we see in many of our towns filling slowly but inexorably with, in place of identical rows of desks and coffee machines, enthusiastic banana trees, passionfruit vines and thousands more species of all kinds — the ultimate city greenhouses. Spaces, spaces: there are so many spaces in the world being used, it seems, inefficiently, which could be filled with useful and beautiful life… if we let them.

But then, I ended up living in a community on the side of a mountain; 900 metres above sea level and half an hours’ walk from the nearest road, in the middle of Spanish designated natural parkland. And when I began looking around for my space to fill with life – well, I noticed that life seemed to have snuck in there before me.

All of my usual ideas for what to do with a space – the encouragement of more wilderness – got turned upside down. The space available to me had been masterfully terraced and flattened out by the last people who were cultivating these mountains; so in all probability the Moors or Arab rulers of Spain, who implemented many changes on the Spanish landscape in the form of terracing, aqueducts and viaducts and the introduction of countless plant species, but who were last in power in the middle of the sixteenth century. Since then, the land had been more or less left to itself; the occasional human swipe at the encroaching wilderness having only a temporary effect.

When I got to the land (a bit later than the Moors) the terrace was barely discernible. Vigorous bramble branches twisted and reached in front of me in incomprehensibly complicated interweaving patterns; their quest for space being combated energetically by exuberantly spreading creepers: jasmine, grape, passionflower and more. Half-glimpsed through the dense thicket of spikes and curled vines were gnarled branches progressing into the gloom; suggesting that hidden within this maze there were probably entire trees – from the outside, totally invisible. I’d found my forest garden — but it was not exactly what what I had been expecting.

On the one hand, here I was, forest garden already there, and in all probability teeming already with fruit – if I could only get to it. On the other hand, there was plenty of other food and medicine which I was keen to grow if I wanted to stay in such a remote environment, but which needed a place for me to plant it in. It was mind-boggling to think about at first, but it looked like, this time, there was just too much forest.

After careful consideration, I decided to go for it. I set about hacking, uprooting, ground-shaping and swale-digging. Contrary though it was to my previous convictions, I was creating a backwards forest garden.

The first thing I wanted to do was to create a design plan of what I wanted to grow. The overall idea was to clear away the thickest parts of the jungle, then plant up what would eventually become more forest, although slightly less chaotic.

But before this, I had to see what was actually available for me to play with. And so, armed with gardening scissors and pickaxe, I set to work gradually clearing out some little spaces in the midst of the thicket.

As I pulled down and uprooted bramble after bramble, digging up some roots as big as tree roots and hacking my way slowly through, I began to realise the true potential of this forgotten space. Even though the bramble patch had seemed inconsequential from the outside, once I actually began clearing bits of it away I saw the full potential of what could grow there. The brambles and other plants had been busily shading the soil and dropping their leaves into it; creating a thick, mulchy forest floor of earth, seemingly perfect to begin planting in.

One thing I decided to play up a lot was the garden’s inherently hidden nature. For me, playing in secret places has a certain charming appeal, so it was extra exciting to leave as much of the thicket as possible as a screen around the garden and between different sections. Another advantage to this was that the screen discouraged not only other people, but also pests such as passing dogs and cats.

When completed, these became four different mini secret gardens, separated by tunnels through the thicket – some large enough only to crawl through. A true garden adventure. Pointing out the Hidden. Photo by David Ashwanden

The ideal soil and the ease of hiding the garden got me thinking — it is not only halfway up a mountainside where nature has crept back in to take over the spaces we inhabit. Think about it. Where have you seen overgrown weed patches and crazily spreading brambles? Around your country? Your region? Perhaps, even, very close to your house?

Of course, if you already have enough space to grow the things you wish to grow, it is much less effort to use this than to begin hacking. But if you have dreams of more gardening, well, perhaps next time you spy what looks like simply a messy disused thicket… you can try investigating it. You’ll be surprised at what you could end up making.

Food from Perennial(ising) Plants in Temperate Climate Australia, for August 2013

Nitrogen-fixing for All Crops Not the Answer 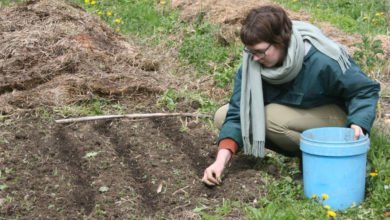 May 2, 2019
Check Also
Close
PRI Newsletter
Get the latest permaculture news stories straight in your inbox