A swale dry rock wall built by WWOOFers and revamping some garden beds.

To further improve our kitchen garden swales, we have rock-walled a number of them. This stops erosion of the garden beds, since soil falls or is washed down into the swales. It also creates a beautiful frog and lizard habitat, and levels the garden bed, instead of having it on a slope.

By using the combined resources of WWOOFers and our creek rock, and PDC student Andrew’s experience in rock walling (he showed the WWOOFers how to build the dry rock wall), the swale rock wall took only three days to build. This included getting rock from our creek bed, sorting the rock and laying it. It has made the garden bed more functional and more productive, and as we build the soil and raise the garden beds we can add more rocks to the rock wall to keep all the beautiful soil where it belongs — in the garden bed. We also added sawdust, a waste product available at our local sawmill, to cover the path and to stop weeds. We use sawdust for all our kitchen garden paths, to slow down weed growth and to create defined borders. Sawdust breaks down over time and becomes part of, and adds carbon to, the soil. The next project was to make the carbohydrate garden beds below the freshly rock-walled swale more productive. There was a sweet potato bed there, that produced more leaves than root, and other beds further down had gone to weeds. Scott, another WWOOFer with us, cleaned up the beds. Everything was removed from the beds, then the beds were fed with our beautiful homegrown compost. The main bed took four wheelbarrow loads of compost! We are also preparing the swale below that bed for another rock wall, so all that compost can stay on the bed, instead of being washed away…. Tom planted potato and sweet potato in those beds, getting some carbs ready for our next PDC course! 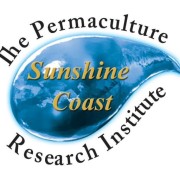